Extending shop local retail positioning through co-operatives.   While the co-operative business movement started in the 1890s, and some large organizations (such as Nationwide Insurance) are still organized that way, especially businesses serving farmers (e.g., Land O' Lakes, Southern States Co-operative), and rural electricity systems (some exurban sections of Metropolitan Washington are served by rural electric coops), for the most part retail businesses aren't run as co-operatives, with a couple of exceptions.

Rural retail coops.  In some rural communities, some places are coming together and reorganizing retail ventures as cooperatives to ensure the continued provision of certain types of retail categories.

Food co-operatives.  And the "food co-operative" grocery store movement came to the fore in the 1970s and continues today.  In some areas of the country, food coops are big business, such as the PCC Natural Foods Stores in Greater Seattle and generally in Minneapolis-St. Paul, where many major grocery stores are co-ops, including the Wedge, and where 12 coops join together to publish The Mix, a magazine serving all of their members.

The DC area doesn't have many food coops.  There is the Greenbelt Coop, a business co-op, Glut, in Mt. Rainier (the members of the co-op in a business co-op are the employees, not the customers, actually some taxi companies used to be organized this way, to serve taxi drivers) and the Takoma Park-Silver Spring Co-op, which has their main store in Takoma Park and has just closed their Silver Spring store after many decades of monthly losses.

But some people who were members of the Silver Spring store want to try to reopen it ("With co-op store closed, board member gauges possible interest in a new one" and "Takoma Park Silver Spring Co-op closing Silver Spring location," Gazette).

I am not sure that's a good idea, at least in the current location, which is distant enough from how people in Montgomery County seem to get around so that the store didn't get enough retail traffic to be successful. 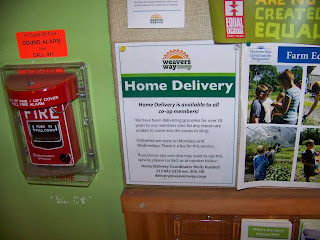 Weavers Way in Philadelphia and the Mount Airy commercial district.

But this makes me think about the Weaver's Way Co-ops in Philadelphia ("Weavers Way co-op looks back at 40 years in Mt. Airy," Newsworks), and specifically their original story on Carpenter's Lane in Mount Airy.  (More recently the Mariposa Co-op organized to serve a different part of Philadelphia, a more lower income area of the city.)

For the past few years, WW has had two stores, because a couple years ago they opened a second store in Chestnut Hill, an upscale neighborhood and reasonably thriving commercial district on the border of Philadelphia and Montgomery County.  The two stores do over $20 million in sales each year, which for a coop is very good.  (The Wedge in Minneapolis has gross revenues of $36 million, although it is in a denser location on a main arterial.)

What is interesting though is how the Mount Airy store has ended up anchoring and developing what we might call an "ethical"/shop local/self-help positioning for the micro-commercial district on Carpenters Lane.

Over the years the district has added a book store, Big Blue Marble Bookstore, which is still successful, a cafe, Philadelphia Salvage, a building materials resale shop, an acupuncture clinic, has kept its dry cleaners, has a cafe, a gallery-arts education operation, a toy store-children's clothing resale shop, and the Co-op has moved its health and beauty and vitamins section to a space across the street--and has since added pet foods to that space as well.

The district works.  More food co-operatives could probably work to achieve something similar, in order to build more successful operations.

I'm not sure the Silver Spring location of TPSS has that potential.  The other spaces are pretty much leased up to a health club, paint store and a couple of restaurants (one, Parkway Deli, is one of the only decent delis around, which is why I am familiar with the shopping center).

But maybe there is another spot in Greater Silver Spring that provides a better opportunity.

In any case, both Mount Rainier around Glut Food Co-op, and Takoma Park in the Takoma Junction area around the TPSS Co-op, also have that potential.  Both are in areas where the rents are lower than elsewhere in the region, which helps to seed innovative concepts, although the retail store spaces tend to be quite small.

Although even successful co-ops still have issues.

Although even successful coops can have internal (the Wedge co-op fired its general manager even though the business was thriving, see "The Wedge Co-op hopes for new beginning: Workers and management try to resolve differences after a contentious year from the City Pages) or external problems (the Park Slope co-op in Brooklyn experiences a great deal of food theft by members, see "Reality Intrudes at a Utopian Market in Brooklyn, With Light Fingers" from the New York Times).

"Fair Trade City."  Another way to distinguish a commercial district along these lines is on fair trade.  I've mentioned before that Media, Pennsylvania does this.  Also see "America's Only Fair Trade Town: Media, PA" from TreeHugger.

I've thought for awhile that Takoma Park could work to do something like this, especially in Old Takoma.

Because convenience retail has pretty much exited local commercial districts, this kind of repositioning might be the only way to stabilize these districts in terms of the sale of useful goods.

With Mount Airy, I thought it was pretty interesting how WW calved off the HBC lines, especially because vitamins tend to have the best profit margins, but added the pet food line.  The book store has a great selection of books, runs lots of events, etc.  The stock is always changing at Philadelphia Salvage.  And the toy store-clothing store is a great idea because kids go through clothes so fast and the resale dimension provides good reason to return to the store again and again to check out what's available.

And there is no question that Media's positioning is distinctive too.  With the continuing shift to big box retail, such positioning offers an edge, although such positioning matters only to the people will to pay more for goods, using ethical criteria, and this is a small proportion of the overall market.

We do not have a lot of co-ops here in the Bay Area, but we to have a lot of independent grocery stores. These are successful and different types of neighborhoods but mainly those with a walkable Main Street. Some stores have premium pricing and goods while others are middle if the road. To local independent stores, Berkeley Bowl and Farmer Joe's have opened second, larger, stores in the past few years.

Interesting. I wonder why that is? I did get to check out Harvest Urban Market when I was out there last year, and I was impressed. I wanted to go to Bi-Rite but wasn't able to do so.

E.g., in the Intermountain area you have Associated Food Stores, http://en.wikipedia.org/wiki/Associated_Food_Stores

In the Mid-Atlantic, there is the Wakefern Corp. (Shoprite), which is particularly strong in NJ and PA and is moving down into Maryland some. Etc.

Great post on Food co-ops as potential anchors of "ethical commercial districts". I have to appreciate your post & content flow. I found this post will be very useful for readers. Keep Posting useful posts like this. Get in touch with us via our websites vegetarian restaurant | sweet shop

thank you for sharing this valuable information vegetarian hotels in chennai

Thanks for share this article.
Business ethics is one of the most entangled and antagonistic subjects in mankind's history. The connection between making the best decision and bringing in cash has been contemplated by the two scholastics and business pioneers for a considerable length of time with little consensus came to.
go here-"online pharmacy"