For various reasons, I don't think electric cars are "the solution" to climate change.

The real "solution" is a lot less driving, and greater use of sustainable mobility modes--walking, biking, and transit.

Which is what is discussed in the book Green Metropolis, that sustainability is best accomplished by spatial organization, concentration, and density.

Plus, the technology and rare earth minerals required to make electric batteries cost effective are expensive, and the cost of creating and supporting batteries may make the return on investment for electric vehicles perennially negative, except for tax credits and other subsidies.

Unless, like in Europe the taxes on gasoline are very high, which makes alternative fuels competitive, when gasoline costs about $8/gallon. 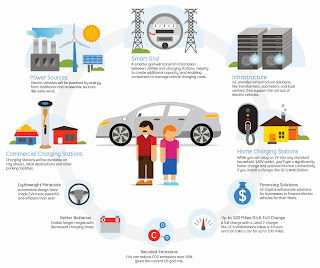 But regardless, for electric vehicles to make sense, a support system has to be created, just as one was created to support the gasoline-powered motor vehicle.  The issue is creating the system, the death of Shai Agassi's idea notwithstanding ("Shai Agassi Weighs In On The Lessons Of Tesla & Electric Cars").

Bumps along the way

1.  Man arrested for using 5 cents of electricity at a public school charging station.  See the AP story "Father arrested for charging his electric car at school.  He spent 15 hours in jail.  Eventually, the charges were dropped.  From the article:


It's not clear how much electricity he used in charging his car, but Kamooneh said it was likely to have been worth only a few pennies. The former university professor turned investment advisor told ABC News: 'I'm waiting for them to arrest water drinkers and cell phone chargers.'

An interesting tv ad from Nissan

Nissan has a good ad, called "Errands" that's meant to address what is called "range anxiety"--that people will be traveling such a distance that goes beyond the charging range of an electric vehicle.  It makes the point that most people drive 29 miles or less per day.  I've only seen it once though.

I like the graphics in this about typical trips, and think that the same basic concepts pertain to sustainable mobility, and could be used in an ad that sells sustainability.


Municipalities are looking at alternative fuel vehicles to save money

See "States look to alternative fuel vehicles for efficiencies" from the Washington Post and "Hyattsville cost-saving effort sparks plan for electric cars" from the Gazette.

No, not a solution but a way to reduce gas use.

DC is in an interesting place, because as a city-state (and nation's capital, high visibility) I could see them pulling a CARB and mandating some electric cars. There are what -- one or two dealers in DC? I've said that Tesla may be the best selling new car in the District.

Manufactures would agree because of the possibility of visibility.

And with car2Go, you can have the place and numbers to but in public chargers. Throw some taxis in there (and contra some people, I think a plug in strategy might work for some taxis - they sit around a lot too) and food trucks and you've got a much higher demand for the chargers than anyone else.


Find a way to use those chargers for electic bikes and even more of a winner.

True that this could work in a place like DC. I wrote about food trucks and this once in a comment. DK if it's possible to put in the right kind of infrastructure simply, but it's definitely worth it from a quality of life standpoint. (It's related to my quest since 2003 to get electric outlets installed in treeboxes in commercial districts.)

Good comments as always. Thanks.

agreed it might be much harder than it looks. I know the price for home installation of charger has come down a lot.

The new streeet (I?) at city center has electric outlets in the treeboxes.

For food trucks you'd need the 220 v connections (I think that's what it is). The connections that are equivalent to high capacity fast charging for electric cars.

But like the efforts to build electricity operation of ships when they are in port, it's probably worth it.

Another worthy element to include in the DC sustainability plan...

This is for a port in Sweden, but they do it in the Port of Long Beach and Los Angeles too, I am pretty sure...

If I worked for the city, I could push such an initiative forward. Of course, Pepco would charge a lot (the whole reason that North American bike share moved to solar power is the experience of SmartBike in DC) to set up the infrastructure for hard wired stations.

yeah, that is quite a bit larger than what we are talking about here.

220v would be nice. even 110 would do in a pinch, and would have the option to do other things with the outlet.

There are a number of private companies trying to operate in this space. A lot of garages downtown have done put in chargers as well.


Again, a pretty unique opportunity. Fiat 500e and car2go in california have electric models but basically CA only --not economical rest of country. Not saying that FIAT would WANT to sell the cars here but really is great visibility. Throw in the food truck/UBERS and you've got a very good base.

Autolib is that model too, in Paris. But yeah, Car2Go could try it here.

2. In some of our failed attempts at bikeshare contracting, we did put out the point about integrating infrastructure (car charging) and even working with local utilities to do the e-carshare, along with e-bikeshare in some situations.

Too bad we just didn't have the money and the right timing to really be active in that space.

Portland, Oregon is one of the U.S. leaders in rolling out EV's and EV infrastructure. Lots of EVs on the road. Oregon Electric Vehicle Assn has been active here for quite some time. Drive Oregon is a new organization, with focus on the commercial EV field. Locally, Staples has several all-electric delivery trucks. We have EV charging stations (Levels 1, 2, and 3-DC fast charger) all over town, as part of both the US Dept of Energy's rollout program and the state of Oregon's rollout program. Downtown near Portland State University we have Electric Avenue, one-block of parking reserved for EV charging only, including e-bikes. AAA has added EV-emergency-charging to several of their trucks in the area. Car2Go has a fleet of electric vehicles for rent by the minute/hour.

Alta Planning was selected to create a bike-sharing program that will kick off Spring 2014.

Really interesting stuff. The Electric Avenue project is a great way to create critical mass and visibility. But then so are the other initiatives that you mention. Together they make e-vehicles a lot more visible and viable.

Thank you for these links.

This one is good. Keep up the good work I also visit here: and I get lot of information. Vic Recyclers