There has to be a better way to spend $1.85 billion on "revitalization" just to demolish buildings: The US needs its own version of Germany's International Building Exhibition, let's start with Detroit

Detroit's proposed plan to address vacant properties that make up an increasing percentage of the abandoned city's building stock is to demolish them.  See "Why bankrupt Detroit wants to destroy nearly one-quarter of its houses" from the Christian Science Monitor.

The problem is all that does is create a different problem--lots of empty land that gets stuff dumped on it, has to have the grass cut, etc., an ongoing and expensive maintenance headache.  And all you do is produce empty land which isn't productive. 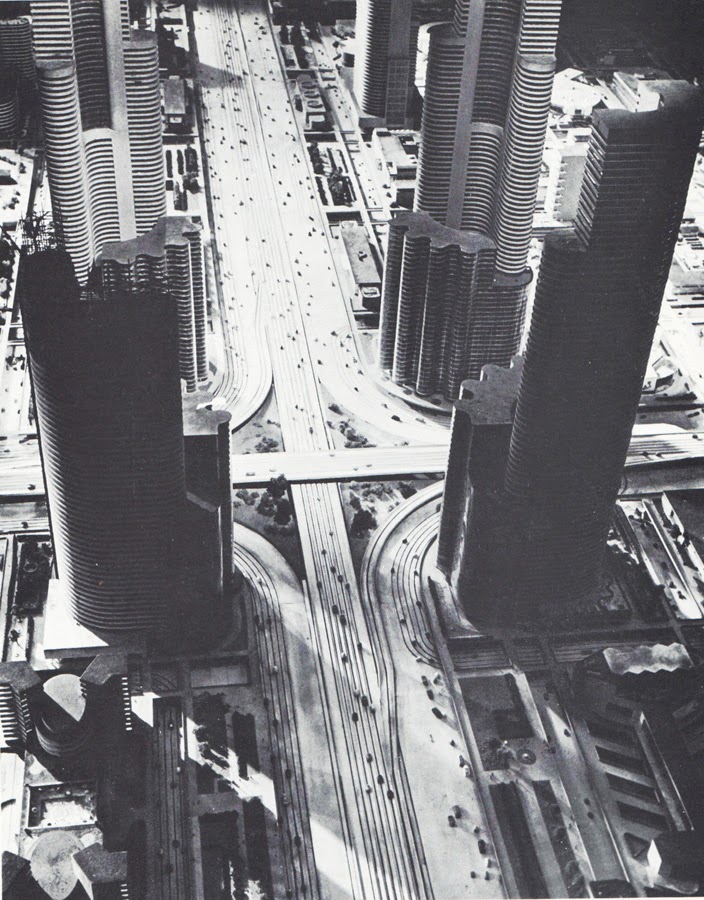 Image from the General Motors Futurama exhibit at the 1939 World's Fair.

I don't know what to recommend exactly. Detroit's problem is residential and commercial abandonment, abetted by deindustrialization but also a concerted policy by the auto industry to move out of Detroit and out of Michigan in order to reduce the power of labor and the UAW within the state.

Detroit is collateral damage, although I also argue that the way Detroit is the end game of what the auto industry expected to have happen to cities, because cities weren't the right built environment for accommodating cars.

Ironically, today the Center for Community Progress announced that the sixth national Reclaiming Vacant Properties Conference will be held next year in Detroit, May 19-21, 2015.

I wrote up the summary piece on European regeneration practices based on the eight cities I wrote about for the Europe in Baltimore project but it hasn't been published yet.

One of the things I suggested is that it would be great for the US to create "an event program" comparable to Germany's IBA/International Building Exhibition (Internationale Bauausstellung).

IBA doesn't happen on a lock step schedule, but is about every 5 to 10 years. The intent of the Expo is to model new techniques for construction and design through the physical transformation of urban sites and districts, thereby repositioning the image and brand of a city.

IBA is focused on what we might call “learning through seeing” and “installations,” accomplished through actively creating and implementing “on-the-ground” projects.  They do a rigorous review of the process and have an extensive publishing program that helps to disseminate the learning.

A city-region is selected based on the level of its problems or questions that it raises and the commitment to address them in a multi-year program that culminates in a variety of physical transformation projects that significantly change the built and natural environment in ways that are truly remarkable--the Emscher Landscape Park project in the Ruhr region of Germany is in its third decade.

The charge for IBA Hamburg was/is to find solutions to three challenges faced by most cities, especially cities located on ports and rivers: the impact of climate change; modifying the urban landscape for new economic circumstances (in the face of limited resources); and social equity.

Imagine transforming US revitalization financing and planning programs to operate as demonstration projects on the massive scale of an BA program, rather than the small scale efforts that are more typical and take decades to achieve critical mass.

Detroit would be a good place to start.

That would be far better than a large scale demolition programs, as Detroit is planning to do ("Blight Cleanup Will Cost a Bankrupt Detroit $850 Million," New York Times) just to end up with empty land.

By contrast, about €2 billion of public and private investment will be spent on IBA Hamburg, on physical improvements to the the communities within the project area over the period of 2006-2020, when the entire forecasted program will have been accomplished--even though the exhibition year of the program was limited to 2013, the time for which a majority of the projects were completed and able to be displayed.

I lived on this Detroit block for a couple years starting when I was 10 years old, when I was in foster care (with a family I was semi-related to). You can buy houses there now for as little as $3,000.

a few years back I traveled extensively in the Ruhr and it really has become a transformed place- there is still industry there- but on a tinier scale than history once had with it- and each locality has dealt with the changes in remarkable ways. It is a beautiful area despite its reputation among Americans for being grimy- which it is NOT at all. Actually it is quite clean and has some nice cities and towns. Tourism has been tapped and it seems to be making for much success.One thing- it is a bicylists heaven. Especially the farther north you go in the Ruhr.

I feel like some form of Buffalo Commons combined with the Redeker Plan is needed.

Step 1. Identify how much city you need for the current residents and draw a line that includes the best parts of the city to get to that point. This would consider ways in which garbage collection, fire fighting, law enforcement, etc... can be most efficient.

Step 2. For people outside that line, rank them by the value of their home.

Step 3. Offer them any abandoned home/property inside the line in exchange for selling their home at 110% of the estimated value, plus free moving.

Step 4. Once everyone has had a chance to choose or pass, offer the homes outside the line acquired in Step 3 to people who live outside the line in the order determined in step 2. Repeat this step until equilibrium is reached.

FWIW, I do agree with you. The city has to marshal its resources, (re) develop critical mass areas and focus its attention and programming where it has the ability to be effective.

So from that standpoint, having this kind of assessment in hand is very important. It lays out what the landscape is and it can't be ignored.

But focus is essential for revitalization. Detroit actually has needed to take a step like this for 15 years and it has been proposed--not the widescale demolition, but the dialing back of city services to a defined core--and met widespread opposition.

wrt your point about "city services", in the 1980s A. Alfred Taubman was quoted as saying Detroit had the opportunity to rebuild, because the infrastructure is in place...

Anyway, once I started getting involved in revitalization in earnest, around 2000, I learned about the Youngstown 2010 "shrinking process," a similar initiative in Niagara Falls, NY (although that mayor wasn't reelected and the process was junked), and of course the Shrinking Cities project in Germany, focused on the newly reintegrated east.

So we can't argue that there haven't been other models out there for Detroit's leaders to have acknowledged and considered wrt the city's situation.

I find this tragic of course, having lived in Detroit off and on until I was 12 years old.

This is a great post.
This post shares information about The US needs its own version of Germany's International Building Exhibition.