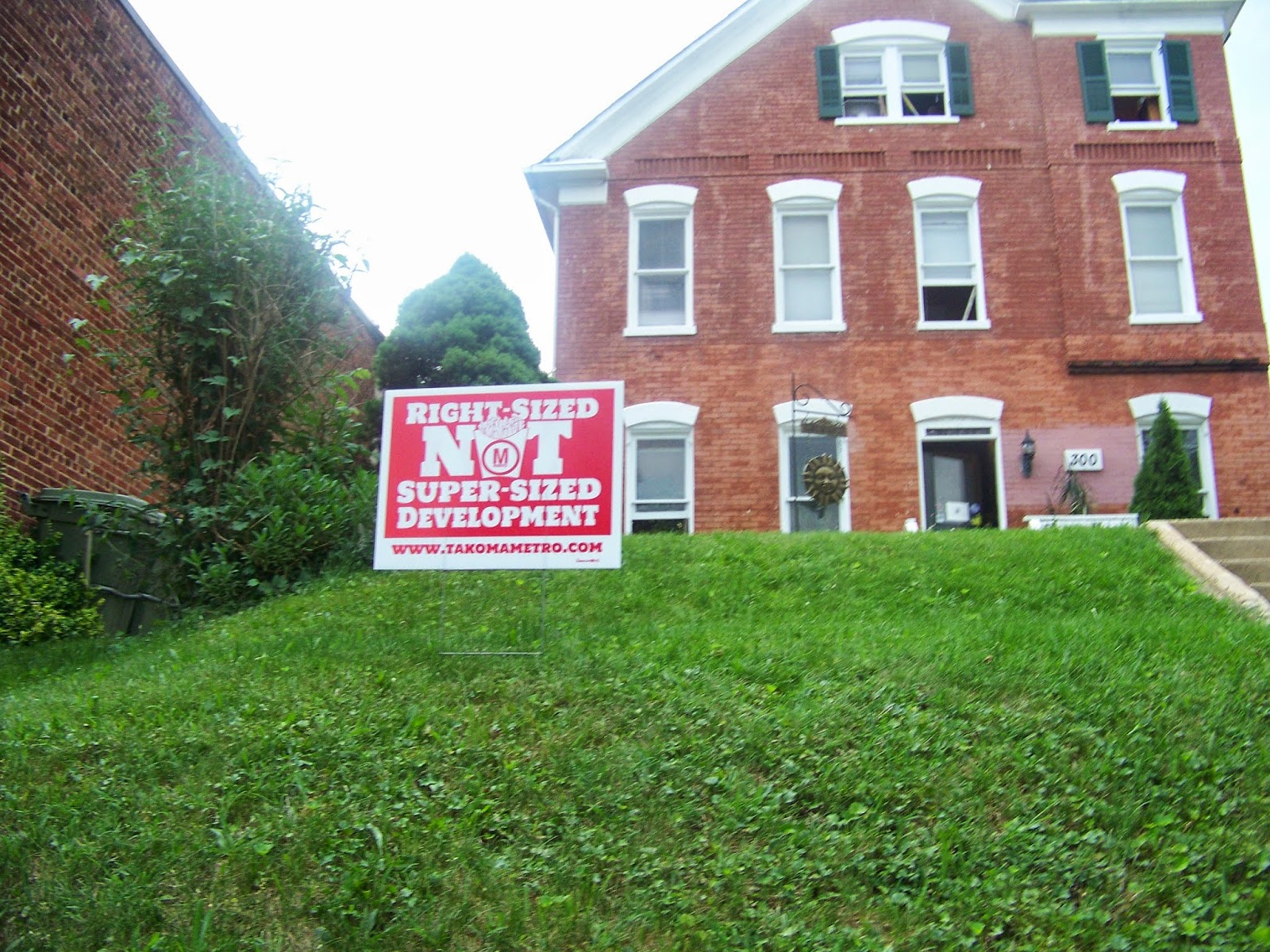 It's also interesting because there is no question that the population that has been added to the area of the Metro in multiunit apartment and condo buildings is contributing to a retail renaissance of the Takoma commercial district (even if some businesses still have issues).

In the last few years, a hardware store opened (about 4 years ago), an affiliate of the Black Restaurant Group, Republic opened (late last year), as well as a great gelato shop (last year), and more including a Busboys and Poets restaurant space is coming.  Plus there are still a soupcon of gift shops and service businesses like dry cleaners, even if they vary greatly in price (e.g., I took two pieces of clothing to be mended and one dry cleaner wanted close to $50 to do it, while the other charged less than $15).

As a resident within walking distance of this area (it's about three-quarters of a mile), it's great.  We were satisfied having a pharmacy (CVS), a couple of restaurants, especially Middle East Kitchen, and some gift shops that we shop at every so often.  All the new stuff is a bonus.

And the Metro project is interesting for me because it has clarified some points about how planners communicate inadequately about planning principles and objectives, and how residents often apply the wrong frames--mostly they act to treat land at a transit station and multiunit buildings the same as their single family house and blocks.

I wrote about some of that here, "Urbanism (and smart growth) as a pejorative."  But I guess my other points have mostly been made in the neighborhood listserv and in some related comments in another blog.

Years ago, I suggested to OP that the Nashville Community Character Manual is a good model or framework that could (should) have been used to frame DC's zoning rewrite. They did consider and research the concept, but ultimately it was rejected, in the belief that it was too radical. 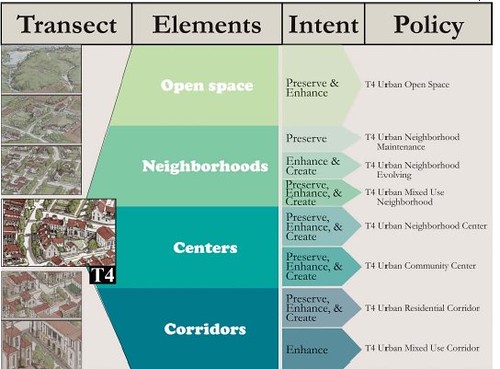 This graphic from the Nashville Community Character Manual is for "transect zone 4" (T4), which is the density scale of my greater neighborhood.  It has 8 sub-zones, and the plan sets "community character priorities" which are set at the neighborhood/block levels and are defined through the "intent" category.  The manual defines three different intents, which can be used in various combinations:
Excepting ADUs, of say 200 blocks in my greater neighborhood, only about 12--at the Metro and in the commercial district--plus 8-10 additional blocks along the railroad tracks that are zoned industrial, are subject to any intensification at all.

The area of the Metro station and commercial district would be defined as a center, and the land along the railroad track a "corridor".

------
Note that Nashville-Davidson County doesn't have high capacity fixed rail transit, which limits the applicability of their process to ours, because transit stations are best complemented by mixed use density, especially in center cities.

There is nothing new about that.  For example, in the early days of streetcar development, it was typical for neighborhood centers, mixed use and higher density, to develop around major streetcar lines--at intersections and along corridors--with a dropping of density as you moved away from the centers and corridors.

Plus, a DC categorization would need an additional corridor zone for railroad corridors.

its always people who do not take or use transit that seem to be the big time complainers all against density around metro stations and being pro parking. I am truly astonished at how many people where I live are dead set against streetcars. yet these same people never take the bus and seldom if ever get on metro. They take cabs before transit- but mostly its about having a parking space for all of their cars.It would be interesting to try to do a survey of car ownership around / in proximity to metro stations. I bet in the affluent hysteric districts you get far more cars and car owner-NIMBYs. Would be worth it to do a survey like this.

I'd agee it is strange in DC that a (small?) majority of single family home owners prefer street parking to a garage.

in the rowhouse neighborhoods probably a majority of blocks can't really accommodate a garage.

In the non-rowhouse blocks, a majority of lots don't have garages.

It is an interesting observation.

In "townhouse" developments in suburban neighborhoods, the kind with front loading garages, all you see is a streetscape dominated by cars. Nobody puts their car in the garage because they fill the garages with crap. Its probably not much different in the city. 2 blocks away from me in Del Ray, a boomer inexplicably parks his Corvette on the street, while he has a detached garage on a corner lot with its own curbcut, and parking pad in front of the garage.

In some of the 1920s and 1930s rowhouse developments in DC, you begin to see rear entry garages incorporated into the house.

This is in Brightwood.

And some instances of detached houses on corner lots that don't have rear access, you see side entry garages--there are two bungalows in my neighborhood with this, one at the end of our block.

There are a couple examples of houses with front entry garages that were clearly built much later, in the 1950s or 1960s, but there aren't many.

In some of the more leafy areas of the city, I think it's called North Portal Estates, abutting Rock Creek Park and Montgomery County, there are a number of examples of front entry garage homes, and there area is decidedly suburban in feel.

The next time I go to Parkway Deli, maybe I'll take some photos

Of course in the 1970s before the historic district laws were in place you had people like Barrett Linde buying rowhouses in Capitol Hill, tearing them down, and rebuilding them with front loading garages.

I think it would be interesting to study the development of garages in DC over time.

yes it would be.

And yes, people do use them as storage (rather than car storage).

And it easier for a lot of people to park on a near-empty street than try and squeeze in a tight garage.

But again why Shoup is wrong; with new developments we should be encouragin underground garages as part of density rather than relying on street parking.

Particulary in DC with the "corridors" and what not. Arlington is the best example here.

Being more granular with parking would also help. I understand the 1970s fear that "outsiders" would come and park near metro stations to commute in, but today's problem is very different.

Thank you again for your flawless service, and I look forward to working with you in the future.click it...: https://www.dosepharmacy.com