As has been discussed here and in traditional media, the Corcoran Gallery of Art will soon be no more.  George Washington University gets the art school and the building.  National Gallery of Art gets a small gallery there and first crack at the art works, and other artworks will be given to other institutions.

Property they own outside of the building, such as in Georgetown, will be sold.  And some sort of nonprofit will be created as well.  It's not clear to me where the revenues from the various property sales will go. 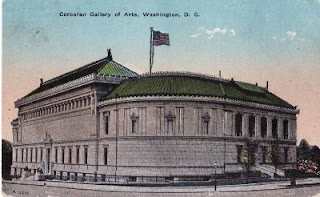 The demise of the Corcoran is interesting, because it is a function of a bunch of interesting problems:

(1) the impact of being a museum that is highly visible because of its DC location, such as when it's display of Mapplethorpe photos was dropped in response to outcry by a Congressman back in 1989;--the exhibit was to be funded in part by a $30,000!!!!!!!!!!!!!!!!!!! grant from the National Endowment of the Arts

(2) its failed attempt to create a new building designed by Frank Gehry; and

(3) the failure of its board to deal with its circumstances and forge a new path, instead of dissolving.

Note that while the San Diego Opera voted to shut down in May, in the span of one week, public and philanthropic response led to a reversal of that decision.  See "San Diego Opera will close, in 'a sign of the times'" from the Los Angeles Times and "San Diego Opera Raises Money to Remain Open" from the New York Times.

Cultural journalist Lee Rosenbaum wrote about arts issues in the Wall Street Journal, the New York Times and elsewhere and now consults and blogs at CultureGirl on the Arts Journal website.  A cy pres petition asks the court to give permission to the organization to deviate from the terms of the bequest that set up the institution.  The petition is supposed to lay out a course of action that preserves the original intent as much as possible.

She argues ("Do You Know the Way to Cy Près? What’s Wrong with Corcoran’s Court Petition") that the Corcoran's cy pres petition does not do this.  The original bequest calls for the building to be used in perpetuity for a public gallery and museum.  It won't be.  She argues that the art school, with tuition pegged at GWU rates, which are amongst the highest in the country, will not serve students well as a result.  And that the art collection won't remain intact even if it will still be in the public sphere, as the collection gets dispersed to local

I expect the Corcoran will argue its economic circumstances were so dire and the real estate and philanthropic markets in DC are similarly unfavorable to its position that this is the only course of action they have.

While other courses of actions were possible, they were beyond the capacity and capability of the board, and maybe the willingness of George Washington University.  I figured that GWU ("damned if you do, damned if you don't: art facility relocation decision") should take on both the school and the museum, given GWU's forays into the creation of a local history museum and taking over the Textile Museum.

But clearly, GWU wasn't keen on taking on such a big responsibility.