Nice quote on the messiness of public participation

There is a nice piece ("California Screaming: The tech industry made the Bay Area rich | Why do so many residents hate it?") in the current issue of the New Yorker about the discontent in San Francisco over the impact of the tech industry influx into the city--both workers as residents commuting to the Silicon Valley, and tech businesses moving away from suburban campuses to inner city locations*--and how this has shaped accelerating price escalation of residential property, the "no fault eviction" of residents of rent controlled units to spur housing turnover and repricing, etc.

San Francisco is a very desirable price to live.  It doesn't have enough housing to accommodate all the people who would like to live there. 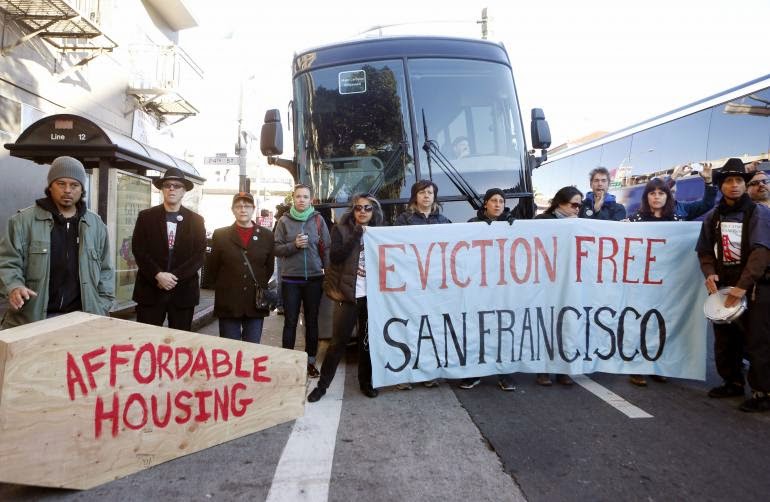 Protesters block a bus full of Apple employees during a protest against rising costs of living in San Francisco, California, December 20, 2013. Reuters/Beck Diefenbach.

So this creates a major dilemma because the way a market economy works, when demand increases and supply doesn't, prices go up.

When demand is stoked by people with extranormal incomes and wealth, prices go up even more (see the past blog entry, "Applying the super-gentrification thesis to San Francisco, Santa Monica, and other cities experiencing hyper-demand").

Rather than call for the construction of new housing, many people are instead protesting the presence of the tech industry. In the long run, I don't see how that can generate the kinds of outcomes that the protesters are seeking.

The author makes a bunch of great points:

With regard to the last point, I have always been struck by how Eric Raymond's paper/book, The Cathedral and the Bazaar, about how open source software development works by creating a community but having structure and leaders, had a lot of insights relevant to community organizing and advocacy.

On the other hand, technology isn't a panacea either, more an enabler, a tool, and it isn't necessarily "revolutionary" (All the talk of e-government, digital government, and open source government is really about employing the design method"), e.g., Uber is a e-taxi hailer, not really any different from a telephone, but they use the hailing device as a reason for challenging the regulatory regime around taxi service ("App based ride services and creative destruction and plain old destruction").

Here are the quotes:

When customization is the norm, discussion--between strangers and opponents--becomes hard.

... The truly radical move in the Bay Area would be a return to the messy business of public debate.

This would be tricky, because public process is antithetical to such culture.  It is not fast.  It is unruly and can be dispiriting.  there are many people involved, with disparate ideas, and most big decisions put to public vote--which means more people and ideas.  This is the hell of regulatory blockades and referenda and open meetings to which crazy people come to read bizarre complaints off rumpled notebook paper.  It is why those hoping for big, swift change... leave government, and why people who worry about weak responses... stand before buses.  Getting anything done through public process requires convincing many, many individuals of the rightness of your dreams.  And it demands that you do that over and over, against a tide of disagreement, settling for half measures rather than no measures.  The terms of public process are not personal or romantic but objective, it is language that could have been drawn up, literally, by community.

And yet, because of that, it is a language shared.  "Democracy" and "freedom" aren't synonyms.  Getting from the self-improving pluribus to the self-soveerign unum is an awkward project, and its only hope is a close mooring of language to process.  Are we still on the same page?  Do you follow? we ask at every turn always aware that the answer could be no.

(* Something I suggested a couple years ago as a way to resuscitate the parts of Market Street and South of Market that are pretty gnarly and desolate.  Then it didn't appear to be happening, now it is accelerating.)

Someone (EE?) posted a link to an interesting video the other day on this subject and how the "new economy" was just built on the "old economy".

Likewise, the "new economy" really only works when you have tons of free money and the ability to monopolize profits.

See Uber, wtih 500M in funding and a round of price cuts. they are reporting Uber now loses money on every ride.

Going back to the Bay area, which am I not an expert on, the immediate problem is cheap wealth, and that there is a subsector of the economy that can afford to pay 1M in cash for a house and get financing later.

No amount of housing supply can do anything about that.

In the longer term, yes, I agree, the Bay area for a variety of reasons is highly restrictive in terms of building. However, those restrictions are precisely what make the area appealing.

Going back to the video, or cathedral building, what we need as a public entity is a longer term vision. Or rather a larger time frame. If you are building a city for 100 years in the future don't be tempted to throw up cheap housing now. Find a way to build parks. Invest in transport.

If fact, I'd say that is the heart of the bay area -- taking advantage of the "booms" in order to invest for the future.

You'll notice that DC does not follow that logic.

in the article there is some discussion of your point. Tom Perkins is quoted discussing how the investment in tech now is driven by low interest rates and other tax regulations etc. and that when interest rates go up, money will move into other areas, seeking better returns.

2. the point about investment is key.

i went on a tour of a project in San Diego yesterday which I will write about later in the week.

The well funded philanthropy that is actively pushing the revitalization program there has been working there for 20 years, has no intention of leaving, and has patient capital (Price Family), but also a real commitment to social and civic infrastructure as a fundamental element of the initiative.

re; old capital funding new economy ... the auto industry came to be a star in Michigan for two reasons. (1) wood industry (which is why Grand Rapids did furniture for a long time) and the capital amassed by the forest owners, who were looking for other places to invest, (2) including in carriage manufacturers (Durant's partner was Dallas Dort, who made carriages) who had some (note "some") of the manufacturing and experience know how necessary for cars (the engine was the other key element).

The Mellons, Rockefellers, and the Duponts are also good examples of moving from one sector to another as circumstances and capital enabled.