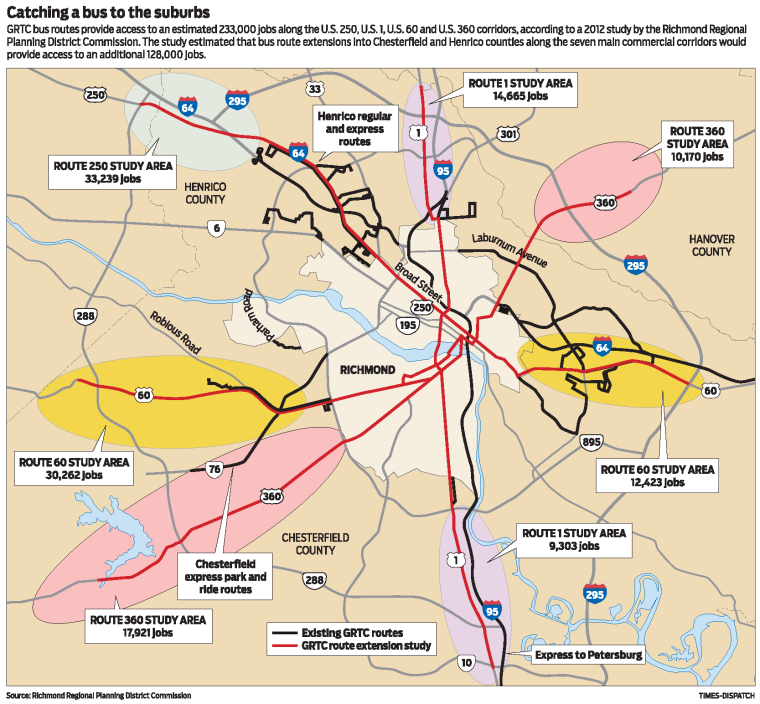 Given that this weekend marks the opening of the Silver Line Metrorail expansion in Fairfax County, Virginia, it's appropo that today's Richmond Times-Dispatch has a long article, "Without dialogue, bus expansion stalls," about how the transit system in the metropolitan area mostly serves Richmond (population about 210,000), and that this is a long term problem because most of the jobs growth is in the suburbs.

In the vein of the post from Urbanophile, "Are States an Anachronism?," the State of Virginia has some complicated politics, which make it difficult for cities and counties to work together.

In Virginia, cities are legally separate from counties, and it's a "Dillon Rule" state besides, which means that localities can only do what the Legislature authorizes.

That cities and counties are separate means that there is limited means for tax revenue sharing at the county/sub-county level, creating a zero sum game situation, where jurisdictions are incentivized to poach businesses from each other. 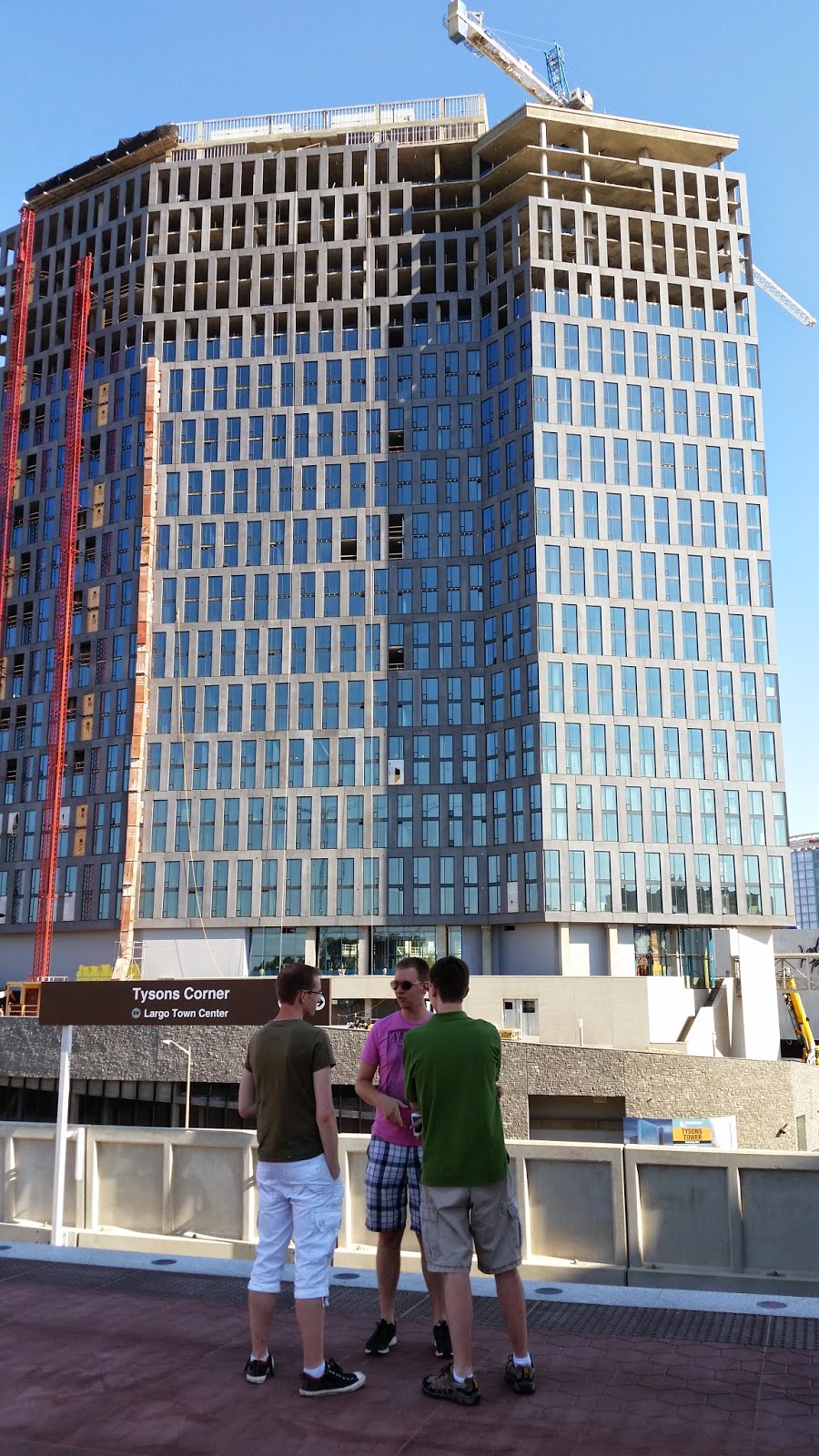 Virginia organizes transportation planning through planning districts, and the two largest jurisdictions, Northern Virignia (about 2.8 million residents) and Hampton Roads (about 1.7 million residents) are not only larger than Greater Richmond, they have a preponderance of federal facilities, which has helped to bring fixed rail transit to each area, especially because federal installations are a large source of jobs and destination for employees, focusing transportation demand in a manner supportive of mass transit, assisted by the availability of the federal transit benefit (which is now up to $130/month and is a significant source of revenue for WMATA in the Washington area).

Although the Richmond Metropolitan Authority, a cross-jurisdictional infrastructure corporation, builds freeways and other projects, in terms of transit, Greater Richmond area has political differences comparable to those of Atlanta, where Fulton and DeKalb Counties have funded the MARTA transit system for more than 40 years, while Clayton County has not, although they will be voting (again) in November on whether or not to participate going forward ("MARTA expansion to go before Clayton voters," Atlanta Journal-Constitution).

Richmond, the state capitol, has only bus transit, as well as Amtrak service.  While extremely long term rail transportation planning by Virginia's Department of Rail and Public Transportation puts forward the concept of extending Amtrak's Northeast Corridor service to Richmond as the southernmost node in the system (see "Dual powered diesel-electric locomotive introduced into service at NJ Transit and implications for long range regional railroad planning in DC, Maryland, and Virginia"), the region is focused on automobility. 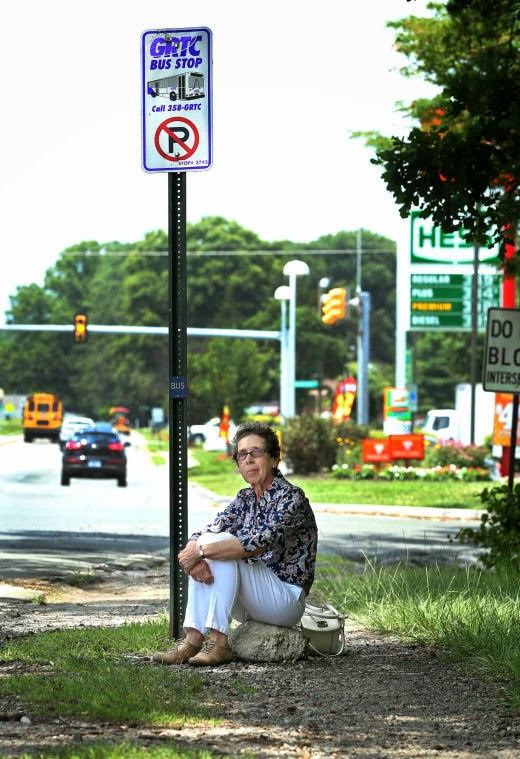 A rock serves as a bench at a bus stop in Henrico County, Virginia.  Richmond Times-Dispatch photo.

Competitive disadvantage: Richmond has great assets but limited transit.  Despite incredible architectural and cultural assets and some of the state's most interesting neighborhoods and commercial districts, and a fast growing university in Virginia Commonwealth University, perhaps Richmond's ultimate success as a place to locate business and to attract and retain talent is hindered by its automobile-centric mobility paradigm, and in terms of intra-state competition for new businesses, it is a less attractive location compared to Northern Virginia especially but the Hampton Roads as well as in how the Tide light rail system is expected to expand from Norfolk to Virginia Beach, and Virginia Beach looks to attract a professional basketball team to raise its profile.

Without high quality transit, it's difficult for center cities to begin re-attracting residents.  And experts seem to believe that millennials are more interested in smartphones and less in automobiles, so high quality transit increasingly seen as a competitive differentiator between metropolitan areas ("Millennials prefer cities with good public transit," USA Today).


More than half (54%) of Millennials surveyed say they would consider moving to another city if it had more and better options for getting around, and 66% say that access to high quality transportation is one of the top three criteria they would weight when deciding where to live.

Lessons from elsewhere.  Richmond could learn from Hampton Roads (good and bad lessons) but especially from other places such as Tucson, Arizona (Citizens for a Sensible Transportation Solution) and Hillsborough and Pinellas Counties in Florida ("What Pinellas can learn from Hillsborough's failed 2010 transit referendum," Tampa Bay Business Journal) in how citizen and business interests can push transit development and expansion forward in transformational ways, or not.  The lesson from Tampa Bay that we'll learn from this November's election is whether or not it makes a difference in voting results by making benefits clear and having not just a vision but a plan. 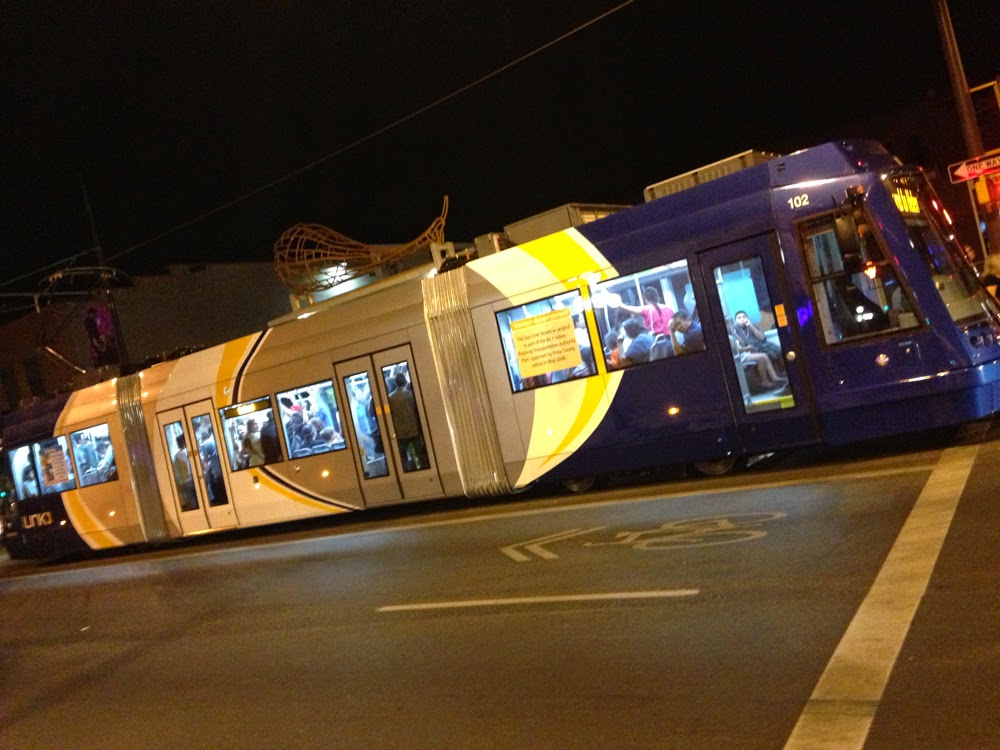 A full streetcar Saturday night in Tucson.  While ridership was augmented because service is free, high usage is likely in Tucson and other places with tight connections between activity centers.

In Tucson, results are demonstrated in Friday's launch of streetcar service, after an initial referendum failed in 2003 but a second passed in 2006 (Image from "Free ride: 40k hop on Sun Link in first days of streetcar," Tucson Sentinel).

Tucson is a rare instance of a fixed rail transit projectd being initiated by a group of motivated citizens.  Usually business interests are the most prominent backers of transit projects. 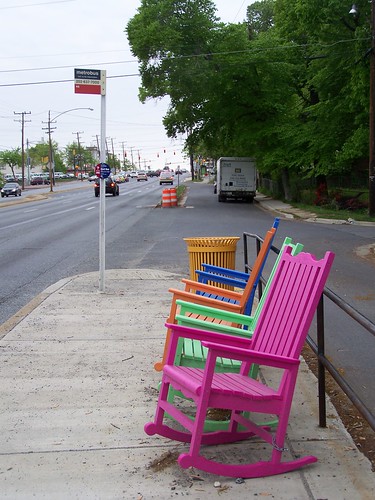 Richmond needs a similar kind of initiative to move its transit game forward.

One way to start might be with tactical-guerrilla urbanism actions focused on improving bus stops.

These chairs were installed by the City of Takoma Park, Maryland, as part of their New Hampshire Avenue improvement initiative.