Universities as elements of urban/downtown revitalization: the Portland State story and more 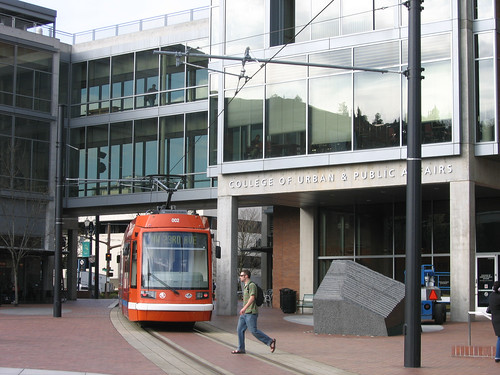 The Portland Streetcar passes through the plaza in front of Portland State University's College of Urban and Public Affairs.  Image from Rethink College Park.

This article, "Nohad Toulan: The University in the City" from the PSU Institute of Metropolitan Studies magazine, Metroplex, is a particularly good read on the development of Portland State University's College of Urban and Public Affairs, the university's refocusing on an urban agenda, and the development of the college and the university as a connected and integral part of the city's center.

It's amazing to me that we don't have a stellar urban studies academic program at any of the universities based in DC.

2.  Arizona State University, which is based in the Phoenix suburb of Tempe, has a growing center city campus.  See "ASU law school construction in downtown Phoenix continues" from the Arizona Republic.

3.  The University of Arizona has actively supported the development of a streetcar system in Tucson.  Brochure

4. Drexel University is increasingly involved in the revitalization of the area around its campus, which is in the vicinity of Amtrak's 30th Street Station in Philadelphia, with whom they are partnering.  See "Drexel's new president outlines plan to revitalize neighborhood" from the Philadelphia Inquirer.  They have expanded their efforts into nearby lower income neighborhoods, which were recently awarded a "Promise Neighborhood" designation by HUD ("Drexel Plays Key Role in Education Efforts," press release).

The President, John Fry, had previously done similar initiatives when he was at the University of Pennsylvania and Franklin & Marshall College in Lancaster, PA.

6.  I mentioned that Catholic University has moved their college bookstore to the new retail district on Monroe Street NE, from within the campus.  This means that they will be sharing their bookstore with the community, which has been without a bookstore for many years.

7.  While there are a variety of complaints about funding, etc., I think that the City of Chicago's initiative to move the DePaul University basketball arena to a center city location is an interesting venture also, with the aim of increasing visibility and cross-promotion of Downtown to game attendees.

It is interesting, because between 965 Flordia, the bread factory, Refrigerator space, Fire station, some dorms, and two public housing projects Howard could really make a huge difference. That has to be largest space in the District.

HU has suffered the same problem as the DC Government in terms of vision. They were hot to trot on the Howard Town Center project, but they haven't been transformative like they could be.

There are other buildings along Georgia Ave. that they control that could be great anchors/building blocks.

OTOH, they did put their bookstore on Georgia Ave. and they tried to do a hotel there, but it wasn't successful.

And working with Fannie Mae Foundation, eventually, after assisting the rot of Le Droit Park, they began to help improve it with a vast rehabilitation and construction program.

But they need better real estate people, but people focused on building community not just buildings, like the president of Drexel. Speaking of that Brookings press conference, someone like, , but he won't leave his big project.

2. But the new president of HU appears to be particularly impressive.

And HU's campus interior is quite attractive, and the way that 4th St. NW is developing into a dorm. districct on the edge could be quite good. (I think the street should be repaved in Belgian block...

DC's elected and appointed officials haven't stepped in to help the U up its game. E.g. other U examples would be Square 54 at GWU (where the Whole Foods is) or what CUA forged for Monroe Street NE in Brookland on what they used to call "South Campus."

sorry, left out the name, Kofi Bonner, he has a pretty good track record. He'd be great, but HU would be too small for him:

Hansel Baumann at Gallaudet is another example of a campus master planner with vision.

DK if Howard U is part of the university land use community practice group at Lincoln Land Institute. It should be.

Well, eyeballing it -- and included the highly underused cardoza "campus" I'd say there are 50 acres of Howard, City, and empty land there.

With good chunks of it empty, public housing, or recreation fields.

And I'm not including the Howard Service Center.

rec fields, but otherwise, yep, a lot of land that can be better used and if done right, transformative.