Transit stuff #1: Light rail in Portland has issues too 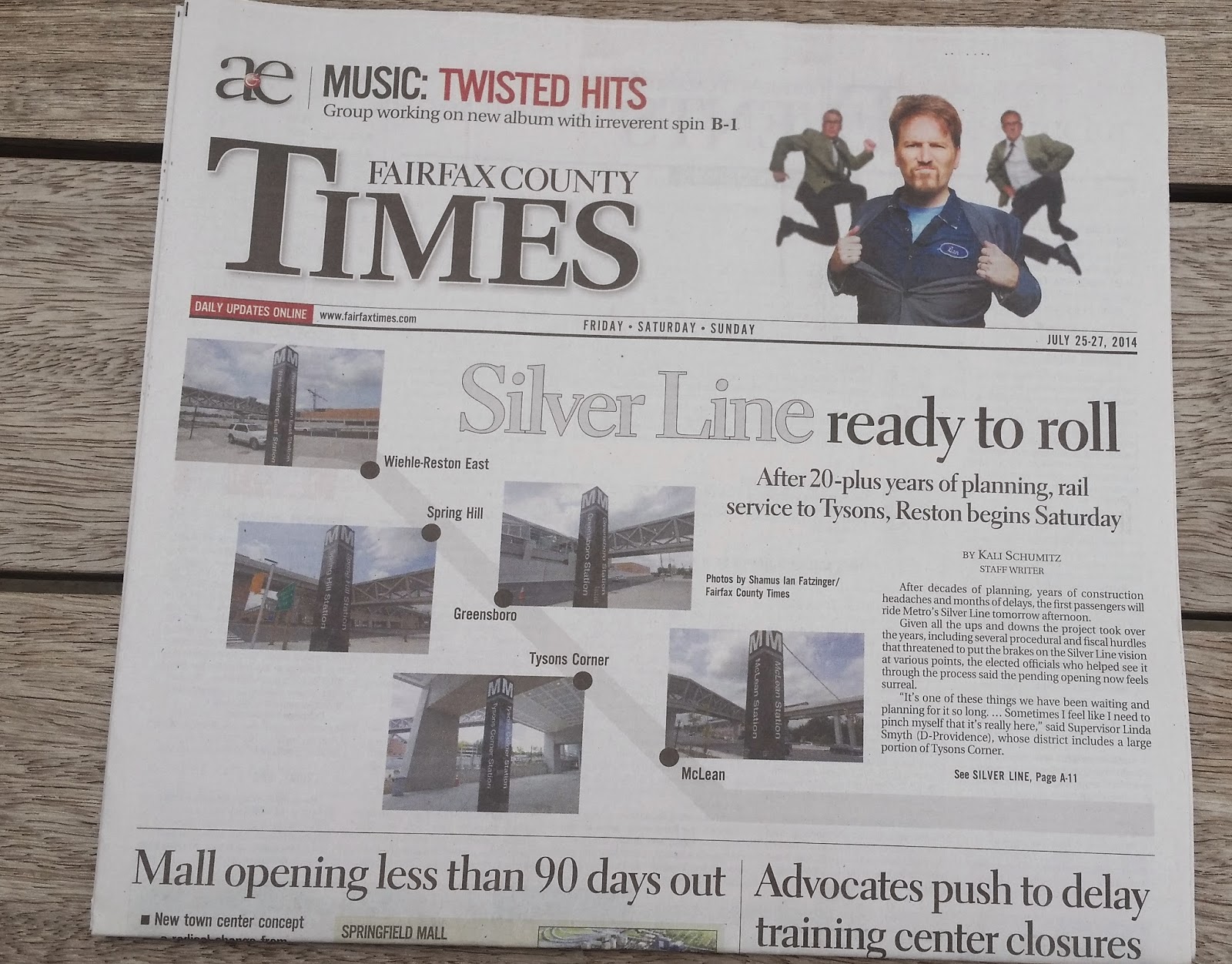 I have been meaning to write about the opening of the Silver Line heavy rail system in Northern Virginia and the streetcar in Tucson, as well as separately, the success of a bus millage in suburban Detroit, and the failure of the creation of a transportation tax district in Kansas City and the Missouri "transportation" sales tax, and San Antonio's halting of streetcar creation activities.

Still there are a couple of other interesting developments in the transit arena that are worth reading, considering.

The Austin American-Statesman has a very long piece about light rail in Portland, Oregon ("Portland light rail's mixed track record" and how it isn't smooth sailing in terms of funding issues as well as resistance to expansion on the part of often conservative suburban counties.

In a separate email discussion, I made the point that the DC region has similar issues, and even DC.  This is what I wrote:

We have those same issues in the DC region. I think it's insane, some of the anti-rail opposition to the Purple Line especially (but also to streetcars in Northern Virginia) as it is not like the DC area lacks experience with the success of transit. In fact we have scads of sucessful examples, especially in DC.

The reason that much of the core of the city is successful now is because of the concentration of 31 Metro stations--even though the system was designed for suburbanites, at the core it works monocentrically for the benefit of the city itself.

But what really saddens me is that we have the same kinds of political dynamics within the city as well ("DC as a suburban agenda dominated city"), both in terms of progressives expressing anti-rail attitudes toward streetcars (although now I am less enamored of streetcars, though still supportive, because I think we should focus on intra-city heavy rail expansion) and the outer city (the parts outside of Wards 1, 2, and 6--the original L'Enfant City is comprised mostly of Wards 2 and 6) which is dominated by much more suburban attitudes toward mobility and automobile primacy vs. the inner city or core city of Washington, where walking, biking, transit, car sharing, density and relatively short distances between home and work make getting around a car practical and efficient..

Anyway, it happens I am preparing a piece on these issues, in response to a recent BBC piece on DC's revivification ("Washington DC from murder capital to boomtown"), because unfortunately that article ascribes most of the success to an influx of population starting in the late 1990s, and misses the point that the foundation of DC's success is built on the period from the 1960s to the mid 1990s, when people with choices were still attracted to urban living because of:

1. historic building stock in the city's neighborhoods in and around the city's core
2. (for the US) a deep transit infrastructure which allows people, at least in the core, to get around without having to rely on owning an automobile
3. the steady employment and contracting engine of the federal government
4. and the concentration of federal employment centers in DC's core and/or proximate to transit.

At least with regard to streetcars in DC, I am hoping, once the system starts operating for real, no later than the first quarter of 2015, that some of the opposition within the city will start to wane.

you are correct about the BBC article not revealing all of the points of why DC eventually succeeded. The metro system was a gigantic and probably the main factor. As for the federal government- a lot of fed jobs were lost at this time to the suburbs and other areas - as they continue to leave to this day. I place less stock in the feds than you do- but they remain important certainly. We are also seeing a huge upswing in international investment in the city- in the commercial buildings- and DC is supposedly one of the top 5 cities in the USA for this investment - which continues on as well. The SW waterfront is a Canadian venture- as the City Center project was Quatar investments.
These factors are usually ignored in these articles which always simplify things. DC is more than just a one horse city. There are more complex things going on here than meets the eyes..

well, we disagree on the future. I think that the economy is still pretty dependent on the federal govt., which because of the antigovt. strain of the Republicans, is slowing down its spending and hiring, and the military is shrinking. It's very political, e.g., how the Republicans won't fund the rehabilitation of the CFSB building, because they are against regulation of the financial sector. It's but one illustration of the impact on DC's real estate market. Of course, Dept. of Homeland Security "not" relocating to St. E's west campus is another...

Also, as pointed out in a big Washingto Post series a few years ago, a good deal of the run up in the local economy in the 2000s was the result of anti-terrorism spending, on firms, software development, etc.

Given the consolidation fervor in all business sectors, at the same time business is consolidating (mergin) and so the private sector is shrinking too.

E.g., no such thing as MCI/Worldcom anymore, no Hechts as a successful independent firm, Bell Atlantic merged with NYNEX renamed itself and relocated to New York, AOL is pretty much nothing compared to what it was, no PSINet, etc.

It's not a good time for that to be happening, coincident with the decline in federal spending.

The real estate market, compared to worse off economies overseas will still be a good place for big firms to park money. But I don't know how much of a growth element it will be.

And I am concerned at how much inmigration will continue to occur, which is the source of demand for apartmeents, which is a major element of what's currently being built in the real estate sector.

This article from WBJ is another take on the local commercial real estate market.

There is a bunch of good stuff about how the 20-25 age group is now the largest in the country, and that is why rental apartmetns have boomed.

Going forward on a national scale, it is likekly they will move on to something else.

In terms of DC, as I have said before, we have overbuilt 1BR units and rentals. I think DC can continue to capture a larger share of the youth market in the region, but that market may be shrinking.

I see a lot of baby strollers, not many children.

well, it's partly where you live. In the inner core I think you're less likely to see children age.

In neighborhoods like Capitol Hill (especially in walking-biking routes to schools like Peabody, Brookland, and increasingly, my neighborhood, you see older kids, or kids that grow up from youth.

There is turn over though. E.g., one family was turned out by the property owner (oddly, since the house has been empty for a year) and 2 other kids have gone off to Morocco for two years with their parents.

But on the back side of our block a household that since here has had two kids over six years (they moved in just before us, we looked at the house they bought but we didn't like it) and they are "moving", less than one block away, but to a much bigger house.

People are moving in either expecting to make children, making children, or already with some and they are staying for the long haul, especially given the charter school option.