National Library Week, sponsored by the American Library Association, gives us an excuse to consider the role of the library in the community in a more rigorous way than we might otherwise do.
-- press release

The belief that digitalization means that the library is dead has been proven wrong decidedly. 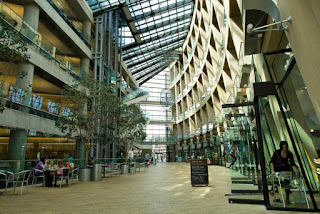 The Salt Lake City Central Library is perhaps my favorite library outside of big university libraries or the Library of Congress, incorporating exhibit and gallery space, a green roof open to the public, and with a library store, gallery, cafes, and community space on the ground floor, complemented by an auditorium, meeting facilities, a separate children's library, and an arcade.  An outbuilding connected to the library includes the local NPR station and the community writing center sponsored by the community college system. Photo: Brian Grimmett, "Salt Lake City Library Asks For Property Tax Increase," KUER-FM/NPR.

The reality is that libraries, being the civic asset open to all, have always been more than repositories for books or other printed matter--although printed matter remains important--they are civic and cultural centers.  According to the ALA, that is the case:


According to The State of America’s Libraries Report ... academic, public and school libraries are experiencing a shift in how they are perceived by their communities and society. No longer just places for books, libraries of all types are viewed as anchors, centers for academic life and research and cherished spaces.

This is true at many different scales:

This is particularly relevant as DC embarks on rebuilding and expanding its central library.  While I believe that a library improved only minimally will still be a benefit, the opportunity to fully rethink the central library as the city's primary civic and cultural asset is likely to be missed and this opportunity won't come around again for two to three generations.

And there is a gap in "library planning," as most libraries don't take a broader cultural planning approach when developing and executing their program, including in how libraries are designed and constructed.

I've discussed some of these ideas here:

The basic idea is that "local DC" lacks a preeminent cultural facility that serves local functions as opposed to the "nationally-serving" cultural facilities in the city such as the Kennedy Center, the Library of Congress, Smithsonian Museums, etc. and that an expanded Central Library could fill that role in part, by acknowledging the need and adding the required facilities--auditorium and cinema, exhibit and gallery space, etc.--and creating congruent programming.

But at the same time, the various roles of the library should be defined more directly and strengthened through co-location of related programs and initiatives, and the development of new programs.

The central library's knowledge, information, and media role can be expanded by synergistically co-locating related projects and organizations--which could be nonprofits such as the Foundation Center Library or Provisions Library, WPFW-FM, etc., as well as for profit publishers and media organizations.  Why not incorporate a news-stand into the ground floor facade, or include a bookstore 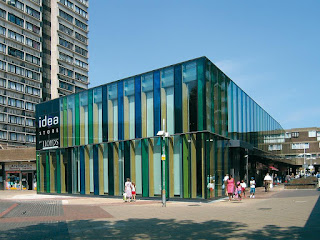 Programs could be developed to support literacy and lifelong learning (once called "adult education"--models include the Idea Store program in Tower Hamlets borough, London, which merged and expanded library and adult learning functions in new spaces located in activity centers (shopping districts) and the Discovery Centres in the UK Hampshire district.  This year the Idea Store offers over 900 lifelong learning courses.

The civic role could be developed by putting at "the library" government functions that are externally focused, such as the Serve DC volunteerism program and the city unit that assists nonprofit organizations in landing grants.

If the city had an independent "Dept. of Neighborhoods" like Seattle (such functions currently reside in the Mayor's office and the offices of the individual councilmembers) it could be located at the Central Library, it could be located here, with a training and capacity development program open to ANC Commissioners and members of civic organizations.  A conference center could support public programming and provide space at low cost for civic groups, etc.

Some interesting resources on libraries include:

probably the best to hope for for DC's nasty ass MLK library is to just burn the books and turn the thing into a giant full service homeless shelter. Since the rich people in MoCo and FrFx counties will not accept and of the burden of the homeless population we may as well make the best of it. In any case those who need to assuage their guilt can come in on metro to the new shelter- easily accessible by subway- and volunteer to help. Its perfect. God that MLK thing is ugly. what were those pople thinking when they allowed that monster to be built back in the 70's ??

If I had a billion dollars, fixing up the DC library to be more like the 42nd st library would be on my list. I don't know how many books have been written there, and there are enough writers in DC that it would be productive.

Granted, we have the LOC of that...

the inability to admit the problem with the MLK library is homeless is staggering. The Arlington Central library has some of the same issues -- bathrooms becoming covered in shit for instance - thanks to them.

Ah, to bring back anti-loitering laws...

Because I mostly use the LOC, I only use MLK occasionally, usually the Washingtoniana and I don't really see the impact of the homeless, except in the front of the building, which granted, if left unchanged would make it hard to "activate" the front space with cafe, Bryant Park-like "reading rooms", a newsstand, etc.

That's a keeper, thank you. It's interesting because those of us without pre-late 1970s experience with NYC don't know that before the park's decline in the 1960s and 1970s that it was great.