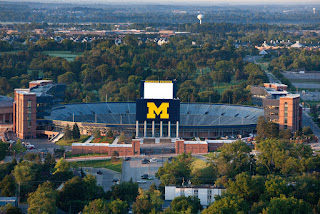 The impact of college sports, primarily football and basketball, can be quite powerful on local economies, because most of the schools aren't located in center cities.

Yes, I went to UM.  But seeing people get into fights after the football team lost turned me off big time sports more generally--so I don't go to games and watch sports on television almost never.

That being said, being an alum I'd rather the team win than lose, and I admit to being favorable towards U of Maryland's move to the Big 10 conference mostly because that means that the many Michigan alumni living in the DC area can see the various Michigan sports teams play locally, even if I am not personally interested.

Interestingly, the analysis also included large college football and basketball teams as part of the study.

This makes sense given the increasingly number of examples of college stadiums getting local public financing (the City of Chicago is financing the creation of an arena for DePaul University's basketball team and relocating the facility to the convention district, the Baylor football stadium was located in Downtown Waco and did receive almost 1/4 of its construction funding from the city), selling naming rights for stadiums, etc.

My only criticism of the study was that major college teams are likely to draw out-of-area attendees, unlike most professional sports teams and therefore the economic capacity to support college teams is a little different as they draw attendees beyond the boundaries of the metropolitan economy, which was the economic unit of analysis for the ACBJ study. 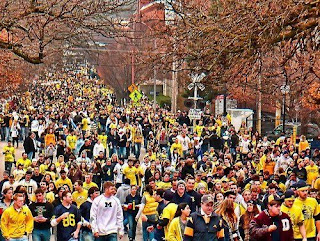 Those games, in the instance of 2013, came against Central Michigan, Notre Dame, Akron, Minnesota, Indiana, Nebraska and Ohio State and drew 781,144 fans to Michigan Stadium.

The study by AEG concluded that those weekends combined to attract 632,853 visitors from outside the Ann Arbor area. That number includes those visiting but not attending the game, as well as ticketholders.

Perhaps the most surprising aspect of the study was the number of fans attending from outside the Ann Arbor area. AEG geocoded season ticket and single-game ticket sales by ZIP codes to determine that an estimated 87.3 percent of ticketholders come from outside Washtenaw County's roughly 350,000 residents.

According to AAACVB president Mary Kerr, previous estimates of that number were about 60 percent.

"That was significantly higher than we thought were coming from outside the area," Kerr said.

Winning makes a big difference.  The data in the study from the MLive report is from 2013, and in 2013 and 2014, the football team wasn't particularly successful. 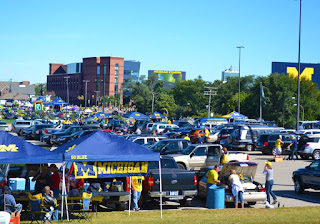 Earlier this week the Washington Post reported ("The Harbaugh effect: A Big Blue boom, all the way down to the parking lots") that the Ann Arbor Public School system, which rents parking spaces during games at the high school across the street from the stadium, finds that revenue is significantly greater this year already, compared to last year's losing season.  From the article:

“Isn’t that amazing, how one person can make that much difference?” Judy Solowczuk said.

Spending by nonresidents, not providing public financing for stadiums.  College sports may be a rare example, when the localities don't pay much towards a stadium or public safety management on the day of a game (which is unlikely) and so there can be considerable local financial benefit with little cost (except for places like Waco and Chicago).

Besides not "having" to provide funding for stadiums and arenas, the difference comes down to capture of spending from non-residents.  Most research on the economic impact of sports expenditures finds that it doesn't add new spending, but merely substitutes for other spending, because attendees are local

Professor Tim Chapin and the Political Economy of Sports Team Facilities.  A couple weeks ago, I happened to have an e-conversation with Neil deMause, co-author of the book Field of Schemes, and webmaster of the companion website, about some of these questions, and he pointed me to the work of Tim Chapin, a professor at Florida State University.

I hate to admit I wasn't familiar with Chapin's work, which looks at stadium development over long periods of time and the writings of geographers to drill down more deeply to consider the factors that yield more economic return to localities from certain types of facilities.

based on what I remember from college football games, theoretically it seems like a bad idea. BUT, the price is so high, it's not like college students would be buying.

Then again, like described in the article, probably a lot of people focus on getting drunk cheap before the game.

... but you do see the point of the big teams. A majority of the patrons are older adults, not college students, and they have different expectations of how they should be able to consume the event.

there are calls for him to resign too.

I get the Sac. Bee e-letter and a few years ago, when these allegations came up, Michelle Rhee stepped in to try to quash them, saying they'd affect the great work of his charter school.

You're a lawyer... I can't imagine someone would give a settlement if there weren't grounds. I haven't looked at the interview with the woman from Phoenix (hey, I don't care that much about this).

I don't typically watch ESPN, but these documentaries sound interesting, and I'd like to see this one... it premiered in a theater in Sacramento within the past few days.

... maybe I should be more satisfied with DC...

That's why I harp on fiscal sponsor agreements and (c)(3) incredibly easy to use them to hide donors and spending.

A little different, but it's worth mentioning that when small or atypical colleges and universities manage to be selected and win a few games in the NCAA Mens Basketball Tournament, it has a longer term impact on admissions.

"Coach K: Saint Peter's Cinderella run will translate to 'tens of millions' of dollars for the N.J. school"

This is certainly the case in the past for schools like UMBC, George Mason University, VCU, University of Richmond.

"The Flutie Effect: How UMBC Can Benefit From a Historic NCAA Tournament Upset"

"In the aftermath, applications to Boston College increased by about 30% for two years. Alumni engagement and apparel sales also improved. While there are obviously many non-sports reasons for Boston College’s success over the years, the school is now ranked by U.S. News and World Report as the 32nd-best national university in the United States.

The Flutie Effect could alternatively be called The Ewing Effect (as opposed to The Ewing Theory). Between 1983 and ’86, applications to Georgetown University increased by 45%. The dominance of the men’s basketball team during this time period is regarded as a key factor. Patrick Ewing leading the Hoyas to a national title in 1984 highlighted what is known as the golden age of Hoya hoops. The institutional benefits would last for decades: Georgetown has become extremely selective in admissions and is now rankedby U.S. World and Report as the 20th-best national university in the U.S. There are, of course, many other factors for Georgetown becoming as selective as an Ivy League school. Still, the popularity of the Hoyas gave the institution new attention and a powerful recruiting tool with high school students."


I'm not so sure about American University and George Washington University in the early 2000s.

I don't think the ability to be a wild card occurs in football so much, because it's not possible for wild card teams to participate. The barriers to entry are so high.

But success in football does contribute to higher college application numbers.