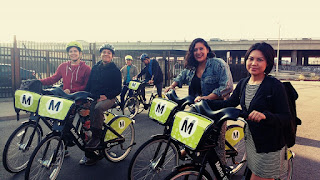 The county transit agency is the operator of the system, which makes it easier to have one system throughout the county (although some communities have already launched separate programs because they were impatient).

1.  LA Metro is the prime sponsor of CicLAvia, the nation's most successful "open streets" program, which typically gets 100,000 to 125,000 participants in their street closure programs, held in the Spring and Fall each year. The program rotates to different locations around Los Angeles County. 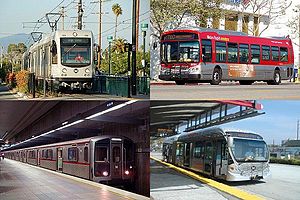 2.  LA MTA typically include bike paths with new transit lines.  A bike path parallels the Orange Line BRT and one is being built along the Expo Line as well.

3.  Besides bike racks and bike lockers, LA Metro is rolling out "bike hubs" to stations with high demand for bike use.  The first of five hubs opened at El Monte last September.  Obviously, they are not the first transit agency to do so, but it is part of an integrated approach.

What does distinguish the LA bike hubs from many others is besides having a repair stand and air pump, bike repair services are available, along with classes and other events, and there are staff on-site at certain times of day.

The next step would be to graduate to an County-wide integrated secure bike parking system like the Parkiteer program in Victoria, Australia.

For example, another BikeHub has been opened by the operators at the Covina Metrolink railroad station, but separate membership is required.

4.  LA Metro launches bicycle share in Central Los Angeles (which is a different system from other new bicycle sharing programs in West LA, including Santa Monica), with 65 stations and 1,000 bicycles.  The system will be expanded to other County communities in 2017.

By contrast, in the LA program, paying the $40 annual fee still results in a per trip charge of $1.75.

To get "free" trips on the LA system, you have to buy a monthly pass.  It's $20 per month, $240 for the year.  That's more than double the cost of an annual membership compared to most peer systems. (The NYC Citibike membership costs $15/month or $155/year, for unlimited trips of 45 minutes or less.  The San Diego Decobike program charges $125/year for an annual membership, with free rides of 30 minutes, or $199 for a membership with free rides up to 60 minutes.  But on a monthly charge basis, the cost is $240 or $360 respectively.)

5.  The bikes are clearly branded using the LA Metro logo.  It's very direct and ties the program to the transit agency clearly.  By contrast other bike sharing systems when operated by local government tend to brand the name of the system prominently with smaller and subsidiary identification for the local jurisdictions pretty impressive.

Of course, such direct branding comes at a cost of not selling outside sponsorship, such as how NYC's bicycle sharing program is sponsored by Citibank, although this allowed NYC to put very little money into the program.

On the other hand the Metro bicycle sharing program in LA is an example of how a transit agency's brand, e.g., in DC Metrobus and Metrorail can be extended to biking -- Metrobike.

6.  But like most peer systems, the new bike share system has not included special discount programs for low income riders at the outset of the program.

Boston's Hubway system offers practically free memberships -- $5, including a helmet -- to low income residents participating in qualifying programs.  Boston is a leader in integrating equity programming into biking for transportation.

In "The problem when you define every outcome as a success, you don't learn, and therefore failure is more likely: bike share in Seattle and Los Angeles as examples," I suggested that biking for transportation can be the "killer app" for low income residents, as biking directly to a destination can be a lot faster than waiting for and riding transit, plus getting to and from the transit stop.  LA has an opportunity to grow this element of their bicycle sharing system.