Back to School #3: College 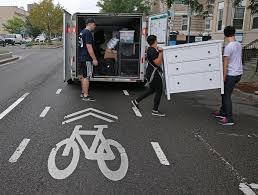 1.  In Boston, there were complaints that people moving in for college too often parked in bike lanes ("As students return, cyclists compete with moving trucks in bike lanes," Boston Globe, photo also).

Oppositionally, in DC, over the past year, American University, George Washington University, and Howard University have sold/leased off-site properties that are going to be redeveloped for market rate housing.

A couple years ago, the Monroe Street Market development opened in Brookland, on land owned by Catholic University therefore generating revenue for the school, and it is reshaping the neighborhood's commercial heart.

This doesn't always work for the best, it can lead to a homogenization of retail, as pointed out in an old Yale Herald story, "The mall next door."

Elsewhere, including the University of Maryland College Park and the University of Connecticut, universities aim to create ancillary real estate developments to strengthen the place character of the college town (also see the past blog entries "More Prince George's County: College Park's militant refusal to become a college town makes it impossible for the city(and maybe the County) to become a great place," "To be a great city, College Park Maryland needs some "there", it needs a center," and "College town follow up: alumni as residents and contributions to community capital"). 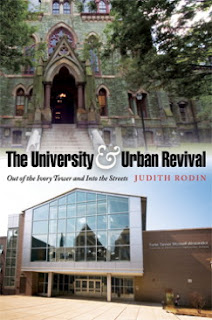 University of Pennsylvania is the most prominent example of long term reinvestment in the neighborhood outside of the campus for revitalization and public safety issues, but many other universities have similar initiatives, such as John Hopkins University in Baltimore.

The book The University and Urban Revival: Out of the Ivory Tower and Into the Streets by Judith Rodin, former president of the University of Pennsylvania, chronicles the revitalization story there.

Working with Historic Macon, Mercer University has invested in historic preservation-based improvement programs in the neighborhoods abutting the campus.

As discussed in "Institutional financial support for employees to buy houses in weak real estate markets," many universities have programs assisting faculty and staff in buying houses in the community, in part as a stabilization measure

The Lincoln Land Institute has an initiative on universities as real estate developers.

For example, the College Park area isn't known for ancillary business development, while it is a different story in places like Cambridge, Massachusetts ("A real estate empire grows in Kendall Square," Boston Globe,"), Ann Arbor, or the Silicon Valley ("The secretive billionaire who built Silicon Valley," Fortune Magazine) where the association with Stanford University is very clear.

4.  Coordination and collaboration among universities within cities.  This interests me a lot.  I think there is a lot of fallow opportunity for this in DC.  Cities like Spokane, Washington and Greensboro, North Carolina ("Better leveraging higher education institutions in cities and counties: Greensboro; Spokane; Mesa; Phoenix; Montgomery County, Maryland; Washington, DC") are leaders. 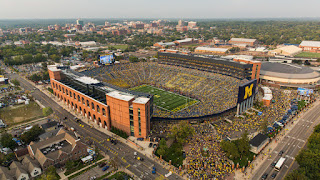 6.  Economic impact of college sports, public funding of sports facilities. Rarer are economic studies of the tourism impact of college sports on the local community ("Tourism economic impact of University of Michigan football").  With the latter, that could influence local community interest in football conference realignment and willingness to subsidize sports facilities ("Funding Sources Differ For Baylor and A&M Stadiums," KBTX-TV).

7.  Property tax issues.  There is more talk about how universities consume a fair amount of community services and create opportunity costs in economic value because of property tax exemptions, which for most communities generate the bulk of local government revenues.  This has even come up in DC lately ("Universities in D.C. avoided $111 million in local property taxes" and "Universities shouldn't be exempt from DC property tax," Washington Post), although it's been an issue in cities like Boston and Providence for some time.  Providence has even proposed a "per capita tax" on college students ("Mayor Proposes a College Attendance Head Tax In Rhode Island," Tax Foundation).

Interestingly, Ontario and maybe all of Canada doesn't have a property tax exemption for nonprofits or other government authorities, meaning that even the Province of Ontario pays property tax to Toronto on the Parliament building. I haven't looked into it in depth, it might be that the property tax structure builds in a pricing scheme based on the consumption of public services for particular properties, so that there is a kind of break for nonprofits compared to straight up commercial use.

8. Biking as transportation.  University of Louisville got big play ("UofL forges path to change how students commute") in its local paper, the Louisville Courier-Journal, for winning a sustainability award for its Earn-A-Bike Program, which provides a $400 credit to buy a bike, presumably used for transportation not recreation.  The article made it out to be a first of its kind program, but it isn't.  Ripon College launched a similar kind of program about 8 years ago ("Ripon College gives freshmen free bikes for no-car pledges," Milwaukee Journal-Sentinel).


The goals of U of L's Earn-Bike Program include:

►Reducing the vehicle miles traveled to campus (and associated pollution)
► Reducing the number of vehicles that must be parked on and around campus
► Increasing health and activity levels within the U of L community
► Saving money you would otherwise spend on gas, parking and other automobile expenses
► Reducing traffic congestion
► Rewarding individuals for not driving to campus

Separately from the ever expanding bike sharing idea (some universities, like Harvard and MIT, pay for bike share stations rather than expecting a local government to do so), other schools have comparable programs where students can get bikes to use for an entire term for free or a low price, again, as a transportation demand management measure.

Nevertheless, a lot more attention should be paid to college campuses in terms of transportation demand management more generally, but also for the opportunity to develop the routinization of pro-sustainable mobility behaviors. 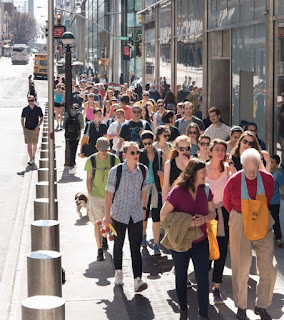 9.  Interaction/exploration programs introducing students to the city.  But I am particularly interested in focused college initiatives that introduce students to the broader community in a focused way, noting that plenty of universities have experiential learning programs doing field work and service in community settings.  These stick out:

What distinguishes this from Professor Ken Jackson's bike tour of New York City ("Taking a Spin Through New York City's History," New York Times is that "The Big Walk" is held within the first couple weeks of starting school.

DePaul University's Chicago Quarter.  I don't think any university has an offering quite like DePaul's.  The Chicago Quarter is a set of over 100 courses for freshmen, designed to:


acquaint first-year students at DePaul with the metropolitan community, its neighborhoods, cultures, people, institutions, organizations and issues. It is through these classes that students make first contact with both the university's urban identity and its Vincentian mission. Students also learn about university life, resources, and how to be a successful student. This learning is accomplished through a variety of means, but particularly through first-hand observation, participation, personal discovery, reflection, discussion, and guest lectures.

A bunch of universities have university-community volunteer days, some at the outset of the academic year, others during it.  From "“A great kind of bonding experience:” Carroll University hosts annual Freshman Day of Service":


The annual Freshman Day of Service is in its eighth year. It offers a chance for first-year students to get out and give back to the area they’ll call home for the next four years.

“It's kind of like an icebreaker," said another freshman, Mireya Ramos. "To do something as a group as well, but also help the community.”

About 700 Carroll freshmen on Tuesday, September 6th split up between 30 different non-profits and businesses in Waukesha and Milwaukee. 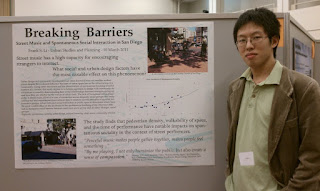 UCSD's end of the school year public policy presentations. Typically, urban planning students have major studio projects to finish out their studies. Usually these are field projects in local communities, and result in public presentations and the production of reports.

I've often thought that all the student research that occurs in a typical academic year could be harvested, instead of lost to papers randomly distributed and retained.