See "Council members ask Rams to pay for LAPD at games" and "No more freebies for the Rams," Los Angeles Times.

Also see the past blog entry, "Sports events and the transit city: participation in transportation demand management shouldn't be an option." 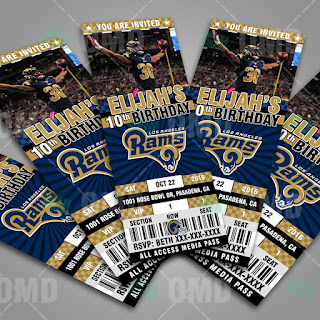 Put it in the contract.  I have suggested in the past that when cities fund stadiums and arenas, they need to put these kinds of provisions in contracts. For example in DC, the owners of the Verizon Center--oriented to transit access for attendees anyway--have a contract with the local transit authority to pay for extended service hours on the subway system when games run late. The baseball team, in a stadium built by the city for a cost of $650 million, refuses to make such arrangements.

It should have been in the contract.

Put it in the zoning regulations.  But in any case, zoning regulations concerning stadiums and arenas and public events, sporting or otherwise, like concerts, etc., should require that the stadium manager be responsible for paying for security, traffic management, and related costs for handling events by the local government(s).

It's interesting that many cities haven't done this. For example, Glendale, Arizona spends as much or more on security for sporting events in its town as it gets back in increased revenue ("Glendale's request to cover Super Bowl safety costs rejected," Arizona Republic).  And Los Angeles doesn't seem to have done this as it relates to The Coliseum, the stadium owned by USC, which is in a tricky status at the moment, in use by both professional and college football.

In the Netherlands, the land use planning regulatory system is set up to direct uses only to those places where existing transportation capacity can meet the trip demands created by the use ("Utrecht: 'ABC' Planning as a planning instrument in urban transport policy"). 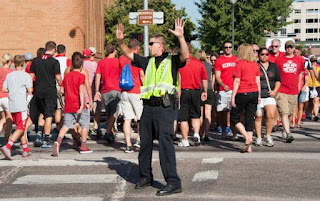 How to handle costs incurred by college athletic events?  Interestingly, I don't know how this is handled in other communities, say Columbus with Ohio State, Ann Arbor with the University of Michigan, Seattle and the University of Washington, etc., as it relates to college events.

It happens the Lincoln Journal-Star ("Setting up gameday: The goal for police on Saturdays is to avoid the 'Uh, oh' moments") is running a series on how the city handles "Game Day" for football games at the University of Nebraska.  From the article:


... [The university] has a 25-page book of “gameday operations,” and another 20-page “book for the day of the game,” helps coordinate the efforts of more than 3,200 people in and around the stadium to keep people safe and make sure the day is as enjoyable as possible.

Owen Yardley, UNL chief of police, holds meetings in January, in the spring and the week before a game.

He conducts his force of some 30 officers, with the addition of 15 Lancaster County sheriff's deputies and some private security personnel. ...

The city has four ambulances ready, 16 firefighters, six EMTs, and more on call.

"We coordinate efforts with Public Works and the State Patrol; we can delay the lights at key intersections we cover in the rest of the city at the same time," said Jason Stille, captain of LPD's Center Team. ...

The Nebraska State Patrol has three helicopter pilots ready to fly one helicopter — with Trooper Dave Nelson situated somewhere (but not in his basement eating Cheetos, a spokesperson said) taking the messages and passing them along to the fans driving to and from the stadium.

Simply, the UNL force has the stadium and the campus, LPD has the city (including traffic controls at 10th and Q, and Ninth and Q), the State Patrol has the interstates (I-180 and I-80), and Lancaster County sheriff's deputies have some work inside the stadium, some outside and a few places in between.

I do know that the Utah Transit Authority has an agreement with the University of Utah so that tickets to certain sports events include use of the transit system ("Your Ticket is Your UTA Fare to U of U Football.

In Blacksburg, Virginia, home to Virginia Tech, the local bus system charges $5 fares for people using buses for the three hours before the start of the game, but then free service or low cost service the rest of the time.  For basketball, they provide a free shuttle service.

Cities manage to charge local community groups and events when then incur such costs.  It's also ironic because cities are big on charging for emergency services, street closure permits, etc., for community festivals, to the point where the costs exceed the revenues and many local festivals are shutting down as a result ("Street festivals and city fees"). 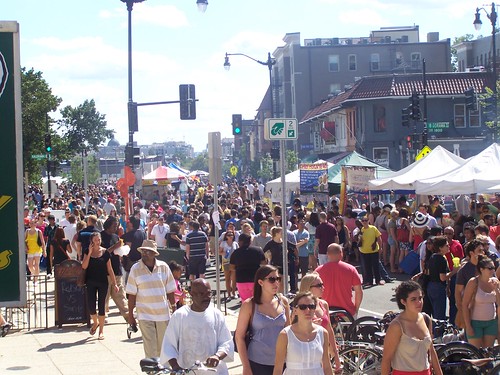 This has happened in DC, with the Mount Pleasant Festival and Adams Morgan Day--the latter ("Adams Morgan Day festival is canceled this year," Washington Post, 2015) is still on, but in a much circumscribed form in that it doesn't "shut down the street" for a real festival, but operates on the sidewalks and within buildings.  It's an event but no longer a street festival. 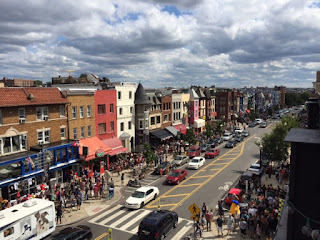 Adams Morgan Day 2016 on the sidewalk, not the street.  Photo from DCInno.

Special transit services for athletic events.  The MTA in Greater New York runs various special transit services on its railroad lines, such as to a recent golf tournament ("LIRR's Extra Service is Easiest Way to See PGA TOUR's Top Golfers at "The Barclays" at Bethpage State Park in Farmingdale. L.I. August 21-26") and to football games in New Jersey.  In 2013, MTA offered free fare in association with purchasing tournament tickets for the 2013 Women's tournament.  Probably, they did a package deal with the organizers.

MBTA runs special football trains to New England Patriots games too.  Metrolink does the same for baseball and hockey games in Anaheim.