The original piece covered what to do concerning "Beach Drive" and "I-270" both north-south commuter routes connecting Northwest DC and Montgomery County, Maryland.

I started writing a third section in the piece, on the Metrorail Red Line in association with the various SafeTrack maintenance service interruptions--for example, will be closed for 23 days between Fort Totten and NoMA Stations--but I excised the section because I didn't feels as confident about recommendations for the western leg of the Red Line.

But for the most part, as a suite of recommendations, because the commuter shed of Beach Drive, I-270, and the Metrorail Red Line overlap and intersect, we can probably come up with one suite of broad recommendations, where some pertain more to certain elements of the transportation system than others.

Tom Quinn countered with some other recommendations than those in the original post, and pointed out some key omissions.  Additions are italicized.

Note that in the section on I-270 in the previous entry, I neglected to mention the Corridor Cities Transitway project, a proposed enhanced transit service for Upper Montgomery County.  But it wasn't particularly relevant as the proposed service will be an intra-county service, while the entry focused on dealing with "through" traffic between DC and Montgomery and Frederick Counties.

1.  The city could institute HOV-2 on 16th Street NW, Connecticut Avenue NW (and maybe Georgia Avenue) as an interim measure.

DC has not yet instituted HOV-2 on any surface street arterials.  In the metropolitan area, perhaps the only jurisdiction that has is Alexandria.  DC could work with the State Highway Administration and Montgomery County for parallel actions on Maryland arterials.

2.  Create temporary bus only lanes on 16th Street, Connecticut Avenue, and Georgia Avenue. (and other streets as determined).  Such lanes are being developed for 16th Street anyway.  This would be facilitated by the addition of rush hour parking restrictions so that a dedicated bus lane could be provided.

3.  Develop more nuanced commuter bus services to DC, Bethesda, and Silver Spring, as needed.  Consider developing these routes more permanently.  For various reasons adding commuter bus may be justifiable regardless of the existence of Metrorail and regional Metrobus service.

Note the gaps in coverage in the Maryland MTA Commuter Bus program as it relates to Bethesda and Silver Spring specifically. 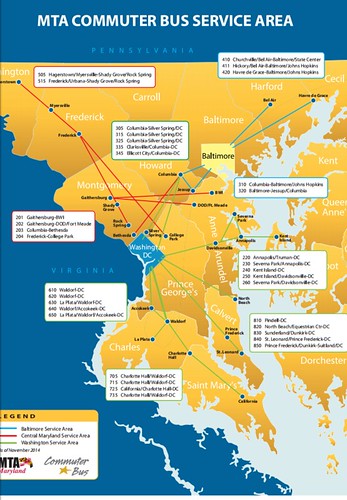 4.  Create better cross-jurisdictional connections by extending regional Metrobus lines that currently stop at the DC-Montgomery County border, such as extending the 30s bus line to Bethesda from its end point at Western Avenue.

Consider creating a through bus service on Connecticut Avenue serving both DC and Montgomery County.

The 30s line buses stop in Friendship Heights (in the older days there used to be more regional service up and down Rockville Pike/Wisconsin Avenue) a couple miles short of Bethesda, a major destination.  By contrast, the "DC bus routes for 16th St. and Georgia Ave. do not stop at Eastern Avenue but are continued to the Silver Spring Transit Center.

I've written about some of this before, especially between Bethesda and Friendship Heights.

Just as Metrorail desires to cut back on night time transit service should be used to facilitate the development of an integrated overnight transit network, the various transportation infrastructure interruptions should be used to tweak, improve, and extend the "regional" Metrobus network where gaps are particularly evident.

Note that Metrorail has limited slack bus capacity which constrains the ability to exercise such service changes and increases in the short term.

5.  Further develop ride-matching/car pooling programs and support, for both individuals and van pool programs like vRide. 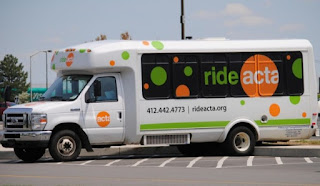 6.  Support where useful "microtransit" services like Bridg.  Microtransit services can be an essential addition to suburban bus hubs, as discussed in Part 2 of this series, with the Airport Corridor Transportation Association in suburban Allegheny County, Pennsylvania being a particular good model.

7.  Support long distance bicycle commuting through focused initiatives, especially with e-bikes. The Urban Cycle Loan program of the London Cycling Campaign in a number of London communities is a model for trying out biking.

This needs to be paired with greater general promotion of longer distance bike commuting.  With e-bikes, a 10 mile bike commute is realizable when most people would not consider riding such distances every day without an e-assist. 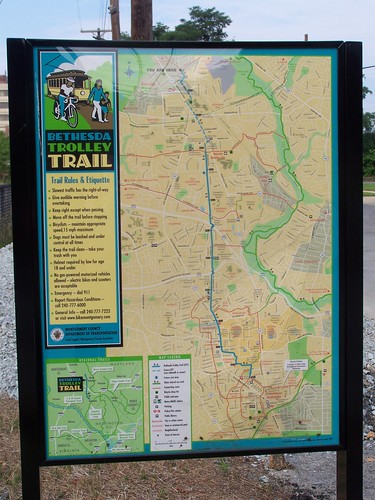 There is a decent trail network between Northwest DC and Montgomery County, but it has room for improvement.

8. Expand MARC passenger rail service on the Brunswick Line, in both directions throughout the day. The MARC Brunswick Line provides service to stations in Montgomery County, including major destinations in Gaithersburg, Rockville, and Silver Spring.

But the service is designed to move people only from north to south in the morning and south to north in the evening, making "reverse commuting" impossible.

By contrast the MARC Penn Line supports travel in both directions from early in the morning til late at night, while the Camden Line provides a limited set of bi-directional service during morning and evening rush periods. 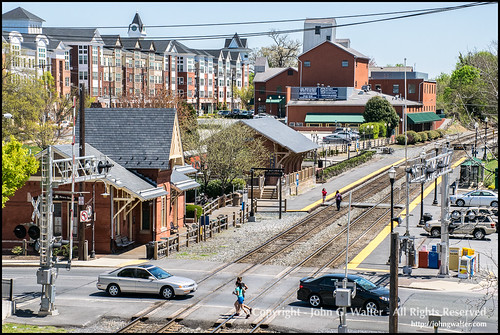 Note that MARC has limited slack railroad passenger car capacity which constrains the ability to exercise such service changes and increases in the short term.  But organizing Metrorail closures in a manner that can be accommodated by MARC and CSX through changes and expansion in service should be explored.  SEPTA proved it is possible to "borrow" cars from NJ Transit.  That could be an option here.

An option would be to create a MARC branch that would split after the Metropolitan Branch Station and could run south along I-270 to Bethesda (and ideally eventually, underground through DC to Union Station and could maybe even provide my underground RER line to Northern Virginia, see below).

It might be that present services to Rockville and eventually to White Flint on the MARC line would be enough, using the current configuration, augmented by bi-directional service would be enough, because people can transfer from the railroad to the Red Line from those locations and continue to Bethesda or Downtown DC.

But Bethesda is a major destination in the metropolitan transportation network as is West Northwest DC and this might be a way to provide additional railroad passenger service and build a more robust high capacity transit network.

13.  It's been suggested that the western leg of the Metrorail should be extended to Gaithersburg and Germantown.  See the ACT webpage, "A Transit Vision for the I-270 Corridor."  That would obviate a large part of the need for MARC service to Bethesda and further into Northwest DC.

Potential for an RER/Crossrail type railroad line to Arlington County and westward including a new Downtown rail station for DC.  RER is a suburban commuter railroad system in Greater Paris. Inside the city, the lines are almost completely underground.  Similarly, London's Crossrail will add new rail service to the city via underground tunnels and stations in Central London.

A few years ago, Dan Malouff, a transportation planner and writer/webmaster of the BeyondDC website, suggested in an offhand written comment the need to create another major railroad station in the core of the region (within the Beltway) to ease capacity demands on Union Station. 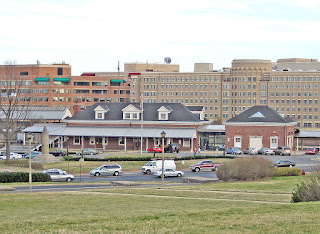 Alexandria Union Station with Metrorail in the back to the left.  Wikipedia photo by Choster.

Alexandria and Crystal City are the two train stations in Northern Virginia serving closer in destinations, focused on serving South Arlington and Alexandria (Alexandria is also an Amtrak stop).

The need for a station and service as hypothesized would be in North Arlington and points west (Tysons Corner), but there isn't existing railroad right of way on the surface which would facilitate the creation of such service.  (Perhaps the Washington & Old Dominion Trail could be returned to rail service in the modern era, but the railroad shut down long before the rise of Northern Virginia as a business and residential powerhouse)

Using the RER and Crossrail as a model, a way to provide new railroad passenger service in a northwesterly direction would be to create an underground railroad line from DC Union Station northwest into Arlington County, which could be extended further into Fairfax County and beyond.

At the same time, at least two additional stations should be constructed between Union Station and Arlington Station, one in DC and one in Rosslyn. 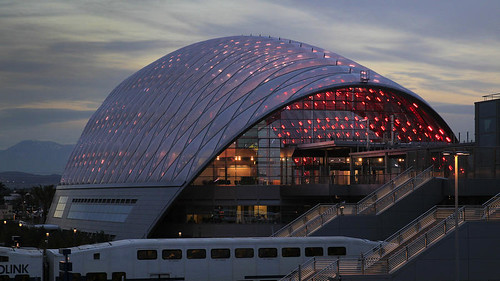 New Anaheim Regional Transportation Intermodal Center (ARTIC).  A train station in the West End of DC and in Arlington could be built on the lower floors/in the sub-basement levels of an otherwise mixed use building, with office and other uses above. Photo by Allan Schaben, Los Angeles Times.

I don't know if this qualifies as a "Traffic Mitigation Plan" but DDOT has a bunch of recommendations for alternative routes in response to the Beach Drive closures.