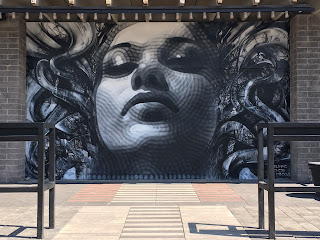 Yes, Phoenix and its metropolitan area is a poster child for sprawl.  That being said, there is enough going on there to keep a traditional urbanist occupied for awhile, from various urban design and transportation initiatives in Tempe, the light rail system, the Roosevelt Row arts district in Phoenix, and many other elements, such as a regional bike trail system or the Phoenix Biotechnology Campus and initiative.

I like the idea of an "Urban Design" week as opposed to an "Architecture Week," because you get place into the picture, and aren't solely focused on "the buildings."  What people call "historic preservation" I argue is the nexus of place, architecture, and people.

decent well made art- and not just garbage done by school kids- can bring in tourist dollars and is attractive and can add to a city. sadly, many places wish to save money by having school kids do public art - this is a feel good measure- robs real professional artists of work opps, and results in crappy and low quality public art. Philly's mural arts program gets around this insidious trend in a unique way- placating the feel good types who think this is a good idea- but having professional artists do the design and oversee kids who just help out and learn from them.

there was a not very well thought out article within the last 10 days on GGW about how WMATA should put murals on all its blank walls.

Besides the fact that public art is more than merely murals, the first thing that went through my mind is that there are a lot of lousy murals, many of which don't involve professional artists.

that is the problem- in the US fine arts has been degraded to the point where many people do not understand that it is a real business/occupation and that in order to get real quality you must pay for it. Too many people are taught to disregard fine arts or relegate it to a hobby or something people do as a pastime for relaxation. Mount Rushmore was not conceived and carved by children or by amateurs- and one should never expect to get quality of this sort for nothing.

Such a great articles in my carrier, It's wonderful commands like easiest understand words of knowledge in information's.

Jump into an immense learning experience of DevOps Training in Chennai from Infycle Technologies, the best software training institute in Chennai. Also, an excellent place to get other demanded technical courses like Data Science, Big Data, BlockChain, Full Stack and Mean Stack Development, Digital Marketing with Graphic Design, etc. with 100+ Live Practical Sessions. For more queries for your career, call us on +91-7504633633, +91-7502633633.