Leveraging music for cultural and economic development: part one, opera 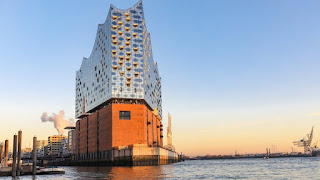 The Elbphilharmonie building was designed to look like the prow of a ship, in honor of its location on the city's waterfront.  Photo: Marcelo Hernandez / Hamburg Abendblatt.

1.  Hamburg.  After many many years of construction and setbacks--partly because the opera building was constructed on top of an existing historic building, the new Elbphilharmonie, finally opened in January, after having first been promised for 2009.  The cost ended up as much as ten times the initial estimate, and was paid in its entirety by the local government.

Besides primary and secondary halls and related facilities, the building, located in the redeveloping waterfront district of HafenCity, includes a hotel, luxury condominiums, restaurants, and a viewing terrace overlooking the waterfront. 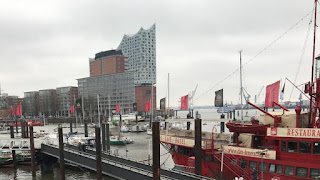 Hamburg is already a major destination for the presentation of  musicals ("'Tarzan' and 'Lion King' Make Hamburg a Theater City," New York Times), and the Elbphilharmonie further broadens the appeal of the city as a destination for the performing arts ("In Hamburg, a New Musical Landmark for a City With Plans, NYT).

According to Mark Swed's review ("What does this critic hear at the new Elbphilharmonie concert hall? The sound of the future") in the Los Angeles Times, the building is a big attraction already, and presents concerts daily, all of which have sold out:


More than a million visitors have already taken the 2½-minute ride on a curved escalator through the “launching pad” (a tube) that leads to the main public area, a plaza with a terrace where you can walk the perimeter outdoors with stunning views of the harbor and the city, have a bite to eat and hit the ample souvenir shop. ...

There are concerts most days, all sold out through August, including a large summer festival. People are preparing to pounce the moment seats for the second season go on sale, and it doesn’t seem to matter what is being performed, be it a symphony, a string quartet, new music, early music, world music, pop or anything in between.

The vast majority of the music is classical, which has excited Hamburg’s classical community no end. 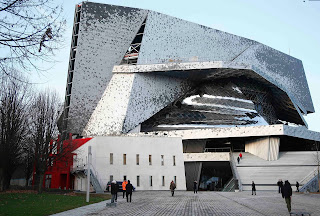 The Philharmonie de Paris is accessed via an imposing staircase. Photograph: CHARLES PLATIAU/REUTERS

2.  Paris.  As part of the trend of the construction of new modern concert halls in European cities such as Helsinki and Hamburg, a new concert hall opened in 2015 ("Philharmonie de Paris: Jean Nouvel's €390m spaceship crash-lands in France," Guardian).

As interestingly, a new concert complex is about to open in the Paris suburbs.  Called La Seine Musicale, it's built on an island on a site that had been an automobile manufacturing plant. 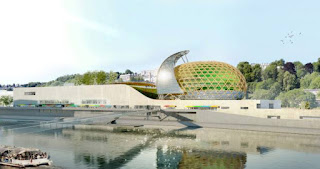 What La Seine Musicale will look like on completion (Baudin Chateauneuf/Shiger Ban Architect).

There will be a large auditorium (6,000 seats) and a smaller concert hall (1.150 seats), along with recording studios, a public garden, and retail and restaurants.

The music program won't be limited to classical music--Bob Dylan will open the auditorium with an inaugural concert on April 22nd.

In the US, suburban music halls have had some difficulties maintaining interest, in part reflecting perhaps less interest in high culture, although many universities maintain active performing arts programs,  Still, the opening of high quality concert facilities in suburbs in part is an indicator of the maturation of suburban communities as "complete places."

3.  Chicago. Since the Great Recession, a number of opera companies shut down (San Diego, New York City, etc.), and audiences have been declining. Unlike in Europe, there appears to be less demand in the US for classical music-related programming.

And local opera companies face competition from the digital broadcasts of the New York City-based Metropolitan Opera, shown in a network of theaters across the country. Likely this cuts into the local audience for live performances, since they can see very high quality productions on the screen for less than the cost of a ticket to a local production.

Crain's Chicago Business writes about the Lyric Opera ("Can Lyric Opera survive the 21st century?," on the challenges faced by the opera company. From the article:


It's showering subscribers, who long ago stopped packing the house season after season, with thank-you notes, more efficient valet parking and other perks. Operagoers will now find a sushi kiosk in the lobby on some nights and also reusable lidded beverage cups, the better to enjoy one's cocktail during a performance of "Carmen."

To keep operations sustainable through the 21st century, Lyric has to court new subscribers and ticket buyers in a changing arts world that values casualness and flexibility.​

That's why Lyric's to-do list is almost as long as "Tristan und Isolde": Court single-ticket buyers, hang on to subscribers, cut costs, update the stage and systems, and modernize marketing.

It's doing all that in "a business environment that is less predictable and more volatile than any of us can ever remember," says Anthony Freud, Lyric's general director and CEO.

The article mentions how the Company hasn't had a sold out season since 2001-2, and discusses the various initiatives Lyric Opera is taking to maintain interest, increase ticket sales, and generate other sources of income. 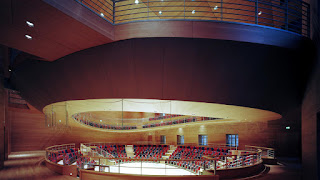 
... Frank Gehry’s oval design, with no stage, merely a center, genuinely seems to open up, in the spirit of Boulez’s long-held desire for a flexible salle modulable, the possibility of the “thinking ear”: to engage, to reflect, to make itself part of the performance. The greatest possible distance between the conductor and the most distant member of the audience (682 seats in total) is just 14 meters. There is intimacy—the intimacy, its initiators hope, of collaborative endeavor.


The 682-seat hall is tucked into one corner of a four-story building from 1955 that was designed by architect Richard Paulick to store sets for the Berlin State Opera, where Barenboim is music director. The building, which sits rather anonymously on a corner in the Mitte district, in the heart of Berlin, backing up to an important civic plaza called Bebelplatz, is now the headquarters for the Barenboim-Said Academy, a conservatory that includes young Israeli and Arab musicians.

Conclusion. An email comment I received on this article originally made the point that the average US city is fine with funding facilities for professional sports, less so for the arts.

there is a higher regard for the function of the fine arts in society in places like Germany where they are willing to spend big Euros on what is seen here as " superfluous" or marginal activity. Yet we in DC have what I have seen documented as a billion dollar economy in the arts and related fields of employment- and our local governments fail to recognize this- and still push " box seats" for sports venues over the fine arts. If anything they need to be doing both and not favoring one over the other. In Germany sports are definitely NOT given the short shrift.

Interesting article about Opera Philadelphia, and how after doing extensive market research, they found that there are distinctly different market segments for traditional opera and new opera. But committed to diversifying their audience and support, they have committed to both.

Speaking of music, I've just discovered that you can download any existing music piece from torrent websites and that's great. But I am always afraid of getting a virus when I download stuff online so I just checked out Bitdefender mac review and I think that it may solve my problem.

Collaboration between Austin Symphony Orchestra and a local DJ

The program was initiated in 2018 as a new way of getting ASO out of the concert hall and connected to the contemporary music community in a way it hadn't been before. The plan was to match four DJs with four classical pieces (yes, program namesake Bach was represented) and have them create mixes inspired by the older music, then stick it in a club where the audience would get to hear four ASO musicians play each classical work live before each DJ launched into their thumping creation. What happened the first time ASO tested that concept on the street – on Dirty Sixth of all streets – the result was a packed Parish and a crowd that was equally jazzed about the Bach and the beats. With the experiment such a success, ASO said, "Let's do it again."