I use the BWI Airport outside of Baltimore as an example of best practice in terms of integrating off-airport rail stations into the ground transportation program.

At one time, Amtrak provided shuttle services between the rail station and the airport, but a few years ago, recognizing the importance of controlling the quality of the experience and the necessity of high quality connections between modes, the Airport integrated the BWI Rail Station into their ground transportation program.

In 2016, in "A brief comment on ground transportation at National Airport vis a vis VRE rail service," I made the point (building on comments offered in a GGW article) that National Airport should do the same thing wrt the Crystal City Rail Station, which serves as a stop on the VRE rail line.

Amtrak doesn't stop there, but perhaps it could, a point I didn't make in the earlier post.

A more recent entry, "Why not a bicycle hub at National Airport?: focused on capturing worker trips but open to all," besides a discussion about carsharing access, discusses creating a true bike hub, using the model of Heathrow Airport, and given the fact that the airport is served by the Mount Vernon Trail, one of the metropolitan area's most heavily used bicycle commuting routes.

The comment thread mentioned the DCA Connection Feasibility Study being led by the Crystal City Business Improvement District. But I would argue that's not an all-encompassing study, merely looking at one element, a better pedestrian connection.

The comment thread also mentioned coverage in the Washington Post about airports losing parking revenue as more people get to airports in other ways ("The popularity of Uber, Lyft boosts airport revenue but there are tradeoffs").

The rail station "abuts" the airport, but is separated from it by the George Washington Parkway and railroad lines. 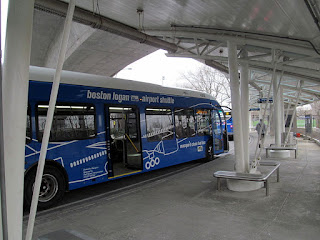 Logan Airport provides shuttle services to the nearby Airport T Station, which unlike the National Airport Metrorail Station, is not on the grounds of Logan Airport.

Beyond that, there is also a "Water Transportation Terminal" serving Logan Airport for ferry and water taxi services, and shuttle service is provided to that location too.

Given that the DC area has been trying to develop water transportation services for a long time ("At ferry summit, a vision emerges for a commuter system along the Potomac River," Washington Post) and the recent expansion of such services concomitant with the opening of the Wharf development on DC's Southwest waterfront ("The Wharf's new water taxi embarks on a maiden voyage," WTOP), National Airport's location alongside the Potomac River, and the presence of an NPS parking lot next to the airport abutting the river (often used by taxi drivers), it would be possible to create a similar service there, were NPS to be amenable. 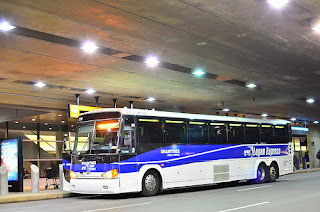 In addition, called Logan Express, certain express bus services to Logan Airport are run by the airport authority from suburban locations.  Closer in, the Back Bay Express also provides special services to the airport.

A form of "Logan Express" is run by Maryland MTA serving BWI Airport via the Inter County Connector, staging from the rail station, not the airport directly.

While National Airport may not "need" that kind of dedicated express service, because the rail station could provide this kind of opportunity at least in the I-95 corridor, likely Dulles Airport could use such a complementary program ("Dulles International Airport struggles to find its footing," Washington Post, 2014), even with the addition of Silver Line Metrorail service in the next couple years. 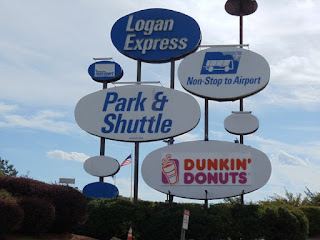 Probably, the Metropolitan Washington Airports Authority and the State of Virginia should do a transportation planning exercise for both airports, not limited to Metrorail and traditional public transit services, to think about such services, including better connections from Maryland, although the State of Maryland may not be too willing "to help" given that Dulles and BWI Airports compete.

While not practical for National Airport and Crystal City, separately the idea has been floated to add a moving sidewalk connection from the closest Logan terminal to the Airport T stop ("Potential moving walkway at Logan Airport could land in record books," Boston Globe).  The distance is about one-half mile. 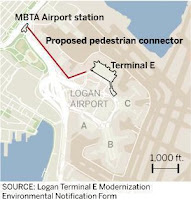 I definitely think such a connection between the Midway Airport L Station and the actual airport terminal would make a lot of sense in Chicago. 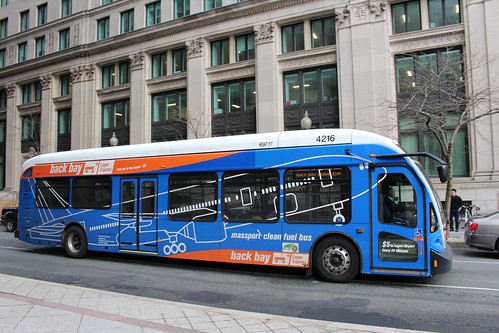 Seems like the ArlNow comment stream has definitely degraded. I only check in to that site infrequently. Not as bad as DCist, but ...

Still one of the photo comments showed people with a lot of luggage. Who is the target market for the pedestrian bridge, would integrating Crystal City into the airport's ground transportation system make more sense?

Even if it doesn't "make more sense" that can happen a lot sooner than a pedestrian bridge.

2. great catch on the Yellow Coach feature. I had seen an image or two of a double deck bus in NYC, but never such an extensive set of info/images, nor a discussion about such buses were in use into the 1940s.

Relatedly of possible interest, GM developed a few articulated buses for Ontario, but they never went into wide production.

Midway Airport will be getting an upgraded pedestrian connection to CTA as the current project to expand the main garage. News coverage emphasizes that the passage will be climate controlled, but I believe it will also include more moving sidewalks.

I guess I haven't been keeping up. Thanks for letting me know.

Note that Atlanta is doing something similar, although not over as long a distance, because of exposure to the elements.

2. Speaking of Midway, maybe it's too an example, like Dulles vis a vis Logan Express, of building a better network of long distance bus service.

Probably more airports need to get a bit more involved in this element of ground transportation.

Interesting column on O'Hare and the HSR proposal from Downtown. The writer makes the point that a majority of trips to O'Hare are not from Downtown and it would make more sense to develop a better balanced and multipronged proposal.

Massport considering rail tram connections between terminals and the Blue Line T Station, to reduce congestion on the airport campus, and to increase the number of people coming to the airport by transit.

Toronto is also doing a broader ranged transportation study for the airport.

Appreciate this informative post. People can get ground transportation at airport updates from this nice post. Thanks!
stansted airport cheap parking