An op-ed ("Trump is right: Privatize Reagan National and Dulles International Airports") in the Washington Post over the weekend supports that idea as it relates to two of the region's airports, both located in Virginia, National Airport right outside of DC, and Dulles Airport, focused on international travel, and about 30 miles from DC in Loudoun County.

The article says very little, other than that management and operation is better, about good and bad examples.

Arguably, from an asset management standpoint ("We are all asset managers now") this makes sense to generate money as well as to put the assets in the hands of entities that can do a better job of maximizing utility and outcomes, when the federal government in this case is a somewhat distant manager.

Although separate from the ultimate control being held by the Feds, this entity too can be disconnected from providing the best service.

Still, what to do?

Three questions:  It's important to separate out:
There are two very interesting articles that discuss serious limits to successful privatization of airports, in how privatization, at least in how it's carried out, definitely may not serve the public interest.

1.  At JFK decentralized operation doesn't work very well outside of normal circumstances.  While the airport remains owned by the public through the Port Authority of New York and New Jersey, the authority has been busy getting out of the business of running the airport, outsourcing operations on a terminal by terminal basis ("Reinventing the Port Authority," City Journal, 1996). 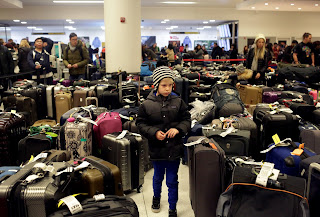 Passengers waded through a sea of bags from delayed flights at Terminal 4 at Kennedy International Airport on Sunday. Credit Yana Paskova for The New York Times.


Recent failures in managing storm effects at Kennedy Airport (""Cascading failures" strand thousands at flooded, frigid JFK," CBS News) were dissected by the New York Times in a comparison of JFK to Logan Airport in Boston ("How Boston's Airport Bounced Back From the Storm That Crippled JFK").

The latter airport is owned and managed by a state authority, with a serious focus on operational success, and daily management meetings led by the director, and a focus on building cooperation and a focus on outcomes on the part of otherwise competitive entities.

By contrast, various privatization efforts at JFK have balkanized operations between many different entities running different terminals, and the Port Authority, which still owns the airport, hasn't stepped in and executed the kind of heavy hand of coordination that is held by Massport.

So when the least bit goes wrong at JFK, operations can quickly degenerate to catastrophic levels, when faced with similar events at Logan, the airport manages reasonably fine.

Still, that came with a great deal of effort.  According to previous coverage, Massport had been a cesspool of patronage ("Change Ahead for Troubled Boston Airport Agency," 2001) but over time, the management priority for the airport shifted to a focus on high quality operations.

2.  Heathrow privatization: great economic returns for the owners at the expense of airport users. The London Times has a damning expose of Heathrow under private operation, "Heathrow: the cash machine with an airport attached."

Because it is regulated somewhat like a utility, with a profit level based on the size of its "regulatory asset base" which is based on capital investment and expenditure, the airport is incentivized to waste money.

Profits are made through a capitation fee on each passenger, currently about £20 per arrival and departure. The airport is lightly regulated with little substantive oversight from the UK government. Various construction projects are significantly more expensive compared to other airports. From the article:


... a report buried on the CAA’s website gives a critique of Heathrow’s efficiency versus other international airports. The comparison of a number of leading hubs by PA Consulting showed that Heathrow spends £15.78 per passenger on operations. Only Tokyo’s Narita airport spends more. Earnings per passenger are well above all its peers, too, except for Hong Kong.

While Heathrow has only paid £30 million in taxes on earnings since 2006, it has paid £3 billion in dividends over the same period.  Last year the airport paid a dividend of £325 million.

Other problems with US airports and the federal government: transit connections.  Unfortunately, current regulations do not allow passenger facility fees to be used to pay for connections to existing public transit systems.  As a result, in many communities the local transit system is not well integrated into airports, or at least, when the connections are made, the airport does not pay towards the cost.

Note that there is an interesting article from 2013 in CityLab, "Why Don't More U.S. Airports Connect to Amtrak?," about the connection between Amtrak service and airports and a GAO report on the subject, which doesn't find great demand for such connections.  I don't doubt that's true, because it misses the point: better connections to airports are required within regions, and most Amtrak service is multi-state and very long distance. From the article:

But the barriers outlined by GAO are significant. Generally speaking, U.S. metro areas are less dense and farther apart than those in Europe, making intercity rail service more difficult to manage. The combination of relatively cheap gas and a long history of highway building makes travel to and from an airport by car a very viable option. Limited federal funding — with no single source dedicated exclusively to air-rail projects — is also a significant obstacle.

But plenty of areas, including DC-Baltimore, have regional railroad and/or transit systems that provide connections to local airports, even if the connection might require some ground transportation -- National Airport, BWI, Philadelphia, Newark, Logan, O'Hare -- and with transit National Airport, Newark, JFK, Hopkins in Cleveland, Portland, SF, Seattle, Denver, O'Hare, Minneapolis, come to mind too, among others.

Point on scenario planning and the possibility of selling the airports. One of the points I make about broad range planning, and note that the regional transportation planning entity here doesn't have a plan for the airports, and in the past I've suggested that the DC and Baltimore planning organizations could do some joint airport planning, is that when you have a plan in place, you can plan for contingencies, including the scenario of the selling off of the Dulles and National Airports. With a plan, you can have a course of action to react, to even be proactive.

The DC region and to some extent the State of Virginia, which does have a Department of Aviation, and where the two airports are located, is not so positioned.

Although in this region, the fact that BWI would remain publicly owned could be a check on untoward business acts.

The DC Metropolitan Planning Organization/Metropolitan Washington County of Governments and the Virginia Department of Aviation ought to get cracking on regional airport planning and scenario planning concerning privatization.

just one quick point -- another useful metric is not just looking at return to shareholder but how much is being re-investe in the entity.

So yes Heathrow has a lot of money being thrown out -- the question I'd ask is how much is being re-invested and is the public seeing the benefit of that?

(the UK policies on taxing air travel as a luxury/carbon intensive good don't help either).*

Reminds me of when the USG took out the mail contacts for railroads, which caused the complete collapse of passenger service in a few years.


* when I did live in Arlington it was right under the flight path, and everything outside was covered in a fine particulate matter from the jet exhaust. So yes, there are massive externalities with air travel.

I didn't discuss that, but it's a big element of the LT story, that there should be a cap on debt, that dividends should be halted if the debt is too high.

The airlines are concerned that because the airport is loaded with debt (a la Toys R Us) that building a third runway might be hard to finance.

(A comment made a point that with Crossrail, Stansted becomes a viable option too.)

Yeah I've always felt a lot of these infrastructure plays are just ways to move debt off the book of a state entity -- see DC Water and WMATA for two examples here.

Absolutely. That's especially the issue in the UK wrt the "Private Finance Initiative."