Roosevelt Island is a National Park Service installation in the middle of the Potomac River, but it is only accessible from Virginia.  When I worked with the Foggy Bottom Association in 2007 doing some "visioning sessions" on dealing with civic facilities and other issues, this was one of the issues raised. We didn't get to the point of focusing on that particular concern other than suggesting the possibility of a bridge.  From the NPS Roosevelt Island webpage:


Can I land a boat on the island?
The north and northeast sides of the island tend to have the firmest sand and are best for landing a canoe or kayak. The rest of the shoreline can be quite mucky. If you land at the northeast corner of the island you can reach the Swamp Trail. There is no way to secure a boat, so be prepared to leave someone with yours to prevent it from floating away on the tide or being stolen.

Why not build docks on the DC and Virginia sides of the island? 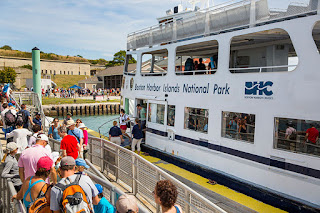 But looking at today's City Paper e-letter which as part of its humor quotient, mentions Roosevelt Island in the context of a "missed connections" ad, what popped into my head was "why not create a summer special water transit service? from the Georgetown Waterfront."

-- there is ferry service to Governor's Island in New York City, although now the park is run by the city and a nonprofit conservancy, not the federal government. There is a charge, but trips before noon on Saturdays and Sundays are free.

-- the Thames River Heritage Park connecting Groton and New London, Connecticut on the opposite banks of the river has a seasonal water taxi service. operating on weekends in the summer and fall. It charges too, but connects many more destinations. 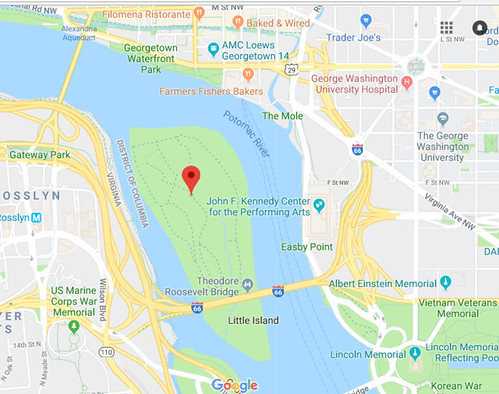 Along with their desire to create a gondola transportation link from Rosslyn to Georgetown, perhaps this is an initiative that the Georgetown Business Improvement District could take on, along with the NPS and the DC Department of Parks and Recreation.

It's less than 1,000 feet from the Georgetown Waterfront to Roosevelt Island, so an elaborate ferry isn't necessary.

======
I've suggested that DC needs a Rivers and Waterfronts Element in the Comprehensive Land Use Plan. Baring that, a water recreation element in the city's master parks and recreation plan.

This is the kind of item that would be identified and addressed as part of such plans.

There are docks at some of the parks assets along the Anacostia River.

If the city had a deeper tourism development and management plan, this item could be funded there too, from the tourism tax revenue stream.

-- "A gap in planning across agencies: Prioritizing park access for pedestrians, bicyclists and transit users compared to motor vehicle access," 2015

Note that there is an initiative to plan for better use of the C&O Canal, it focuses on that specific water asset only, not all of the water assets in Georgetown:

Speaking of tourism planning, it's also an illustration of the failure to have both a city-wide tourism plan as well as sub-city plans for districts like Capitol Hill, Dupont Circle, and Georgetown which have extra-normal opportunities for tourism development.