Last week, I wrote a piece ("Revisiting stories: cultural planning and the need for arts-based community development corporations as real estate operators") updating earlier writings with recommendations about discipline-specific planning for the arts.

You can make the same general points about all types of communities. 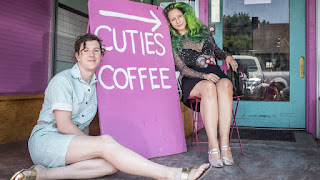 Cuties Coffee co-owners Virginia Bauman, left, and Iris Bainum-Houle, right, founded the shop a year ago as an LGBTQ community space. (Nick Agro / For The Times)

The Los Angeles Times has an article, "Can L.A.'s only LGBTQ-focused coffee shop survive?," about Cuties, a coffee shop in East Hollywood, and how financial difficulties threaten its continued existence.

Interestingly, it's not unlike the discussion about "rent metrics" and business models that I made in other pieces as cited in "New York Times special section: The Empty Storefronts of New York." The running costs for the coffee shop are $12,000/month including rent, labor, and supplies. They aren't generating that much revenue.

The article mentions Bluestockings bookstore and cafe in NYC, which is a collective, run on more of a volunteer basis, so that its labor costs are much lower. But the organizers don't want to do that, because they want to provide decent wages in a community where some find it hard to find decent jobs.

From a business model standpoint, Cuties needs to be open to other ways of organizing.  Especially if they want to survive.

(1) organize more like a membership group, with a monthly fee in addition to revenues generated by purchases;
(2) organize as a community co-operative/collective, with a mix of employees and member volunteers (food co-ops do this).


... the pair wanted to create a casual hangout that’s welcoming to all members of the LGBTQ community, regardless of age or gender identity.

Such spaces are scarce.

In most cities, the lion’s share of LGBTQ-centered establishments are bars and clubs that primarily cater to gay men who are cisgender, meaning their gender identity matches the sex they were assigned at birth. Greater L.A. is no exception. Although West Hollywood is nationally renowned as a mecca for gay men, that’s not necessarily the case for lesbians or transgender people.

Given this void, Cuties has quickly become the daytime darling of L.A.’s queer social ecosystem. But despite a loyal customer base, Cuties — the only LGBTQ-focused coffee shop in L.A. — is fighting to stay open.

Community planning for community maintenance.  It's possible to apply the same kind of approach I espouse in cultural planning to LGBTQ and ethnic communities.  From the LAT article:


The importance of casual gathering spaces for LGBTQ people should not be underestimated, even in a largely progressive city such as L.A., said Petra Doan, a professor of urban planning at Florida State University who studies the development and demise of LGBTQ neighborhoods.

“If you’re trans or a butch lesbian or a femme gay man, you’re going to have experiences of discrimination no matter how accepting in general California is,” said Doan, who is a transgender woman. As a tall person with a deep voice, she said she gets misgendered by every third or fourth person she meets.

“After a while, that begins to eat away at my sense of self,” Doan said, “and I need to spend time somewhere I can process and talk to people who understand what that’s like.”

Although I did write about this in April, "Community associations, centers and hubs: organizing at what scale." One of the examples in that piece is organizing to create an LGBTQ community hub in Austin, Texas.

As special communities become deconcentrated, extra-normal planning assistance to maintain the existence of community anchors, including businesses, is likely necessary.

This comes up a lot in terms of maintaining community culture and identity in the face of significant community change, such as that associated with the demographic changes that come from "gentrification."

Washington Post, Monday 10/22/2018, had a story on the opening of two new lesbian bars, commenting on the closure of another. A part of the article discusses the "community/supporting the community" element of having such places.