Ever since the failure of the City Museum around 2003, I have been paying close attention to cultural planning issues in DC, and I have written extensively about it.

In 2009, I was part of a panel at the national meeting of the Literary Managers and Dramturgs of America, speaking on the topic of "theatre and urban revitalization."  My presentation is captured in the blog entry, "Arts, culture districts and revitalization."

It makes a lot of points, distinguishing between arts as production and arts as consumption among others.  There are two major points.

The first is that artistic disciplines need to take the initiative in terms of making their own discipline-specific and -relevant plans. 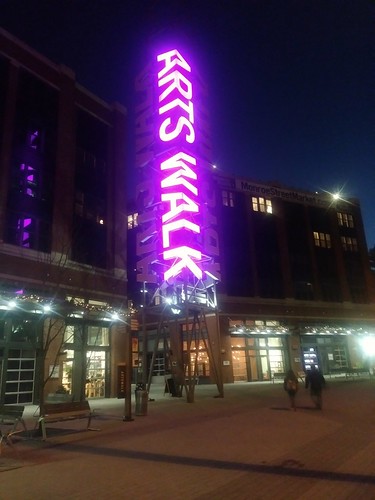 Arts Walk in Brookland at Monroe Street Market is a way to activate hard to market space as work-sales studios.

The second is that for a variety of reasons DC doesn't have the kinds of spaces--big old warehouses and industrial buildings--typical of manufacturing cities because it was never an industrial center, and even when those spaces do exist, because of the height limit on commercial property and the general demand for housing in an environment that is pretty low density, the pressure is on to convert such buildings to housing.

(... I remember talking with a major developer about trying to develop a joint venture to capture Hechts Warehouse (now the anchor of a redeveloping Ivy City District) c. 2005, for an arts, culture, and business incubator project and being informed that the building had just sold for something like $25 million (maybe it was more) to an out-of-state firm. That was one of the many events that educated me on the value of owning the properties.)

The 2009 blog entry/presentation made these five recommendations:

1. Create your own discipline-specific cultural plan
2. Come up with a sustainable facilities plan for your community
3. Create anchoring institutions
4. Networking-representing cultural interests at the scale of the community
5. Sharing Audiences

But I missed a sixth, which is equally important:

The Cleveland Public Theatre is the resident company in the rehabilitated Capitol Theatre in Gordon Square.

It's not like I didn't know this.  I've written plenty about the Playhouse Square Community Development Corporation in Cleveland and the Pittsburgh Cultural Trust ("The Howard and Lincoln Theatres: run them like the Pittsburgh Cultural Trust/Playhouse Square Cleveland model"), and other organizations like the Penn Avenue Arts Initiative in Pittsburgh or the Gordon Square Arts District in Cleveland, or very large cultural institution focused initiatives like that run by the Brooklyn Academy of Music.

1. Create an arts-focused community development corporation operating at the scale of the city (or county or region) to buy, hold, and develop arts properties
2. Create discipline-specific cultural plans (as part of an overarching plan)
3. Come up with a sustainable cultural facilities plan serving the community, artists, and specific disciplines
4. Create anchoring institutions for the arts generally and disciplines specifically
5. Networking with other disciplines to represent cultural interests at the scale of the community
6. Sharing Audiences between and across organizations

In 2016, I wrote a bunch of pieces out of the theme that all the hand wringing about arts displacement seemed to take people's eye off the prize--that they should be focusing on acquiring and holding buildings.

-- "BTMFBA: the best way to ward off artist or retail displacement is to buy the building"
-- "When BTMFBA isn't enough: keeping civic assets public through cy pres review"
-- "BTMFBA revisited: nonprofits and facilities planning and acquisition"
+ in 2017, "BTMFBA: Artists and Los Angeles" 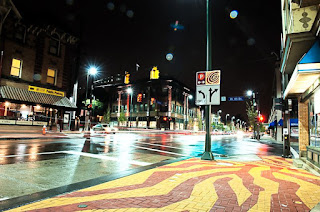 Painted sidewalks are one of the urban design/placemaking treatments in Gordon Square.  Pinterest photo.

Earlier this year, in my extensive comments on the draft DC Cultural Plan, which did have some decent discussion of the problems concerning space ownership and access but made either wrong-headed recommendations or none of real substance, I made this point, that the most important recommendation the plan could have made would be to create an organization to buy, hold, and develop spaces and facilities to support artists and artistic disciplines.

But the DC Cultural Plan does not make that recommendation.

Since the due date (February 28th) for comments there's been not a peep out of the Cultural Planning initiative.

Meanwhile, arts groups and artists, finding space costs too high in DC, continue to leave the city according to this week's Washington City Paper, "As Studios Close, Local Artists Look for Space."

All I can say is: 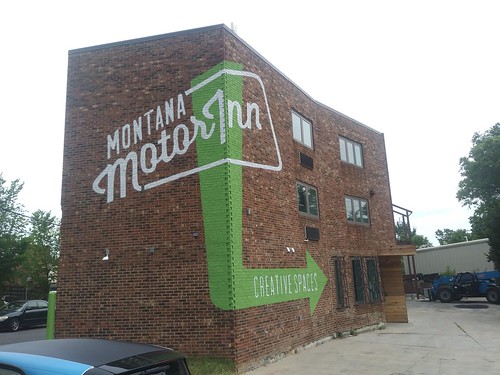 P.S. Trying to market out of the way poorly located buildings as great arts spaces isn't helping (photo at right).

Space at the Montana Motor Inn rents from $22 to $30 per square foot.

In terms of buying, holding and managing real estate permanently dedicated to cultural uses, no examples of arts-based “community development corporations” which buy and hold property, restore cultural facilities, run programs and/or lease space to other performing arts organizations are referenced. There are at least three such types. First, the multi-property initiatives of organizations such as the Pittsburgh Cultural Trust, Playhouse Square Foundation (Cleveland), the Brooklyn Academy of Music, and SEMAEST in Paris (the latter is more focused on providing retail spaces to creative endeavors rather than arts facilities).

Second, are multi-faceted cultural districts, usually managed by a coordinating organization comparable to a business improvement district, such as the Station North Arts District in Baltimore, and the aforementioned districts in Pittsburgh, Cleveland, and Brooklyn, as well as the Dallas Arts Public Improvement District. The smallish Penn Avenue Arts Initiative in Pittsburgh notably has facilitated the location of significant anchoring institutions such as the Pittsburgh Glass Center, the Kelly Strayhorn Theater, a 350-seat performance space, and the KST Alloy studios, two studio spaces suitable for rehearsals, classes, presentations, etc.

Third are one-off specific projects and facilities such as the Creative Alliance in the Highlandtown Arts District in Baltimore, which is housed in the former Patterson cinema building, various theater restoration efforts, projects by organizations which are members of the Nonprofit Centers Network, etc.

While focused on the development of affordable artist housing, the Jubilee Housing Corporation of Baltimore is a premier example of a local CDC doing multiple quality artist-focused housing developments.

By contrast, the arts housing in Brookland developed in association with DancePlace was actually created by and is owned by the national ArtSpace property development nonprofit. The project provided little in the way of capacity building for the development of similar projects elsewhere in the area independent of ArtSpace. (A failure to spawn local capacity and other projects was also true of the ArtSpace development in the Gateway Arts District in Mount Rainier.)

Recommending the creation of an cultural arts community development corporation for DC, based on the models of the Playhouse Square Corporation or Pittsburgh Cultural Trust, but operating at the scale of the entire city WOULD HAVE BEEN THE MOST IMPORTANT RECOMMENDATION THE PLAN COULD HAVE MADE. Note that while the city’s “Cultural Development Corporation” has a name that makes it appear to be a CDC, it is not. ARCH, a community development corporation based in Ward 8, did create and operates the Anacostia Art Center, but ARCH is not really an arts-focused CDC, and as an organization its purview is east of the river, not the entire city.

Similarly, a retail development program along the lines of SEMAEST could be another community development corporation kind of initiative. At the behest of the Paris local government, SEMAEST has been tasked with buying or controlling retail spaces on long term leases, and renting space at below market rates to unique retail endeavors such as a bookstore run by the University Press of France, specializing in on-demand printing of academic titles.

Takoma Arts Live is an organization (recently renamed), which functions like the PCT and Playhouse Square CDC, on a much smaller scale. They have three properties.