This week is Bike Week at the University of Utah

In the draft plan I did for Baltimore County, I did discuss specific measures to work with large organizations such as college campuses, to develop in systematic ways programs to support bike commuting, but discussion about programming and promoting cycling in specific ways was for the most part deleted from the plan.

During my time there I made a couple presentations at Towson University, and a few years ago, I served as a special lecturer for an online segment on bicycle and pedestrian planning for a course at the New School.  So I have some presentations on focused planning for bicycling at universities.

And while I have written from time to time about the need for focused transportation demand management planning at universities, one of the best ways to increase bike use at universities is to promote it.

In my assessment of where we are with bike planning ("Bike to Work Day as an opportunity to assess the state of bicycle planning: Part 1," 2017), recommendation #3 is:


In the DC area specifically, there needs to be greater focus on the opportunities to work with large employers, especially the federal government, and college campuses.

I did have a section on biking for transportation in the 2016 post, "Back to School #3: College."

The advantage of promoting biking to college students is that they are "impressionable" and it's a good time to develop sustainable behaviors as routine ("College towns of a certain size as an opportunity for sustainable mobility nirvana," 2018).

This leverages the interest that many universities and their students have in sustainability more generally.

-- Association for the Advancement of Sustainability in Higher Education

The university in Davis, California was a leader in promoting biking when it opened in the early 1960s ("Davis, California – the American city which fell in love with the bicycle," Guardian) and most University of California campuses are national leaders in transportation demand management.

A basic set of steps related to promoting biking on campus include: 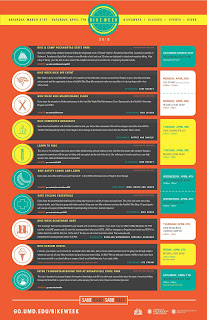 Schedule of events, Bike Week 2018 at the University of Maryland College Park (poster).

I think it was 2011, when I went to a Bike Day promotion at the University of Maryland College Park but it was in April, pretty much at the end of the school year.

To its credit, the UMCP has kept up and significantly expanded what they're doing to a full-fledged Bike Week.  But it's still in April, at the end of the school year, rather than in September.

Instead, cities should get universities to hold "Bike Week" or "Bike Expo" programs during the first month of school in the fall.

That's what the University of Utah does, where this week is Bike Week.  The campus is located uphill in Salt Lake City.  One of the events will be a bike expo this Thursday, which is something that should be part of a Bike Week promotional calendar at all college campuses.

Earlier in the year the University had a special promotion to provide discounts on purchases of electric bikes.  I'd argue that's a program that should be offered to staff especially on a year-round basis. 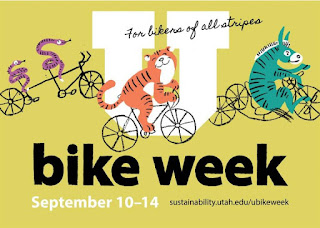 Interestingly, the SLC bicycle sharing program doesn't seem to be a sponsor of the University Bike Week.  Students are eligible for a discount of about 1/3.  Then again, there aren't any bike share stations at or near the University.  That's something that should be addressed as part of a wider range of bike planning there.

One cool thing about the B-cycle programs is that many of them offer cross-usage privileges without an additional fee.  That ought to be a member benefit attractive to college students, especially those visiting Denver and Boulder.

============
Davis, California as an important lesson for other college towns.  Davis was pathbreaking in that when the university campus was created, it didn't allow cars, and specifically promoted biking.  It led to the City of Davis becoming an equally committed proponent of bicycling("Davis, California - the American city which fell in love with the bicycle," Guardian).. 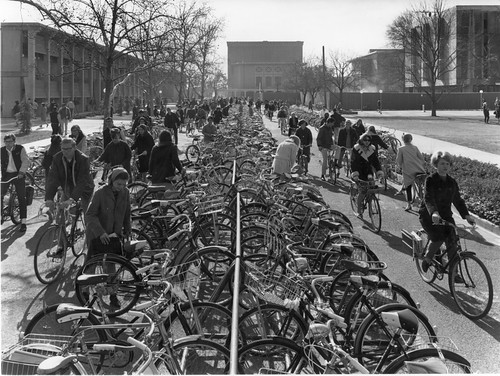 Bicycle racks at the University of California, Davis, 1963, by Ansel Adams


But this was in the period of widespread biking use, before automobility superseded other forms of mobility in the US.  Plus, because new student cohorts need to be educated and trained each year as other cohorts graduate, transportation demand management programming needs to be constant and rigorous rather than trickle down.

Over time, biking for transportation has significantly declined, both on the campus and in the city, and other cities, which developed more advanced practices, have leapfrogged Davis ("Fifty years of bicycle policy in Davis, CA," Ted Buehler).

The lesson is that promoting sustainable mobility practice needs to be constant.