I didn't write about it, but last Monday was the deadline to submit comments about WMATA's plans to go cashless on the limited stop bus services, to reduce dwell time, both from taking cash for fares or adding cash to a SmarTrip card, which is a cumbersome and time consuming process at the fare machine on the buses.

I answered the online survey and submitted a brief set of "comments."  Mostly the submission was photos of marketing by Transport for London about places where people can put money cash or credit on their Oyster cards, outside or or external to transit stations. 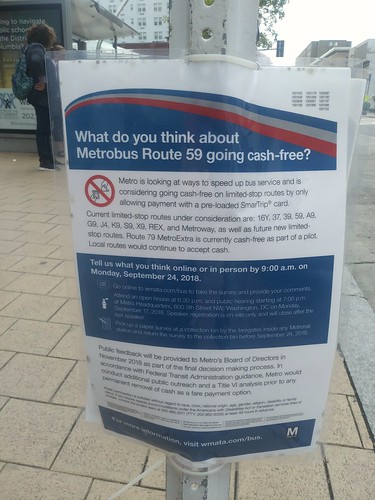 User experience.  While I support moving to cashless to speed up bus service, I argued that moving to cashless without having fare card machines outside of train stations and greater attention paid to  locations where riders can put money on their SmarTrip cards in more convenient ways does riders a disservice.  Access to farecard services outside of the Metrorail system is the primary point as it relates to "user experience."

Machines for buying Metrocards and adding money to them (either cash or credit) are only located within Metrorail stations. 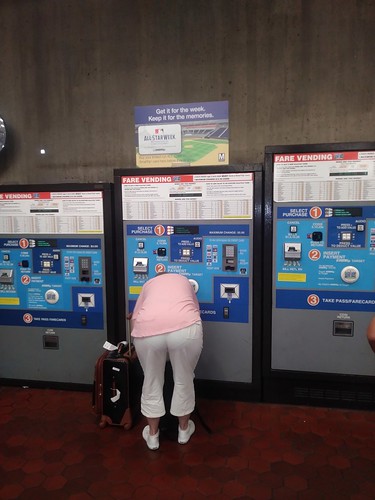 Farecard machines aren't present on the surface at major bus stops where lines intersect--although the big hulking machines could be replaced by smaller ATM-like machines for non-station locations. 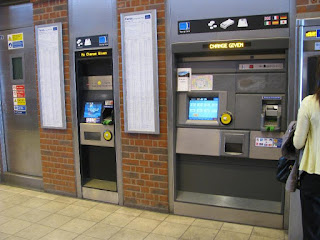 Note the the Transport for London ticket machine in the center of the picture above.  It's small enough to be able to be built into building facades, just like an ATM.  (One issue with stand-alone machines is security.  And admittedly, one issue with machines outside of Metrorail stations is the cost to service and operate them.)

Some retail stores service SmarTrip cards.  While there aren't WMATA fare machines outside of transit stations, it is possible to put money on cards at CVS Pharmacy, Giant Supermarkets, and Walmart stores, and certain other outlets.  Some sell the cards too (Giant, Walmart primarily).

It used to be that there was SmarTrip signage on some of the storefronts.  Even when present the materials aren't particularly noticeable.

Yesterday, I looked at the facades of five CVS stores in DC and Silver Spring, Maryland and didn't see any signage for the SmarTrip card program.  And Giant has a decal at the entryway stating all the non-grocery services they provide (selling stamps, etc.) and this decal does not list selling or adding money to SmarTrip cards.

Transport for London's marketing of off-transit Oyster card services.  That's why I submitted images from London.

Like this storefront in Hackney Borough on the Mare Street pedestrian mall, about one block from the Hackney Central London Overground Station.  Note the lighted sign reproductions of the Oyster card, communicating very clearly that the store offers Oyster-related services. 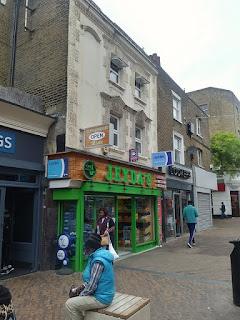 One of the marketing programs for off-site Oyster card money-adding services is called "Oyster Ticket Stop" and TfL provides a variety of graphic design treatments for affixing to storefronts. 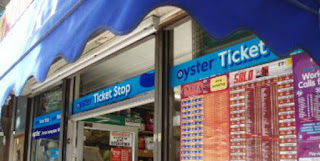 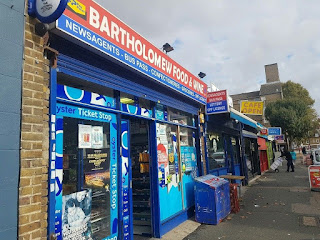 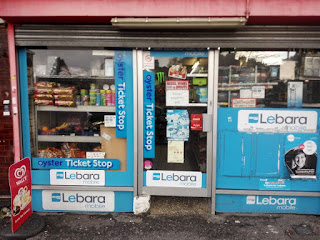 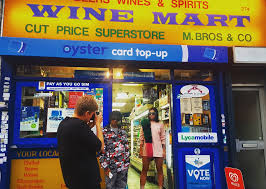 Other stores even provide walk up windows. 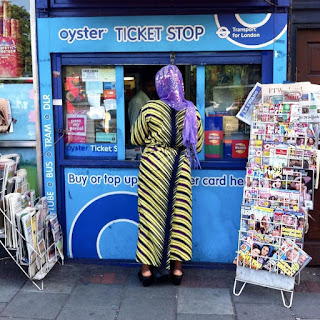 Note that these are independent stores, not chains, and chain stores, with their own brand design requirements aren't likely to go for the same treatment, which in the examples shown above, tend to be garish.

But it is possible to do something tasteful, such as this "Moneygram" sign posted in a window at a CVS store in Silver Spring. 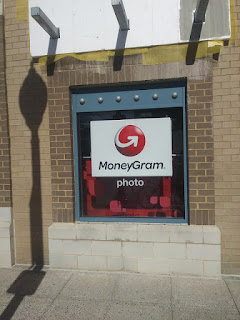 Oyster Ticket Stop sites incorporated into transit mapping.  Unfortunately, I forgot to mention in the submission that station wayfinding signage and area map brochures for London train stations stations also show the location of Oyster Ticket Stops.  I can't remember if this extends to the maps in bus shelters.  Ticket Stop locations are not included on the Legible London wayfinding signage system (Bus stops are indicated.) 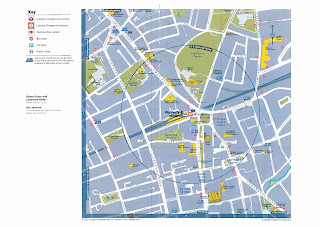 The ability to put money on fare cards outside of Metrorail stations needs to be heavily and creatively marketed.  One example is the "Orca To Go" program in Greater Seattle. 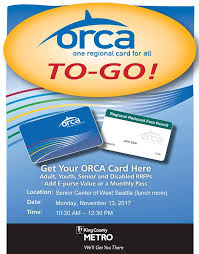 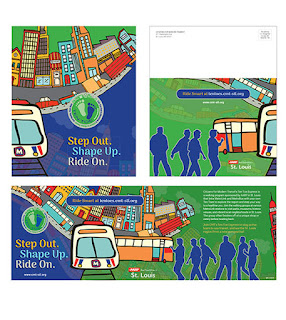 Transit marketing materials in St. Louis, by My House of Design 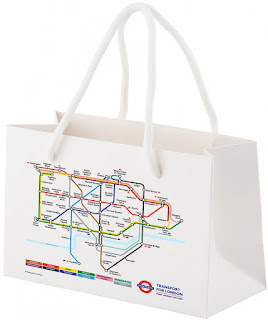 This bag is offered to retailers, with the map diagram of the London Underground on one side and the option to imprint store information on the other.

And this should include advertising within the transit system at stations and on buses and trains.

In the surface transit network, locations where SmarTrip cards can be purchased and/or serviced should be indicated on WMATA maps at bus shelters and in dedicated signage at bus stops.

Airports.  I neglected to mention that there should be farecard machines at the BWI and Dulles Airports, since both are served by Metrobus but without the ability to buy a farecard.  Although technically this isn't part of the proposed expansion of the cashless bus program, although it is related to the general question of ensuring access to SmarTrip cards at main points within the system.

Actually at BWI, since there is a light rail station there (I haven't used it, I'll check it out the next time I'm there), you could buy a CharmCard and use it on Metrobus because the CharmCard and SmarTrip cards are inter-operable, meaning they can be used on transit in either Baltimore or the Washington area.

But that element of the transit card isn't well marketed, e.g., at BWI Airport the transit fare card should be marketed as usable on both Washington and Baltimore local transit systems. 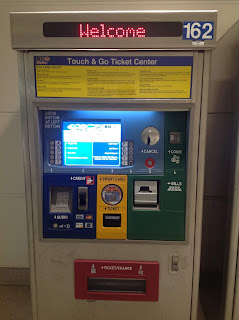 Still, the bus stops at BWI are located away from the light rail station and so additional fare card machines should be made available in the surface mobility service area.

Like what Montreal's transit system does.  The Trudeau Airport is served by bus but not rail.  They call the bus the "747." 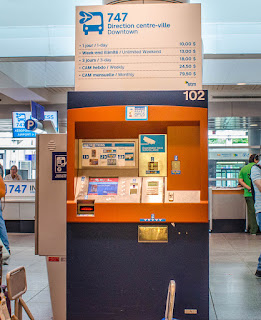 Of course, when the Dulles Metrorail station opens this won't be an issue any longer.

Its a good idea but WMATA won't be able to implement it because of the inability to conveniently add value to farecards. Simpler and more plentiful machines should be everywhere, but SmartTrip is too limited and WMATA can't maintain or manage anything. Even if you add value online, it can take days to show up. And as much as a drag as poor people are, I'm sympathetic enough to understand that planning ahead financially isn't their strong suit for various reasons. I've always thought buses should have a 2nd touch point rearward of the driver, so passengers could add fare or whatever during the ride instead of holding up boarding. For buses, I honestly think bringing back tokens would be a better idea. Just put them out as pseudo-currency and let the market figure it out. WMATA sure can't figure out anything.

I've never added money online. I didn't realize that it takes a long time to show up. I know that my one experience doing something like that, with the Orca card in Seattle, was similarly frustrating. It only is batch updated.

But I think the "instantaneous add" from a machine works pretty well.

Your idea of a second touchpoint on buses is excellent. But then so would fare machines on the surface.

===
but about machines and software, I was alluding to but didn't say. When I was in the process of writing this entry, I was thinking of the "President's Council" of transit agencies that created the standardized PCC car.

Why doesn't the APTA take the lead with transit agencies and develop standardized systems, in particular fare card machines.

WRT software, there are industry standards etc., but I don't understand why everyone needs to still have their own super specific implementation. E.g., that DC and Baltimore use the same card system is actually miraculous in the great scheme of things.

They should extend it to Virginia systems too, since the State of Virginia is a member of the compact.

Similarly, what Ontario did is a big thing too. It's complicated in Ottawa though because the suburbs are in Quebec and they don't participate.

I haven't done it in awhile, but even after you "add" it online, you have to "touch" the card within a certain period of time to "load" the money, else the transaction is cancelled. Aaand, the lag time is different between bus, rail, or other "touchpoints." So it is possible to add funds online, but then go to use it but the funds haven't transferred yet so you can't get through a fare gate (or more likely) pay bus fare. Its all annoying inconvenient and stupid. If you are a daily rider and your fare card has a cushion of value on it, its ok, but if you are an infrequent user it can be a pain. I can't blame the poor and luddites for wanting to stick with cash b/c if you have it in your hand at least you know its there.