A glaring illustration of the need for comprehensive health and wellness planning in DC: Providence Hospital

When I first started blogging in earnest in February 2005, there were five major hospital related issues in DC and the surrounding area:

(Later and successfully, Howard did the same as GWU and Georgetown, and their for profit manager-partner is doing a good job.  See "Howard University Hospital names new CEO," Washington Business Journal).

And wrt DC General, Greater Southeast, Howard, and Prince George's Hospital, regardless of being in DC or Maryland, I saw the issues as linked and all deriving from the same general issue of providing care, often un- or under-compensated, to impoverished populations.

-- "Prince George's County's problems as but one more example of the impact of outmigration," 2005
-- "More shenanigans in DC health planning," 2006
-- "Muddled thinking by Steven Pearlstein (Post business columnist," 2006
-- "An indication that there is little respect for planning: Maryland healthcare edition," 2011
-- "When the problem is defects in the structure of "the market", financial incentives won't do much good: Maryland's health enterprise zones," 2013 (this piece laid part of the groundwork for the 2018 series on UMC)
-- etc.

In this vein, in the Spring I wrote a series about DC's United Medical Center and how plans to build a new hospital could be leveraged for the delivery of transformative programs and outcomes:

Creating a healthcare planning framework.  But the reality is that there isn't comprehensive planning for health care generally and DC leadership typically isn't capable of initiating processes that can generate transformational projects.


Clearly, we need at least five different types of health care institutions based on scale/type of service:

b. Hospitals that aren't necessarily high level trauma care but have various specialty care foci (such as heart health or cancer);

c. Long term or specialty care centers like the Hospital for Sick Children or the National Rehabilitation Hospital or long term nursing care;

Ideally, regional and state health and wellness care plans would address each of these areas comprehensively, and facilities (for profit and nonprofit) would get the licenses to provide the care that is necessary.

That's not how it works though. There isn't a comprehensive plan--there is in some places, but not apparently in DC or Maryland.

Hospitals pursue licensing on their own, although the "certificate of need" process helps to manage the growth process. 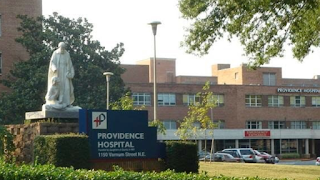 Imminent closure of Providence Hospital.  This comes up because the DC City Council is concerned about plans to close Providence Hospital and is in the process of passing legislation aimed at keeping the hospital open ("D.C. Council bill would require Providence hospital to get approval before closing," Washington Business Journal).  From the article:


The temporary measure would amend 1996 legislation to say that the State Health Planning and Development Agency, which handles D.C.’s Certificate of Need process to approve facility openings and expansions, would also have the authority to approve or disapprove these types of closures. ...

The city's Health Department received official notification Sept. 14 from St. Louis-based Ascension Health, the Catholic nonprofit owner of Providence hospital, of its intention to end acute care and emergency room services by the end of this year, according to D.C. Health Director LaQuandra Nesbitt, who testified at the hearing Wednesday.

The hospital has been shutting programs and putting out alternatives for the last couple years, such as for conversion to a health campus less focused on the use of in-patient services ("'Health Village' Proposal Sparks Discussion in D.C.," Hospital and Health Networks).

Changing the health care planning process to address closures.  FWIW, the proposed revision of the hospital planning process is a good thing, and should be made permanent because it creates a process that engages the city and health planners (if we have any) and creates the opportunity for extra-normal intervention when warranted.

But for this to work, you need a systematic and comprehensive plan and needs assessment. Likely, DC "has enough" hospitals, even if the overall lack of a "system" for health and wellness care has many gaps.

What to do? I can't claim to know what should be the outcome for Providence Hospital.  And note that while they want to cease "hospital services" they still have plans to deliver health care services at that site ("Here’s the latest on Providence hospital’s upcoming closure in D.C.," in line with the previously announced "Health Village" concept.

Changes in the way hospitals do business and deliver care.  Healthcare is shifting from in-hospital care and focus on patient beds to non-in-patient care, reduction in the number of beds, a shift to very specialized services, private rooms, etc.

As an industry, there is a lot of consolidation, including more and more combining of smaller health care systems into larger entities.

(Fortunately, I haven't spent much time in hospitals in the last 30 years, but last year I spent a fair amount of time at Holy Cross Hospital and later a nursing home in DC and was amazed at how the delivery and treatment of in-patients has changed, especially in a relatively new facility like Holy Cross.)

In the area outside of DC there are plenty of other hospitals, the large Inova System in Virginia, the Dimensions system in Prince George's County, Holy Cross in Montgomery County, Washington Adventist in Montgomery County which is moving from Takoma Park to White Oak, etc.

Locational factors.  Like Washington Adventist Hospital, which found its out-of-the-way location in Takoma Park to be a hindrance to wider usage as well as being less well placed vis a vis a larger market for health care services, Providence Hospital is in an out of way location and unable to grow.

Need for significant investment.  The Providence Hospital facilities are old and in need of significant investment to be able to compete with other hospitals for higher income patients.  And, like with the proposal for UMC, hospitals generally are getting smaller in terms of in-patient care and the number of beds, shifting to private rooms, etc.

Georgetown is getting a big investment of close to $600 million ("MedStar Georgetown Construction to Begin January 2018," Georgetown Hoya). A new PG Hospital is being built with 205 beds at $543 million (WBJ).  Sibley has been expanded to the tune of $280 million in new investments (WBJ).  DC is planning on building a new UMC.  Washington Adventist is building a new hospital in White Oak, which is about 7.6 miles away.

Maybe it's a bad fit for Ascension but not for other nonprofit hospital groups?  In the context of "health care chains" either for profit or nonprofit, in terms of making investment decisions, Providence is owned by Ascension Health Systems, which is mostly based in the Midwest, with only two properties--Providence in DC and St. Agnes in Baltimore--in the region.

Perhaps another religious-infused nonprofit health care firm would take it off their hands, e.g., Holy Cross Hospitals in Montgomery County are owned by Trinity Healthcare, or Bon Secours Mercy Health, which has facilities in Maryland and Virginia.  But they'd have to see upside in doing so.

The lost opportunity of creating an affiliated medical school at Catholic University.  A long time ago either or both Providence and Washington Hospital Center should have reached out to CUA about creating a Medical School, which could have linked with either or both hospitals.  Now though, CUA is experiencing a range of financial and management troubles and isn't in a position to grow.

The New Yorker: The Death of Hahnemann Hospital.
https://www.newyorker.com/magazine/2021/06/07/the-death-of-hahnemann-hospital