Modeled after the "Doors Open" cultural events in many cities, to promote the construction industry and careers in construction, the Build UK trade association created Open Doors Week, where people can get behind the scenes tours of active construction sites.

This year it is from Monday March 18th to Saturday March 23rd.

One of the participating sites is Glasgow Queen Street train station, which is being expanded.  The project includes lengthening of platforms to accommodate longer trains and improvements to station entrances and concourses to handle larger numbers of riders. 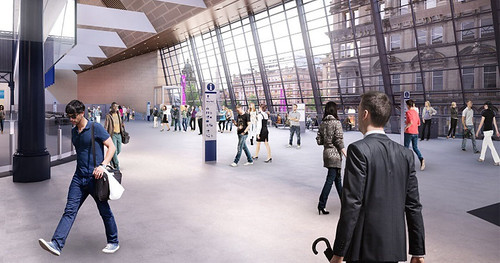 Rendering: The new station will feature a glass frontage with improved, fully accessible entrances on Dundas Street and George Square.


From 21-23 March, groups of up to 20 people will have the unique opportunity to enter the live worksite and watch as Glasgow Queen Street is transformed from behind the hoardings. The station is undergoing a significant redevelopment to build extended platforms for longer trains of up to eight carriages and a new spacious concourse with glass frontage.

Although sadly for us, it's fully booked.  So is the tour of the reconstruction of the Covent Garden (Wholesale) Market.

Another site is the refurbishment of the London Underground Terminal 3 subway station, which still has availability.  Or a behinds the scene tour of the Surrey Street Lighting project in London, which has replacled thousands of streetlights with LEDs, and is now in the maintenance phase.  Attendees will get to talk with electrical engineers about how the system is managed and maintained.  Or for preservationists, the reconstruction of the Church of Ascension in Salford, which was destroyed in an arson attack.

=====
As part of its programming, the National Building Museum often has offered similar kinds of tours. But the UK program is national.