Probably at least half the comments on the previously cited Washington Post article, "Long before the World Series, this ragtag group of D.C. property owners was evicted to make way for baseball," criticized the Post for being "negative," stating that the Post should only be positive on the eve of the third World Series game.

Here are some of the urban planning lessons I've learned from the Washington Nationals (and the MCI Center/Verizon Center/Capital One Arena).

1.  Siting, urban design, and transportation connections are fundamental.  DC is a great example for cities (as are NYC, New Jersey, Boston, and Philadelphia, and White Sox vs. Wrigley Field in Chicago) on right siting and wrong siting for sports facilities, and how this makes a difference in positive ancillary economic development.

RFK Stadium has a subway station, but it isn't centrally located and the site was never designed to spur additional development.  The old Uline Arena, home to hockey and basketball teams, lacked good transit access.  Capital One Arena is served by three Metrorail lines and is 4 blocks from the other three lines.  Nationals Stadium is served by one Metrorail line and many people go there by car, leading to terrible congestion.

Capitol One Arena and Nationals Stadium anchor districts beyond the four walls of the facility.  Even though both Nationals Stadium and the Arena are modern buildings, counter to the "throwback" designs of Camden Yards, they fit in with their surroundings.  Most importantly, they are designed for the city, not surrounded by parking lots. 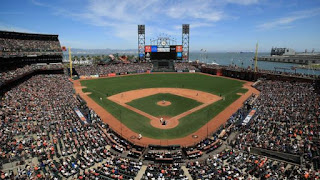 John King, urban design writer for the San Francisco Chronicle, in his 2003 article on PacBell Park, "Opening Day Distraction / Why the ballpark was a great idea, four years later," laid out the lessons from that facility.   From the article:


In short, Pac Bell Park is a brick-paneled seminar on urbanity. Let us study the lessons taught by this one really smart - but so gosh-darn cute! - building." The lessons are:

His review of the baseball stadium for the San Diego Padres ("Petco Park top-notch -- but no splash hit / San Diego's new stadium evokes Aztec ruins more than baseball") provides the counter lessons on what not to do.

2.  While it's important to oppose public financing and giveaways to owners and leagues, given the likelihood such rewards will be provided to sports teams, we need to focus equally on maximizing positive urban design, transportation demand management, and other community benefits from the facility.  These pieces outline a framework for what to look for.

3.  The relationship between a team and a jurisdiction should be a partnership, but it's very one-sided.  Be sure you specify what you want in the contract.  A locality has maximum leverage is before the contract is signed.  Provisions not included in the original contract are unlikely to ever be added because the team won't want to do anything that costs extra.

-- "Everything they do centers on cash (sports-related economic development)" (2006)
-- "Brief follow up on DC and a new football stadium for the Redskins" (2018)
-- "Yes, modify and extend the RFK Campus lease; No, don't do it for the Washington Redskins football team" (2018)
-- "Been to Largo lately? Sports teams often aren't very good partners..." (2018)
-- "Protecting local government interests: Jurisdictions at risk from slimy sports teams owners and the Miami Marlins as an example" (2018)

The baseball team owners are okay.  But being better than the owner of the Washington Redskins football team isn't the standard we're looking to exceed.  Mostly team owners are looking out for their own interests and the Lerners are no exception ("The problem with Ted Lerner's lifetime achievement award," Washington Post),  They aren't going to give up anything they aren't required to by contract.

And local jurisdictions paying for facilities need to be able to better benefit economically from providing the platform.  That means a kind of virtual ownership interest that gets monetized each time the team is sold.

-- "New Year's Post #3: More thinking on "return on investment" from different types of sports facilities and DC, and an Olympics in DC" (2015)
-- "Stadiums and arenas as the enabling infrastructure for "money-making" platforms " (2014)
-- "Protecting local government interests: Jurisdictions at risk from slimy sports teams owners and the Miami Marlins as an example" (2018)

5.  But despite my arguments that given the strength of the market, development would have happened even without the Capital One Arena or the Nationals Stadium, that undersells the economic value of such facilities as anchors, draws, and destinations.  I'm half right, but half wrong, maybe even 60% wrong.

It took me many years to accept the positive impact of the now named Capital One Arena on the success of Downtown Washington. While I still believe that I am right that the area would have revitalized eventually (and actually there are success problems with the development still today, 21 years later, because of problems with the urban design) there is no question that it:

(2) draws and re-introduces suburban residents of the metropolitan area to the city, and contributes more positively to the image of DC within the metropolitan landscape for commerce and residential choice

(3) Economic analyses showing no impact from sports teams are done at the metropolitan scale, and under-report the impact of appropriately sited, designed, and integrated facilities in urban settings.

In short, center cities may do better with stadiums and arenas, which draw spending from elsewhere within the metropolitan area. 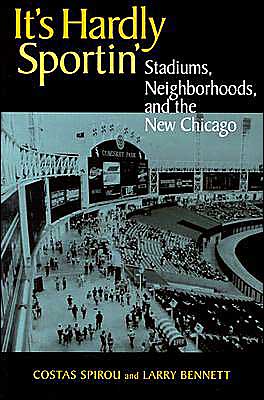 6.  Entertainment districts aren't great for retail.  In all the discussion about mixed use around stadiums and arenas, the reality is that it's great for restaurants and nightlife, and not for retail outside of sports team related merchandise.

It's also related to the increased interest in "buying" experiences but not things.

People aren't really interested in buying stuff that they have to carry around, bring into the stadium etc. (although a store could offer delivery as a way to spark sales).

Retailers in the Navy Yard/Ballpark District or The Wharf will sputter for the most part, except when they are convenience retail (like groceries) offered primarily to residents.

But we should have realized this earlier, Costa Spiro and Larry Bennett, authors of It's Hardly Sportin': Stadiums, Neighborhoods, and the New Chicago, about adding lighting to Wrigley Field in Chicago describe how the Wrigleyville commercial district was reproduced into an entertainment district complementing Cubs games.

It doesn't help that games may be scheduled to start at times that discourage attendees from going anywhere else to consume food and drink before games.

7.  Get it in writing: Put transportation demand management requirements in the contract.  The Lerners continue to refuse to pay to extend transit service hours in the event games go beyond closing time.

BTW, the Chicago Cubs are required to do transportation management planning as a part of their use permit. Having arenas on top of train-subway stations like Madison Square Garden and Barclays Center means that a majority of attendees end up using transit. It would be useful to have such data for the Capital One Arena.

MTA in Greater New York, Metrolink in Southern California, and other railroad passenger systems do a wide variety of marketing promotions to encourage attendees to use trains to get to and from games. 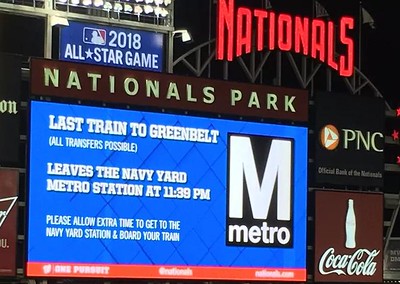 -- "Integrating citizen residents into "business" improvement districts: Capital Riverfront district as an opportunity and example of the need for change" (2014) 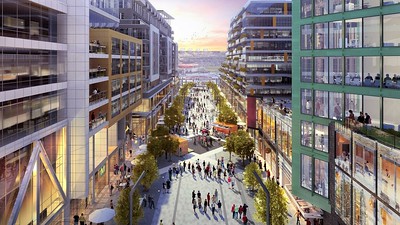 9. Look to make long term urban design and transportation improvements at the outset. With regard to the Nationals Stadium, it's been ten years since the stadium opened, but significant urban design improvements for Half Street SE, the street that leads from the Navy Yard Metrorail Station to the Ballpark, are still in process and won't be completed before the All Star game.

-- "Developers plan a pedestrian-friendly 'gateway' on the road to Nats Park," Washington Business Journal
-- "Urban design considerations for the area around Washington Nationals Baseball Stadium in advance of the 2018 All-Star Game" (2017)
-- "Sadly, DC won't show so well during the Baseball All-Star Game" (2018)

Another element would be to build an "underground" connection between Metro Center and Gallery Place, to encourage people to walk between the two stations, rather than to ride the Red Line subway for one stop.  NYC, Chicago, and Montreal provide examples for how that could still be done. The Minneapolis Skywalk system is another example.

-- Urban Design Manhattan, Regional Plan Association (1969)
-- "Hong Kong needs to create a formal and planned pedestrian mobility network (2016)
-- "Public improvement districts ought to be created as part of transit station development process: the east side of NoMA station as an example" (2016)

10.  There was inadequate concern about retaining desirable businesses displaced by the ballpark.  Some of the businesses were light industrial, arts related, etc., that employed people, provided facilities to pursue creative endeavors, etc.  But because they were industrial zoned, the supply of such spaces and buildings in DC is limited, and therefore the spaces at current costs are highly expensive, most of these businesses were either pushed out of DC and/or ceased to operate.

There should have been more efforts made on retaining these businesses.

11.  DC can't assess income taxes against the incomes of home team or visiting players, while other cities/states do so.  One of the elements of figuring out the economic value of sports subsidies is the income tax revenues that come from players.  Because it's held that players "only earn income" when they play in a contest, both home and visiting team players end up having to pay taxes to the place where the match is held.

But Congress forbids DC to levy income taxes on nonresidents and that ends up being a side benefit for professional sports teams.

=======
But yes, even though I am not that interested in team sports, I have been watching Washington Nationals baseball games in the post-season.

There are competing leagues, mostly in much smaller cities, for the most part west of the Mississippi River.

and another centered on the East Coast, mostly but not entirely present in small towns.

There are probably contract provisions precluding it, but were I Monumental Sports, I'd hedge my bets and go with the NAL, to keep that platform humming in the months without traditional basketball and hockey.

good article on the potential for baseball expansion.

article in the NYT on the 25th anniversary of the Major League Soccer league and the way it differs from other business models for organizing professional sports.

2. Story about the new soccer team in St. Louis and what they're dealing with right now: