Step Streets and pedestrian (and biking) networks beyond street side sidewalks

The movie, "The Joker" has brought attention to a public stairway in the Bronx  ("'Joker' Stairs Become a Bronx Tourist Draw. Hope You're in Shape," New York Times).

Apparently the Bronx, like Berkeley, California ("Book details secret staircases of Berkeley and Oakland," Berkeleyside), has a number of public staircases providing footway connections between streets, because of the hilly topography.

This stairway between Shakespeare and Jerome Avenues is featured in the movie.

Wanting to get an image of it, I came across a thread ("Step Streets") in Wired New York, which references a 2002 New York Times article, "Afoot in Stepstreet Land," along with multiple photos and reprints other newspaper articles not always sourced.

One of the images in the Wired New York thread, from a DNAInfo article, is of a fabulous horizontal staircase connecting Teller and Clay Avenues at 168th Street.

The street sign for the walk way, in a somewhat joking way referred to as 6 1/2 Avenue as it is between 6th and 7th Avenues, has an marking on the bottom denoting it as an "arcade." 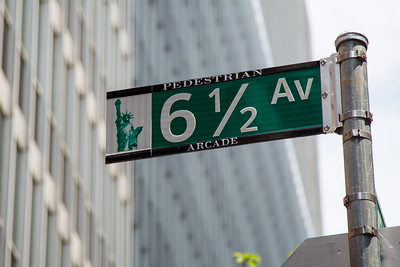 (This reminds me of how I suggested that trails be treated as streets for map and signage purposes, following the addressing conventions of the DC city street grid.)

Anyway, in "Further updates to the Sustainable Mobility Platform Framework," I argue that a robust typology for sustainable mobility framework needs to include public staircases, elevators, and escalators as an element.

Some cities, notably Chicago, Toronto, and Montreal, have a different wrinkle, with public underground walkway networks, usually in dense places making connections between buildings and transit stations, while Minneapolis and St. Paul have skywalk networks providing connections between buildings so that people don't have to go to the ground floor and then back out and up to get where they want to go. 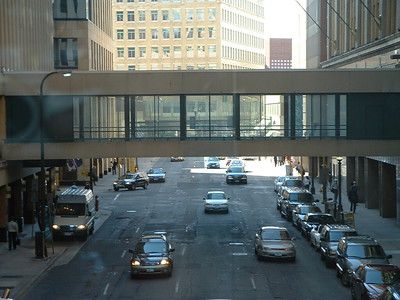 One problem with these networks is that most of the walking space is provided by the private sector and there can be inadequate coordination between all the players in terms of planning for a complete network as well as wayfinding signage systems.  There are various efforts in Chicago, Toronto, and St. Paul to address this.

In Chicago, the Environmental Law and Policy Center is spearheading the "Revitalizing the Chicago Pedway" project, with a report and workshops.  There's been a lot of media coverage in the local papers, etc.

Public elevators are common in cities on the French Riviera, but also in other places. Hong Kong is known for public escalators. Medellin has added stairways, public escalators and cable cars as a way to provide connections for communities in hilly and mountainous areas, etc.

The point is that planning for pedestrian mobility needs to consider not just the horizontal dimension but also the vertical ("(In many places) Public improvement districts ought to be created as part of transit station development process: the east side of NoMA station as an example" and "Hong Kong needs to create a formal and planned pedestrian mobility network).

While cited in blog entries, the Regional Plan Association's Urban Design Manhattan report (1969) is a particularly good introduction to thinking about these issues in both vertical and horizontal dimensions.

Biking.  The same is true for biking in terms of deploying special infrastructure to make connections in areas with severe access challenges like rivers, highways, and topography.

Bridges, tunnels and switchbacks are the typical access treatments.  The DC area has a number of bicycle and pedestrian sidepaths on bridges crossing the Potomac River and elsewhere across highways.

However, recently to save money but after one of Maryland Governor Hogan's first acts in 2015 was to cut tolls ("Maryland cuts tolls on Bay Bridge, ICC and other roadways," Washington Post), they've elminated a sidepath for bicyclists and pedestrians from the plans to replace the Nice Bridge connecting Maryland and Virginia across the Potomac River ("Maryland approves narrower Nice Bridge replacement option," WTOP radio). From the WTOP article:


Local and regional leaders had pushed Maryland to include an originally promised bike and pedestrian path as part of the bridge, but the MDTA board led by Transportation Secretary Pete Rahn voted against that proposal Thursday at a meeting in Baltimore.

Under the selected bid, the path would have added $64 million to the cost.

This is but one of many examples of the cost of political pandering to sustainable mobility, in particular biking, walking, and transit.

Bicycle Lift/CycloCable.  The rarest form of bicycle assistance through infrastructure is the Trampe Bicycle Lift (now called CycloCable) which has been deployed in one city in the world in Norway as a way to "lift" people up a steep hill ("This Bike Elevator Makes Steep Hills a Little More Manageable," CityLab).

(I definitely could see something like this in Salt Lake, although not only have I identified a couple streets that are somewhat out of the way but easily ridden, I can bike the hill up 1300 South without walking, although not the very first time I tried, at night and when I was tired...).