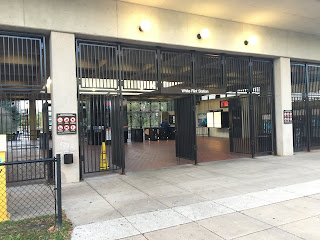 An email blast from the Friends of White Flint organization says: "Tell WMATA You Want Them to Pay for a 2nd Metro Entrance at White Flint." From the message:


A second entrance for the White Flint Metro station is critical so the Pike District can continue its transformation into a walkable, transit-oriented, vibrant community. Montgomery County has officially asked WMATA to pay for this station, which has a price tag of $36 million.

MCDOT has asked all of us to tell WMATA that this station is important to our community. Not only will this new station entrance increase the walkshed and spur economic development, it will also dramatically increase passenger safety, enabling riders to evacuate the station almost twice as quickly in case of emergency.

My response is the system is built out, if this is that important and valuable, pay for it yourself.

By "yourself" I mean Montgomery County and/or the business district served by the transit station.  As part of the massive redevelopment of the "Pike District," for which Friends of White Flint is the primary coordination organization.

DC did something like this for the creation of the NoMA infill Metrorail station on the Red Line when they created a special purpose funding district to pay for the station, alongside contributions from the city government and the federal government.

But it turns out that the NoMA funding district was designed too narrowly, only to build the station the way it was originally designed, not to continue to fund improvements to that station, as needs changed, specifically better connections from the east side of the station, whereas the station was mostly focused to the west.

In response I wrote a post, "(In many places) Public improvement districts ought to be created as part of transit station development process: the east side of NoMA station as an example," making the point that:

(1) horizontal and vertical connections to transit stations need to be planned for robustly and updated as necessary; and

(2) to pay for it jurisdictions should create a system of "public improvement districts" that are ongoing funding sources not just for a particular improvement and nothing else, but for improvements more generally.

That's what White Flint/Montgomery County needs to do.

A PID can fund multiple improvements.  And such a funding district could pay for other improvements too, such as the needed infill MARC train station (see item #6, "Setting the stage for the Purple Line light rail line to be an overwhelming success: Part 2 | proposed parallel improvements across the transit network"), and other access improvements like improved biking accommodations, streetscape improvements etc.

This is what they want Rockville Pike to look like. 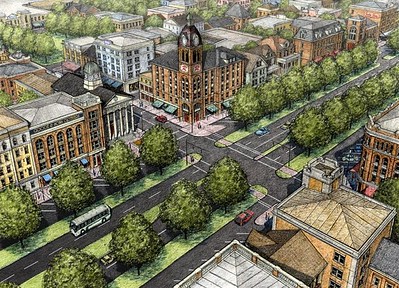 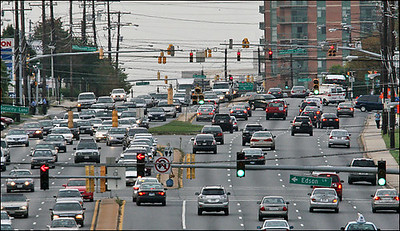 Alternatively, Montgomery County could create a "transportation renewal district" or PID for the entire Metrorail Red Line in the county, and use it overall to fund improvements to the various Metrorail stations. 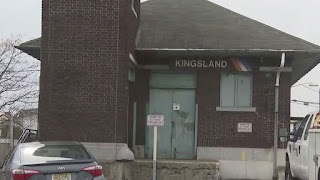 Lyndhurst, NJ.  I had been thinking about something similar for New Jersey communities served by NJ Transit.

Justifiably, there are complaints in the community of Lyndhurst about the poor quality of train stations in their city--NJT has a plan to build a new station and replace and close the Kingsland and Lyndhurst stations, but at the present it is unfunded ("NJ Transit Commuters Frustrated By State Of Lyndhurst Train Stations," CBS New York).

But given the state of underfunding of the NJ Transit system ("NJ Transit needs a new funding model, Governor | Editorial," Newark Star-Ledger: NJ Transit to divert $511M from capital funds to pay for operating costs, POLITICO) it will be at least a decade before they get to this particular need.

Conclusion.  If it's a priority, and you want to move ahead of other higher rated capital projects, jurisdictions should be expected to come up with some of the funding.

Especially, because in the case of the White Flint station, it is so minimally used.

Create a special funding district -- a public improvement district or a transportation renewal district -- as a funding mechanism, to build your desired transit station access improvements.

The PID concept is fine, but this seems absurdly complex. The solution is simple: MoCo should just fund it. And they did, until the County Exec removed the item from the budget.

WMATA should also want to fund and build these entrances, too. Particularly the White Flint case, where the construction is easy and the benefits huge.

so few riders... WMATA should prioritize capital improvements like this.

It matters more to MoCo and White Flint, they should fund it.

Building one of the exits at the infill Potomac Yard station in Alexandria was dropped because of cost. They didn't have a PID in place.

But as part of the investments to attract Amazon HQ2, an agreement to add the previously dropped entrance was included.