(More) People on streets and the coronavirus 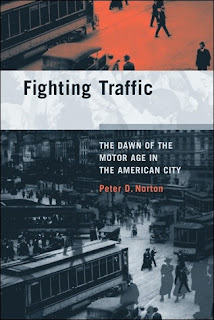 The longstanding tension between urban and pedestrian/sustainable mobility policies and practices and more automobile-centric practices come to a head in the allocation of space for pedestrians versus cars.

For the most part, in most places, the car wins in terms of road space versus walking space, especially when you include on-street space for parking.

The car also wins in terms of deference.  A few years ago I was crossing from one side of my street to the other, and I waited for a car to pass, and for the first time I thought "shouldn't the car be deferring to the pedestrians and not the other way around?"

How this situation came to be is discussed in many books and papers, including Peter Norton's Fighting Traffic: The Dawn of the Motor Age in the American City.

With so many people being home bound as a way to reduce infection from the coronavirus, more cities are aiming to shift street space to pedestrian space. 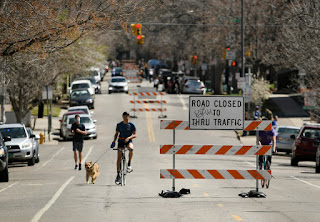 Cyclists, runners and others take advantage of street closures to ride, walk and run along East 11th avenue on April 5, 2020 in Denver. Starting Saturday, several streets in Denver were closed to through traffic. The goal is to create more space for Denver residents to walk, bike and run while complying with physical distancing requirements.  Photo: Helen Richardson, Denver Post.

Denver isn't banning cars.  The streets are more "shared spaces," which in normal times scares the hell out of me because the privileging of automobile traffic is so ingrained that it's difficult for drivers to concede to the pedestrian or bicyclist.  From the article:


Escudero said that’s easier said than done, as the closures still permit vehicular access for residents and those carrying out essential business activities like food delivery.

“People in cars are urged to go very slowly and use extreme caution on these shared streets,” he said. “We’re adding signage this week to reinforce that message and further educate people to hopefully prevent the need for additional enforcement.”

Jill Locantore, the executive director of the Denver Streets Partnership, helped spearhead the street closure effort after her organization found in a survey of 1,400 Denver residents that they reported walking and biking more since the pandemic hit the city last month.

She said the first three closures constitute around three miles of roadway, but more road are coming in the next few days to make other parts of the city more pedestrian-friendly as well.

“There are not enough safe spaces to walk or bike while creating that physical distance,” said Locantore, a resident of the City Park West neighborhood. “We’ve got 5,000 miles of streets in Denver. It seems like it’s not too much to ask to have this set aside for the people.”

Salt Lake is planning to do it ("Salt Lake City creates survey to decide which streets to open up for pedestrians, cyclists," KSL-TV), and DC did a bit ("Pressure grows on D.C. to close roads to give residents more room for walking, jogging, biking during covid-19 shutdown," Washington Post).

DC closed some roads within parks, but hasn't moved to go beyond parks and shift any regular streets. 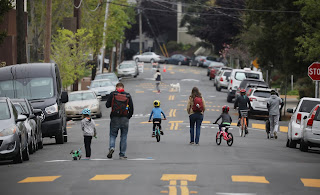 Oakland, Calif., began closing streets to through traffic on Saturday to make it easier for residents to maintain a safe distance while outside.Credit: Jim Wilson/The New York Times.

It's unfortunate with these efforts that cities can't provide programming like the CicLAvia in Los Angeles County or the general resources from the Open Streets Project but programming presupposes people congregating.

(Ciclavia gets 100,000 to 150,000 people out for their single day programs, which move around to different places in Los Angeles County, helped with primary sponsorship by the county transportation authority.)

DC rebooted its own version of open streets programs last October, when it shut down a long stretch of Georgia Avenue (although the city falsely declared this was the first time, conveniently ignoring a couple times in the past which weren't particularly successful).

There are sections of streets, like Massachusetts Avenue, that could be closed, in ways that would have minimal negative effects.  I've made that point for not quite ten years...

There are many articles now about "how the pandemic will change things going forward." I am not so optimistic to believe that more people will take up sustainable transportation modes--walking, biking, and transit--going forward. Definitely transit has a knock because in a high use system, transit vehicles are congested with people, and in a pandemic-conscious world, you want to keep your distance. 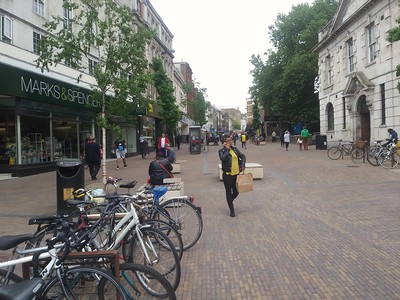 The Mare Street/Narrow Way pedestrian zone in the London borough of Hackney looks like it's been there for decades, but it's actually a relatively recent creation.  It anchors a pedestrian district there near the Hackney Central London Overground station.

But will more people walk and bike after social distancing orders are reversed?  From the NYT article:


Samuel I. Schwartz, a consultant and former New York City traffic commissioner known as Gridlock Sam for his traffic-curbing efforts, supports the idea of car-free zones in the city.

“There is no more important resource in New York City and in all the dense cities after people than space,” he said on Saturday. “And cities are now dedicating 30 to 40 percent of their land areas to cars. This could be a welcomed reclamation movement.”

In any case, I do hope that more places will look for opportunities to increase the amount of public space dedicated to people rather than cars, and for the development and expansion of pedestrianized spaces.

Such as how I outlined could be for:
Conclusion: can we move from ad hoc to systemic initiatives?  The best "takeaway" from these efforts would be a shift to one-off projects and towards a more systemic, structural, and ongoing program for rebalancing space between automobile traffic and sustainable mobility. 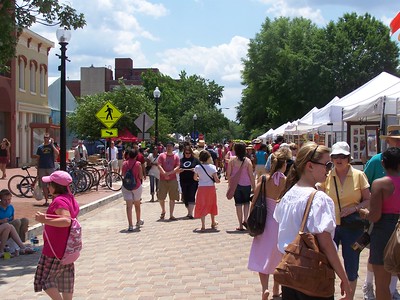