National Bike Month | Will the coronavirus result in a longer term shift to bicycling for transportation? 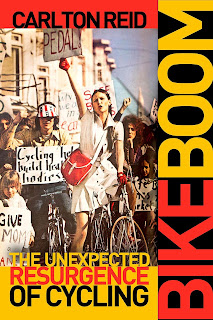 There is a condensation ("Bicycling Booms During Lockdown—But There's A Warning From History") from UK-based Carlton Reid's book published by Island Press, Bike Boom, in Forbes.

Reid has published two volumes of a three part series looking at the fall, rise, and fall in biking from the beginning of bicycling to the current period.

The books are important for providing a historical perspective on biking for transportation. Bike Boom focuses especially on the 1950s to the 1970s and is quite illuminating.

Much of the infrastructure we advocate for today, like separated cycletracks, was part of the discussion in the 1970s, spurred by:

(2) an increased interest in environmentalism, such as the first Earth Day in 1970

(3) the "energy crisis," when Mideast oil producing nations reduced production as a way to punish the West for its support of Israel and a concomitant rise in the cost of oil.

Countries like the Netherlands and Denmark took the "energy crisis" as a signal that they were overreliant on automobiles and gasoline and therefore highly vulnerable and began shifting their  transportation policy towards what we now call sustainable mobility--walking, biking, and transit.

In the US, there was a period of interest sparked by the energy crisis, and a response by the but it wasn't sustained, as oil supplies increased again, and prices stabilized.

But the headline of the excerpt in Forbes is misleading, as there is no discussion about a current rise in bicycling, although this Associated Press Europe story, "Cycle power: Bikes emerge as a post-lockdown commuter option," indicates that there may be more people cycling for transportation now as a result of shutdowns.

Given the likelihood of low gasoline prices persisting for some time, and social distancing practices likely to be maintained in response to the pandemic, therefore reducing the demand for transit and presumably and preference for automobility justified as a safety measure, along with the fact that  the current land use and transportation planning and development paradigm doesn't prioritize short trips and proximity, it's hard for me to see a sustained increase in transportational cycling.

... even though cities around the country are converting streets or parts of street right of way to pedestrian and bicycle prioritized zones ("(More) People on streets and the coronavirus").

There is a lot of discussion on maintaining such gains post-pandemic, but again, without population density and proximity, it's hard for such spaces to be active ("Now I know why Boulder's Pearl Street Mall is the exception that proves the rule about the failures of pedestrian malls," 2005), although I argue that there are plenty of opportunities to create pedestrian-focused streets and spaces, provided we start small and in places where the opportunity for success is already high, based on existing conditions and practices.

There's a lot to learn from such places in Europe, even though we have to be explicit about the differences.  There they still focus on cities as destinations and people still go to cities to shop.

Below is a short video, taken around 7pm on a Friday night in June in Liverpool's pedestrian district, which is anchored by shops and department stores, emanates from the main train station, and makes its way through a connection via the Liverpool One shopping center to the waterfront.

The Liverpool area is still diminished economically and government services have been brutalized by the national government's austerity policy.  So I was surprised to see how vibrant and active this district was regardless. 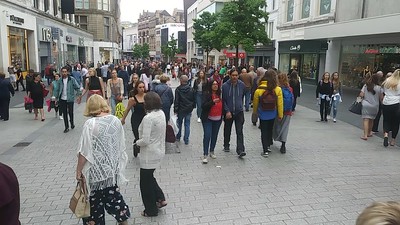 There are large pedestrian districts in most cities in Germany and the Netherlands, Barcelona's Las Ramblas, etc., and lots of good books about these places.

But even the short stretch of Mare Street in Hackney borough in London, near the Hackney Central Overground station shows that pedestrian districts don't have to span over large districts in order to be successful.  While this pedestrian street looks like its been there forever, it's only a few years old. 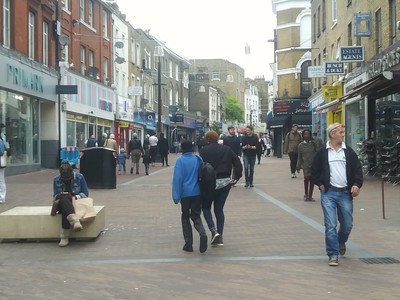 Of course, pedestrian districts and High Streets across Europe have been negatively impacted by retail business failures, which makes it hard to maintain their vitality as a preferred destination ("High street crisis," Guardian).

Transport for London says biking take up could increase significantly:

Suggests that quality e-bikes could replace a second car.