A few years ago, I was somewhat derisive of the effort by the Washington Area Bicyclist Coalition to create the "Capital Trails Coalition," linking advocates and various jurisdictions across the Washington metropolitan area to plan for trails expansion.

In comments to the National Park Service bike planning initiative around the same time--I thought the document was overly positive--I also criticized their self-lauding of participation in the trails coalition effort.

I stated that such a function shouldn't be voluntary, but required of all of the jurisdictions, that the NPS plan should state that the TPB should create a "Regional Trails Collaborative" and that the NPS would join.

To both, I said, "why [the ***] isn't the Transportation Policy Board, the designated Metropolitan Planning Organization for transportation matters, which has a bicycle and pedestrian committee as it is, already doing this?"

Last week, the Washington Post reported ("Government officials adopt plan to expand Washington region trail network to 1,400 miles") that the Metropolitan Washington Council of Governments, parent of the TPB, has voted in favor of a conceptual plan to create/expand the regional network of bicycle trails, routes, lanes, and paths. 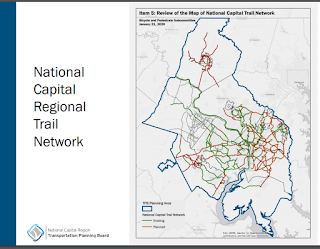 
The 1,400-mile trail expands upon the vision laid out by the Capital Trails Coalition, a group of more than 60 nonprofits, business and government agencies that have been pushing for a connected multiuse trail system of 900 miles across jurisdictions close in to the District. The coalition has closely worked with the TPB in recent years to move the plan forward, and the proposal adopted is an expanded version of that vision. In 2018, the TPB adopted a regional trail plan connecting 60 miles of jurisdictions in the region’s core.

In other writings about the process of social change on a particular issue, which I call the "issuespace/issue space", I've discussed how at various points, different actions and responses are required.

Usually, outside advocacy is necessary to get "more," "better" and "faster" change than if you solely relied on "the government" or people who aren't particularly motivated or independent (e.g., I came up with a great structure for the Bicycle and Pedestrian Advisory Committee in Baltimore County, but I didn't foresee that the County Executive would just appoint as chair someone who worked for the government and was dependent on the County Executive to remain employed).

That's why this slide mentions both trails being unfunded and that the plan is aspirational, or bigger than what has been funded (called "constrained" within transportation planning). 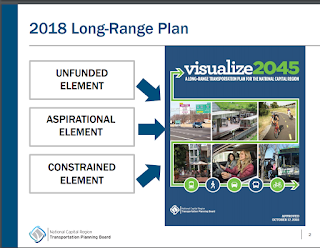 So while I was right that the TPB needed to take a stronger and overarching role in planning a trail network, it wasn't really either/or.   You needed the focused advocacy of the "Trails Coalition" to pressure elected officials to sign off on a plan and provide funding.  I missed that it was and/and. 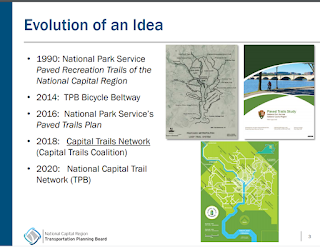 You needed WABA to push the TPB, in part by organizing the local jurisdictions and committed citizens within those jurisdictions. This is pointed out within the Post article:


Political support is critical to ensure that trail projects can compete with other transportation projects that have taken priority over the years, such as fixing and building roads. Transportation advocates and officials say it has become clearer during the coronavirus pandemic that demand for trails is high and that they can take an important role in moving people around the region.

That's so true. Plenty of places have good bike and pedestrian plans. But rarely is the money appropriated to build out the planned improvements.

Now they need to think beyond trails, each year for example I try to use "Bike to Work Day/Bike Month" as an opportunity to write an entry to assess where we need to go:

Trails are key, but more is required.  This is from 2017 (there are 8 more recommendations other than those listed here):

1. As mentioned in previous posts, the Capital Trails Coalition should become an official program of the DC area Metropolitan (Transportation) Planning Organization, the Transportation Policy Board, and it should be extended to include Greater Baltimore and its MPO, the Baltimore Metropolitan Council.

2. Area jurisdictions should commit to creating an integrated metropolitan and regional bikeways network, supporting cycling as transportation.  Trail expansions should be coordinated and opened in association with the launch of the Purple Line light rail and the extension of the Silver Line subway in Fairfax and Loudoun Counties.

3.  Jurisdictions should commit to the creation and printing of a "Metropolitan Bikeways Network" map and it should be posted in Metrorail, MARC, VRE, and Purple Line stations.  Sub-district maps like the Silver Spring Bikeways Map should be updated.  (I recall that Maricopa County, Arizona publishes such a map, at least they did in the past.)

4.  In the DC area, treat Metrorail, Purple Line, and MARC and VRE stations as "trailheads" for the bicycle transportation network.  Extend this treatment to Greater Baltimore, including MARC stations, as well as subway, light rail, and key bus transfer centers.

5.  Develop an integrated secure bike parking program across the region, anchored by the transit network, modeled after the Parkiteer program in Victoria State, Australia.

Centered on Melbourne, the Parkiteer bike parking is a network of 90+ secure bicycle parking cages at railroad and transit stations.  While many European, Asian, and South American cities provide similar types of bike cages, Parkiteer is different in that each cage is a node in a common network, rather than each a free standing facility with different membership and entry access systems.

6.  Upgrade wayfinding and signage systems, including the addition of map signage.

8. Create bike hubs as needed at PL/Metrorail/MARC/VRE stations in the DC area and at MARC, subway, light rail, and key transit transfer centers in Greater Baltimore.

9.  As part of this program, develop special bike hubs at Penn Station in Baltimore and National and BWI Airports, and a new bike hub as part of the expansion of Union Station in Washington, DC.  NOTE: I neglected to include Dulles Airport in this recommendation.  Since the airport will be reachable by Metrorail, it should also have a bike hub.  See "Why not a bicycle hub at National Airport?, focused on capturing worker trips but open to all."