Prince George's County and its schools: the need for vision and transformation

On a Washington Post article last week about tax incentives for new construction in Montgomery County, Maryland, a cavalier commenter said something like "people and businesses should just relocate to Prince George's County," which is next door.

I countered that because of the comparatively low quality of the school system, higher income households for the most part aren't willing to consider living there, therefore developers aren't super interested in building there.

Although Prince George's County has other issues too, including a lack of vision on transit and urban design:

-- "College town follow up: alumni as residents and contributions to community capital," 2015
-- "More Prince George's County: College Park's militant refusal to become a college town makes it impossible for the city(and maybe the County) to become a great place," 2015
-- "Revisiting past blog entries: College Park as a college town and economic development | PG County and Amazon," 2018
--"Setting the stage for the Purple Line light rail line to be an overwhelming success: Part 4 | Making over New Carrollton as a transit-centric urban center and Prince George's County's "New Downtown"," 2017
-- "When the one over neighborhood is in the county next door, and housing prices have been in the tank: Mount Rainer, Maryland," 2016
-- "Washington Post series on "Dashed Dreams: The Plight of the Black Middle Class," 2015
-- "PL #7: Using the Purple Line to rebrand Montgomery and Prince George's Counties as Design Forward," 2017 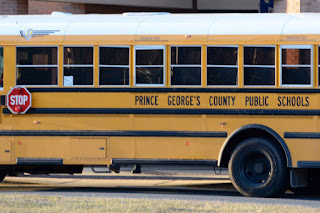 The PG County Executive, Angela Alsobrooks, has an op-ed in the Washington Post ("Prince George’s plan to build schools will help students and the community") about a plan to re/build 6 middle schools, using funding provided by the contractors selected to construct the schools.

Apparently this has been controversial ("Prince George’s Co. proposal to use private funds for public schools raises concerns," WTOP-radio).

From the standpoint of go big or go home, and my "transformational projects action planning" approach (Bilbao, Portland, Edmonton), I'd argue that a few new schools isn't enough to transform the image of the PG School system nor the County as a whole.

So what first came to mind is not the various K-12 education reform efforts in cities like Washington and New York City, which by and large, haven't had the kind of outcomes that are touted, but the Oklahoma City MAPS for Kids program (MAPS3). 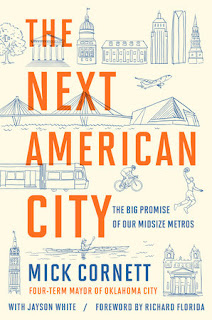 I have mentioned Oklahoma City's Metropolitan Area Projects program, which in various phases, funds significant infrastructure projects including the creation of new parks, arenas and other community facilities, a streetcar line, a revitalized waterfront and canal, etc., through a sales tax surcharge.
Former Mayor Mick Cornett's book, The New American City, discusses the program in some detail and offers some lessons (some of which I agree with, others I don't).
-- "Civic reinvention is constant with MAPS initiatives," Daily Oklahoman
According to the book, MAPS for Kids came about because the city's stakeholders realized that the languishing schools in the core of the city made it difficult to attract new residents and businesses.  It provided a funding mechanism for a pre-existing school improvement program called KIDS, Kee
Because of liberal annexation, Oklahoma City is very large, as big as many counties, and it is comprised of urban and suburban sections, and multiple school districts, where the suburban part of the city has different school districts from the urban core.
Most of the schools in the core were dilapidated, and as part of the MAPS program, in the third phase they proposed focusing on schools, including the renovation or construction of 70 schools in the core Oklahoma City Schools district.
They created a newly elected position for City Schools Chairman, comparable to a Mayor, but for the schools, and for all the school districts in the city.  Of the program, 70% of the funds raised were to go to improving the urban school district, with the rest directed to the suburban school districts serving city neighborhoods.
The rebuilding of the schools in the core has led to independent revitalization within the neighborhoods, including improvements by existing residents and the attraction of new residents and businesses, as well as some improvements to school outcomes, but not as much as hoped ("MAPS for Kids wraps up," Daily Oklahoman).

Prince George's County needs to do something on the scale of MAPS for Kids.  Building a handful of schools isn't enough ("Building a Learning City: Developing School and Community Coalitions in Oklahoma City," Journal of School Public Relations, 2005).
-- "How to revitalize your public school branding," Spellbrand
-- "School Brand Management: The Policies, Practices, and Perceptions of Branding and Marketing in New York City’s Public High Schools," Urban Education, 2014
And a program like MAPS for Kids is an important branding mechanism ("Branding's Not All You Need for Transit," "City Branding versus Identity").  But it needs to be about substance, not image.
But at the same time, an educational outcomes improvement agenda needs to be paired with a construction and revitalization program, which wasn't done in OKC.  But it needs to be more innovative and evidence-based compared to current efforts in the county, as well as reform efforts elsewhere.
-- "Fawning coverage of DC school "reform" doesn't push better practice forward," 2017
-- "Powerful story of how Bristol Virginia elementary school deals with extremely impoverished students," 2015"
-- "Creating cultures of excellence in schooling," 2006
-- "International Baccalaureate program at an impoverished high school in Seattle as a way to improve academic outcomes," 2015
-- "Back to school as a reason to consider schools issues comprehensively," 2015)
-- "Rethinking community planning around maintaining neighborhood civic assets and anchors," 2011
-- "Successful school programs in low income communities and the failure of DC to respond similarly," 2019