The Washington Post reports, "GAO study examines impact of long-distance flight limits at National Airport," on a GAO report on National Airport.  Because the federal government owns National and Dulles Airports, Congress and the Executive Branch is heavily involved in the oversight of these airports. 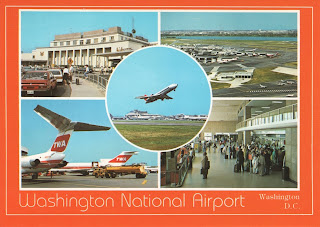 Most of my writings on airports focus on the DC area and the planning elements of ground transportation, which I find wanting.

I've argued that the federally designated transportation planning organizations should jointly plan for the area's airports, two of which are in the DC area, and the third main airport in Baltimore.

The thing is that Virginia aims to prioritize development around Dulles Airport and Maryland around Marshall/BWI Airport, and the jurisdictions around National Airport in Arlington County on the Potomac River across from DC want to minimize operations because of plane noise, even though from a mobility efficiency standpoint, it's the easiest airport to reach and boasts super convenient subway access.

So getting the two MPOs to work together and for the region to create a single airport planning initiative is a pipe dream.

These posts make the point that in regional transit planning you want to connect an area's primary destinations, especially airports, with the aim of creating a functioning and robust transit network, as opposed to a constellation of somewhat connect transit modes and assets.

-- "Airports and public transit access: O'Hare Airport and the proposed fast connection from Downtown Chicago," 2018
-- "Manhattan Institute misses the point about the value of light rail transit connections to airports | Utility and the network effect: the transit network as a platform," 2020

This piece discusses how planning and operational discoordination can result from airport privatization, at least in the US (although airports across the world are privatized and quite successfully).

These posts discuss the economic development aspect of airports.

-- "Aerotropoli and rethinking the scale of mobility networks in the context of a global economy," 2013
-- "Economic impact of National and Dulles Airports," 2014
-- "Do tax incentives pay off? : Illinois; Tennessee; Rosslyn + "The Airport Access Factor"," 2017

FAA rules hinder transit network integration.  A big problem in airport transportation planning more generally is that FAA rules don't allow for airport funding revenues to be used for transit not controlled by the airport.  So either the localities pay for transit connections, or they satisfice it and do a poor job, or the airport builds independent transit requiring extra transfers.  WRT the latter, that's why JFK has its own rail line separate from the NYC Subway and why the N/Q subway was never extended to LaGuardia Airport.

Fortunately for airports, because they are such large trip generators, transit systems go out of their way to connect to them, even if the airport doesn't financially contribute to the construction.  Cleveland's Hopkins Airport was the first to get a local subway connection.  O'Hare Airport has direct subway connections.  Midway Airport in Chicago has a proximate subway connection. Philadelphia has rail commuter service to terminals.

Over time, more and more metropolitan transit systems have added connections to airports, such as BART in SF, light rail in Portland and Seattle, Baltimore's light rail connects to BWI, etc.

And when rail lines are close to airports, they add connections like Amtrak for BWI, Amtrak and regional rail for Newark International, etc.

In Downtown Chicago, I seem to recall that at least one of the subway stations displays airport arrival and departure information.  In any case, the airport stations for the S-Bahn station serving the Hamburg Airport, and the O'Hare subway (elevated) station does this.

Airport planning and the DC area.  WRT the DC area, the problem with focusing on Dulles for growth is that it is far from the core, and development there promotes sprawl.  Although "soon" the airport will be better connected to the core by the extension of the Silver Line Metrorail which includes an airport station.

The Silver Line is a classic example of Steve Belmont's criticism of most transit networks being polycentric and promoting sprawl instead of population and activity concentration.

It will still take an hour from the core to get there by Metrorail, and longer from other places.  Plus the station won't be as well connected to the terminal as is the station at National Airport, making the trip less convenient. (Heathrow is the gold standard for rail transit connections to airports.  The London Underground connects to three terminals, and there is train service as well.) 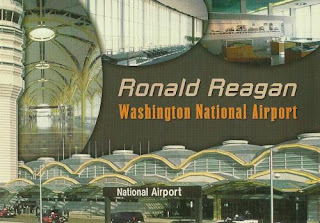 Expanding National Airport's use does come at a quality of life cost because of airplane-related noise, but helps the core of the metropolitan maintain its relevance to commerce and headquarters location, and focuses development monocentrically as opposed to polycentrically.

Certainly, it's no surprise that Amazon's HQ2 has located in Arlington County, Virginia, within one mile of the airport, rather than in a location that is less well served by a major airport, metropolitan subway service, and local transit.  (There is regional railroad service, but as discussed in above-cited entries, it's quite poor compared to BWI Airport, which is served by Amtrak as well as seven day/week MARC commuter railroad service on the Penn Line.)

As Amazon expands and other businesses locate nearby, demand on National Airport will only increase, putting more pressure to ease restrictions.

In terms of leveraging Amazon HQ2's location and the airport for improving and extending the transit network, and strengthening the economic development of the core of the Washington region, see: