The previous entry, "Not sure what to think about WMATA station closures ... and the National Mall," discusses how Metrorail shut down a number of key transfer stations in the Metrorail subway station, crippling its functioning as an everyday transit system.
As part of anti-insurrection defense of the Inauguration of President Biden, Amtrak shut down through services between DC and Virginia on January 20th and 21st, while Virginia Railway Express (VRE) shut down service 1/18 to 1/20 ("Amtrak, VRE, DC Metro alter operations in advance of inauguration," Trains Magazine).
This suggests that there should be expanded thinking about how to go about maintaining such connections even in the face of other infrastructure shutdowns.
Rail-subway connection redundancy in DC.  The previous entry also mentioned some discussion that came up in the ad hoc advisory committee on the DC State Rail Plan ("New State Rail Planning Initiative in DC," 2015; DC State Rail Plan), where we discussed adding rail connections to subway stations in DC, to provide additional connections to the MARC passenger rail system, if for some reason Union Station is shut down.
Currently, all three MARC lines terminate at Union Station, without additional station stops within DC.  MARC's Brunswick Line has a station stop in Silver Spring, not far from the DC line, while the closest Camden Line stop is in Riverdale Maryland, and for the Penn Line, New Carrollton. VRE by contrast, also has a connection at L'Enfant Plaza.
In those State Rail planning discussions, one example was making a connection at the Fort Totten Station for the MARC Brunswick Line, which would provide a new direction connection to the Green and Yellow Lines, but also a Red Line connection independent of Union Station.
A Camden/Penn Line station could be added to the New York Avenue corridor, but it would be without a subway connection.
And of course the ongoing discussions to extend MARC to Crystal City and Alexandria, although I argue for merging the MARC Penn and VRE Fredericksburg Lines into a single, integrated service.
-- "A new backbone for the regional transit system: merging the MARC Penn and VRE Fredericksburg Lines" (2017)
-- "A "Transformational Projects Action Plan" for a statewide passenger railroad program in Maryland," (2019)
One added benefit would be to provide better connections to Crystal City (now called National Landing) to provide better connections to the new Amazon HQ2, as well as better rail connections to National Airport from both north and south.
-- "Crystal City Arlington as Amazon one-half of HQ2 | Part 3: Leveraging Amazon's entrance for complementary transit network improvements" (2018)
A Southeast Rail Corridor to complement and extend the Northeast Rail Corridor.  The Northeast Rail Corridor is built on the Pennsylvania Railroad connections between DC and New York and the old New Haven Railroad's connections between New York and Boston. 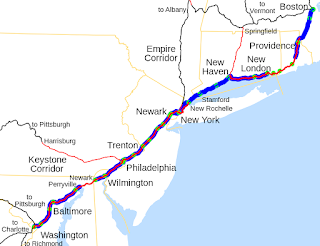 Another element in the DC State Rail Plan discussions then was how you could look at the Northeast Corridor of Amtrak, and Virginia's concept to extend the terminus so to speak, south to Richmond, by upgrading the tracks and Long Bridge.
Virginia is foremost focused on upgrading existing trackage between DC and Virginia, and secondarily extending high capacity trackage from Richmond southeast to Hampton Roads and south to Raleigh, North Carolina.  In turn North Carolina Department of Transportation is focused on extension not just to Raleigh but Charlotte. 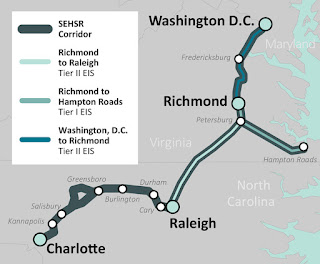 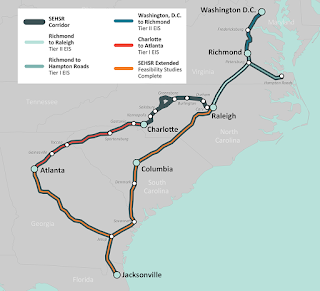 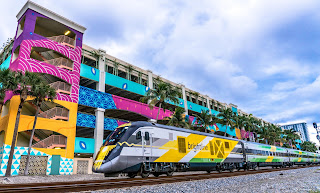 Brightline private passenger railroad program in Florida.  Plus, all the more reason to step up this planning given the expansion of the Brightline rail project in Florida, which will connect Miami to Orlando and Tampa ("Brightline plans to create high-speed passenger rail lines connecting Orlando to Miami — here's how," Orlando Weekly), and could theoretically be extended to Jacksonville ("Virgin Trains expands in Florida. Will it ever reach Jacksonville?," Sarasota Herald-Tribune) where it could connect to the proposed terminus of the proposed Southeast Corridor 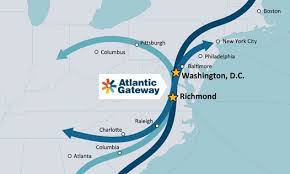 DC and Virginia are connected by the Long Bridge.
There is an ongoing program to renovate the Long Bridge which provides rail connections between Union Station and Virginia.
The Long Bridge is owned by CSX, which because the freight rail capacity of the bridge is adequate to their needs, has no interest in expanding the capacity of the bridge to accommodate passenger rail service.
Therefore, Virginia has taken responsibility for bridge expansion, as part of their rail initiatives under the Atlantic Gateway program.
They did this because of its importance to the realization of a wide range of state rail rail initiatives.  Last year they also purchased from CSX hundreds of miles of railroad trackage, to be able to expand passenger rail service throughout the state ("Virginia to build Long Bridge and acquire CSX right of way to expand passenger train serviceirginia to build Long Bridge and acquire CSX right of way to expand passenger train service," Washington Post).
Concerning the Long Bridge, the Washington Area Bicyclist Association has advocated for including a bike/pedestrian connection on an expanded Long Bridge.  And I advocated for bus transit lanes, to provide redundancy in case the 14th Street Bridge is closed or incapacitated ("Tilikum Crossing Bridge as a model for the DC-Virginia Long Bridge Expansion Project," 2018).
The recent bridge closures in advance of the Inauguration demonstrates this is worth considering, as well as shifting from a bridge to a tunnel connection between DC and Virginia for regional and multi-state rail passenger services.

There are lots of reasons for improving transit, but this inauguration has nothing to do with it.

The security plan took advantage of the pandemic to discourage everyone from the general public to stay away. The road closures, Metro closures, physical barricades, etc.

There is literally no amount of redundancy that will matter if the security plan is to close everything down.

Union Station wasn't closed. So the issue is from Union Station to the Virginia border. Granted, with my prosed redundant bus lane, they could just run trains from Crystal City or Alexandria.

Sadly, I'm sure that running ANYTHING through the first street tunnel was considered a security threat, for the inauguration. Even before the Q insurrection , the plan was to make the event as scaled down as possible due to the pandemic. This just led to an expected overreaction to lock the region down.

That said, yes, this shows why transit redundancy is needed.
Ft Totten would be a great transfer location, except that the tracks are on a bridge, So I'm not sure CSX would like trains stopping there. However, having sidings just south of the bridge would be possible, as there used to be some, for former customers. If the concrete supplier was willing to give up land, and the building at the end of the metro platform was demolished for stairs and elevator,it may be possible to have tunnels under the tracks to platform for transfer. I'm sure that it would relieve some of the congestion at union station (and metro center/gallery place, for that matter).

I've read the DCrail report from 2015, what are your thoughts on the proposed infill rail stations?

Union Station wasn't closed, but Amtrak reduced service and closed all service to the South.

The streets around Union Station were completely shut down. The Metro station was closed. Point being, redundancy doesn't do anything when the security plan calls for shutting down the redundant systems.

Now, the circumstances here are unique (attack on the capitol, combined with the pandemic, which dismissed the need to accommodate travel either for the event or for the days leading up to it), but that's precisely the reason it's a poor example to use for new transit links.

Infill Stations make little sense at this time. First priority is to actually build up a combined regional rail system so that it's offering quality service.

Fort Totten would make sense if you assume good regional rail service, however, it's a constrained spot. You can't add tracks there to satisfy CSX, which is going to be a big enough challenge to real regional rail as it is.

All of the other Brunswick line locations called out in the rail plan are silly. The Red Line is right there! The whole point of the regional rail concept would be to have a broader stop spacing.

WRT Fort Totten, these are very good points about the practical problems.

But my writings are based on the idea of creating a true regional rail system:

- creation of a German style transport association linking all the various agencies, with overarching planning
- linking fare media between "local" transit and the regional rail
- the merger of VRE and MARC
- starting with the MARC Penn and VRE Fredericksburg Lines
- expansion beyond the current lines, as covered in my earliest writings (2006) based on BeyondDC stuff
- bi directional Brunswick Line
- the "Statewide Passenger Rail Plan" for Maryland
- even the suggestion of another line down I-270 into Bethesda, Georgetown, and Rosslyn

WRT the infill stations, it's not like we were consulted in great detail, compared to MARC and VRE.

I'm gonna have to go back and skim those sections. It was some time ago and I don't remember the specifics.

A huge f*up in CSX's Virginia Avenue Tunnel reconstruction was not providing a way for passenger trains to go east, instead of just to Virginia. So that shapes recommendations.

This is probably why MARC had the idea to serve Southern Maryland from the Penn Line and a turn south after New Carrollton.

Plus the thing I learned in the process is that "regional" rail planning is two step. One each state has its State Rail Plan, then they have FRA approval to work together on intra-state regional rail planning.

But the guy who spearheaded the plan for DC left. While Virginia as you know has done a lot of pathbreaking stuff since, Maryland has not. Maybe that could change once Hogan is no longer Governor. But it still set back rail planning by many years, with the exception of weekend Penn Line service.