Another example of a failure to plan: clearing snow in Texas

We have to cut Texas some slack on snow removal, because it doesn't snow there very often, definitely not in large amounts.  Plenty of places that get a fair amount of snow plan inadequately when it comes to "maintenance of way" in the winter.

-- "Snow, winter, and the Sustainable Mobility City," 2019 (includes links to past entries)

But why does Texarkana, Arkansas have the capacity to remove snow and Texarkana, Texas does not? 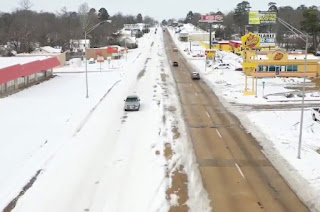 The Texas side of State Line Avenue in Texarkana is unplowed.@CharlesPeekWX via Twitter
The road has since been cleared.  But apparently Texas has only 700 major snow plows for the entire state.
Note that while DC's Eastern, Western and Southern Avenues lie fully within DC even as they border Maryland and you'd think the boundary is in the middle of the road, I have seen similar results.  For example, even though "it's in DC," the Town of Mount Rainer, Maryland does snow removal on its side of Eastern Avenue, usually many hours before DC gets around to it.