On an e-list we were discussing Albany, New York, which you would think would be a successful place, since it's a state capital.  It's not. 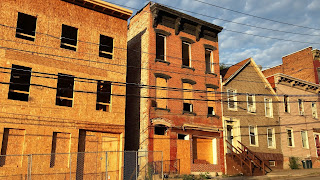 One of the elements I mentioned is the architectural richness of historic residential building stock in the core that ought to be an incredible asset, but isn't.

Someone else blamed its state on the fact that it is mostly home to low income households.

Instead of being critical it got me thinking about mutual aid and community economic development and entrepreneurship approaches that could help the community rebuild its economic well being.

Based on a whole bunch of examples, it occurred to me that one way to help improve the microeconomies of such neighborhood would be to apply "new" models for tourism, integrating them into one initiative.

I was also influenced by a recenet NHK episode in the series "Connecting People in the Pandemic", featuring Minami Shintaro, the operator of a guest house in Seto City, Aichi Prefecture in Japan, and how he works to connect visitors to businesses in the local community, especially to craft producers, like of ceramics, for which the city is known.

Although the idea isn't necessarily new such as the 2006 Washington Post article on the Leimert Park neighborhood of Los Angeles, "Los Angeles's Black Pride" (place details).

Airbnb type rentals are a way to generate revenues for houseowners, revenues that can be used to improve properties.  More visitors to the neighborhood can in turn support local businesses, from coffee shops to tour guides ("For Black tour guides in Savannah, the historical is personal," Washington Post).

Gentrification?  People may complain this is "gentrification" but the problem these neighborhoods have is lack of demand, and often hundreds of vacant properties.  Displacement isn't the issue.  Lack of economic demand and a need to generate economic activity at the scale of the neighborhood and individual households is the issue.

However, it's important to note that the way I conceive of this, it's a ground up initiative, supporting local residents and business owners, with the assistance of government, philanthropic and community organizations.

It's not about economically well off businesses and people parachuting in, claiming they're "helping" and capturing the majority of the benefit, such as what happened in the Boyle Heights community of Los Angeles ("Good-Bye to All That: Boyle Heights, Hotbed of Gentrification Protests, Sees Galleries Depart," ARTnews, "Gentrification Protesters in Los Angeles Target Art Galleries," New York Times).

The Leimert Park initiative was a venture of community organizations and businesses.

And there has been complaints about Airbnb properties in low income neighborhoods, including DC ("Airbnb Has Made Housing More Expensive In Some Parts Of D.C., New Research Paper Finds," WAMU-FM/NPR).  Again, I am proposing a ground up initiative focused on community economic development and self help, not on programs benefiting nonresidents.

Resources.  A great tool that has been supplanted by newer editions, but I think is great, is the Tourism Destination Assessment Workbook produced for Nova Scotian communities and the Downtown and Business District Economic Development from the University of Wisconsin Extension's Center for Community and Economic Development.

The out of print Tourism Development Handbook is excellent and worth tracking down. 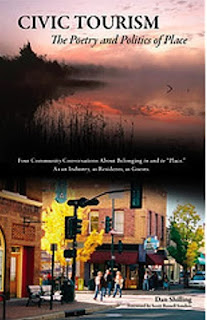 Civic Tourism.  In 2005 I was introduced to the concept of Civic Tourism, as discussed in the book by Dan Shilling.  I even went to a conference on it in Prescott, Arizona.

The idea is to refocus tourism from the big spectacle focused places (Disney, etc.) towards smaller place-based tourism, heritage tourism (historic buildings and sites) and communities.

Bike tourism/Route Verte and Pennsylvania Trail Towns.  Many rural communities promote bike-related tourism.  If not races, they create tour routes, publish maps and brochures, and pay for a wee bit of marketing in cycling publications.

Route Verte is a provincial-wide trail system in Quebec, and the complementary program VeloHospitality supports bicyclists along the route, with lodging, restaurants and services, so that cyclists can participate without having to use an automobile.

The Great Allegheny Passage Trail which connects to the C&O Canal Trail, links Washington, DC to Pittsburgh.  The Trail Towns program supports bike-related tourism and hospitality services along the route, stoking economic development in small places that have few options. 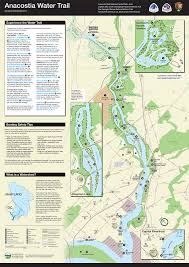 Urban bike tourism.  Speaking of urban areas, I've thought that DC and Maryland should do something similar with communities, including DC's Anacostia, neighborhood, Hyattsville, etc., along the Anacostia River Trail Network, which extends from Southeast DC to Greenbelt, Maryland, with extends with connections north towards Baltimore and west into Montgomery County.

Related to urban bike tourism, Velo Quebec, the provincial bike advocacy group, has an office fronting a major public park in Montreal, with a cafe and travel operation.  Add a repair shop and it would be a great hub for urban bike tourism support.

A couple good books on the subject are The Town that Food Saved: How One Community Found Vitality in Local Food and Food Town, USA Seven Unlikely Cities That are Changing the Way We Eat, published by Island Press.

In the city, there are ways to do informal food presentations too, not unlike how in Havana, people have restaurants in their houses, called paladares ("sTHE UNTOLD STORY OF HAVANA’S CLANDESTINE RESTAURANTS" Parts Unknown TV Show).

Cottage food operations are being legalized in more US cities, there are the special event "restaurant events" in people's homes, like this at one time in Los Angeles ("Prodigy," New Yorker Magazine).

There was a place in DC that did this, only open in the evenings some nights a week, in a storefront on 7th Street NW, I think it was called Seasonal Table.  We went once, and it was cool.  I've encouraged my old next door neighbor to do this, as he is a maestro of Brazilian churrascaria.

The City of Helsinki agreed to sanction an idea of advocates called Restaurant Day, where on one day, anyone can do pop up food activities ("On Restaurant Day in Helsinki, Anyone Can Open an Eatery, Anywhere," Atlas Obscura) even if they are unlicensed.  From the article:

Restaurant Day began as a civic protest. In 2011, Helsinki resident Timo Santala wanted to start a mobile bicycle bar, selling drinks and tapas. Frustrated by red tape in a city where everything is highly regulated, he imagined a day where a restaurant could open with no licenses and no limitations. He and his friends came up with Restaurant Day, a food carnival where anyone can open a restaurant, anywhere they want, for a single day. 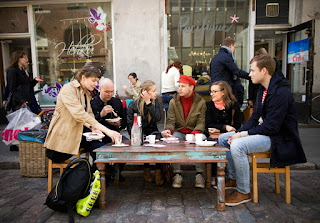 In 2012, this Cuban restaurant popped up in downtown Helsinki.
ROY BÄCKSTRÖM/RESTAURANT DAY

Helsinki could have turned it into a cash grab, fining hundreds for operating a restaurant without a license. “In the beginning, the authorities and the owners of regular restaurants vocally opposed Restaurant Day,” said Weijo. “However, it attracted such a wide range of participants that opposition was almost impossible.”

In fact, the city actually came on board. Grasping the appeal of Restaurant Day, Helsinki’s tourism website now features it as an attraction. Which is a pretty extraordinary achievement for an event that deliberately side-steps the law. (It helps that there have been no known instances of food poisoning stemming from Restaurant Day, according to Elisabeth Rundlöf, a marketing manager for the City of Helsinki.)

The idea has spread to many other countries ("Participants’ freedom made Restaurant Day the world's largest food carnival," Aalto University).

Here, I am saying add this as an element of a community tourism initiative focused on lower income center city communities with  heritage, civic, and food elements, aimed to support the development of microenterprise.

A variant of food tourism is agritourim, falthough that is rural-focused on farms, wineries and such. 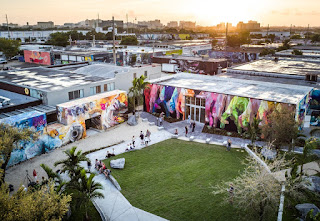 Public Art. Wynnwood in Miami is known for its development of murals as an outdoor art gallery, called Wynnwood Walls ("How the Wynwood Walls Have Shaped Miami's Art Scene," Architectural Digest).

Public art could be an element of this kind of ground up neighborhood revitalization and community economic and microenterprise development initiative.

But it would be a decision that the neighborhood would have to support.