Presidential libraries have been in the news of late over speculation on what former President Trump might do wrt a library ("Will There Be a Trump Presidential Library? Don’t Count On It.," Politico). 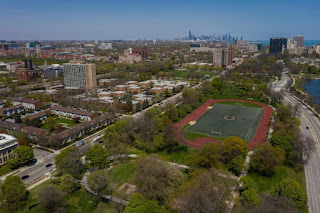 The proposed Obama Presidential Center will be located in Jackson Park in the Woodlawn Neighborhood of Chicago, and will displace existing park functions. Photo: Zbigniew Bzdak / Chicago Tribune.

The proposed Obama Presidential Center in Chicago won't be a traditional library because of various decisions made by the Obamas.  The records won't be going to the library but will remain in the custody of the National Archives and Administration, which plans to put the records online.

(The memoir book by Robert Caro has a nice discussion of his looking at the LBJ archives box by box at the Presidential Library in Austin, Texas.  There is great value in physical records, going through them, making serendipitous connections, etc.) 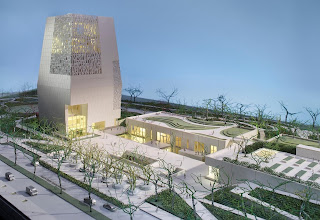 The Chicago Tribune has an editorial ("Obama center in Jackson Park must deliver on 3 key pledges") about current negotiations and attestations about the Obama Center, which controversially will use park land.

Economic impact.  One of the claims is that the Center will generate 700,000 visits per year and $3 billion in spillover economic development.

I think that's a stretch because no presidential library has consistently generated that high of an attendance year after year.

An economic impact study of the Clinton Center in Little Rock, Arkansas shows the difficulty of pinning down impacts in a realistic way.  For example, how much of the $3.3 billion in development elsewhere in Downtown is attributable to the Clinton Center?  Some of it certainly is, but not all.

Similarly, it states that there was at the time of the study, almost $700 million in travel expenditures.  But much of that money isn't spent locally, e.g., airplane travel, hotel stay revenues repatriated to out of town owners, etc.

Still, the economic impact, especially in otherwise weak submarkets, can be important, and as a priming action, trigger the opportunity for spillover investment.

A key aspect is structuring retail and other functions proximate by off site to spread development effect outward. It's worth reading regardless of the type of cultural institution you might manage.

However it's worth pointing out that attendance, techniques for boosting attendance, and average spending per visitor are different issues.  For example, many visitation segments (children, college students) don't spend much money when they visit cultural institutions.

I do think the Obama Center has a better chance for higher attendance because it will be located in a major city.  With the exception of the JFK Library in Boston and the LBJ Library in Austin, Texas, most presidential libraries aren't located in major cities that are already experiencing high visitorship.

The ten lessons from the CT article:

One aspect that isn't mentioned on this list is that the plans for the Obama Presidential Center include a community center-type component — classes, concerts, lectures, seminars and workshops to train future leaders, a library branch onsite, outdoor recreational areas — things that don't just engage with the local community but give people a reason to visit multiple times a year, nor only that one time with their girl school troop that you went to Springfield (or whatever your state capitol is).

I need to sit down and read the plan.

While I was writing the entry, I thought about those kinds of functions and whether or not they were a part of the plan.

I advocate for integrating such programs and activities in public works projects like these. E.g., my thinking on libraries as community cultural centers and incorporating a wide range of activities.

It's like public art murals. Most are great for community building, but don't do that much for revitalization.

I've been thinking of re-writing this piece along my "transformational projects action planning" concept.

Anyway, when I first got super involved in "local stuff" a key cultural asset in the H Street corridor was the Capital Children's Museum.

They didn't like the location because it was then gnarly, even though it was just a few blocks from Union Station. But the reality is that then it definitely wasn't family friendly, the kind of place you'd feel comfortable walking to, or afterwards then shopping and eating in the adjacent commercial district.

But that's too when I learned about how differences in audience intent and interest make a big difference in how cultural assets contribute to ancillary economic activity in a commercial district.

Back then (c. 2002), Americans for the Arts published a number of $27+ per patron of additional spending (excluding overnight stays).

That's true for someone going to a play, or even a major museum, but not a children's museum, which mostly attracts students, who bring their lunch and don't spend any money on other stuff.

Although at the time I had a bunch of ideas for complementary children's focused retail and activities like a kids hair salon, toy store obviously, children's art focused gallery (a few months before I had been to a conference in Cleveland, and in one of the galleries at the time they had an exhibit of Dr. Seuss art), a children's theater modeled after the Imaginon in Charlotte, NC, an awesome children's bookstore, a children focused library, etc.

It probably could have worked but would have taken many years... and I just don't know how successful it would have been.

CCM made it easy for me. They sold the building, which was redeveloped into housing. It took them many years but now they have a small facility in the Reagan Trade Center. But to me that place requires everyone to go through security, which is a hindrance to visitors.