A comment on the gun deaths in Boulder, Colorado

10 Dead yesterday, in a shooting at a supermarket in Boulder, Colorado. 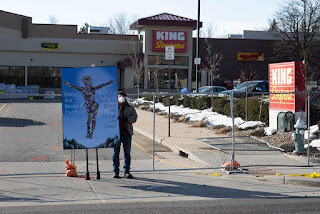 A man held a sign for the victims of the mass shooting on Tuesday.
Credit:  Eliza Earle for The New York Times

Ironically, just last week, courts struck down an attempt by the City of Boulder to limit access to automatic guns ("A judge recently blocked Boulder from enforcing its assault-weapon ban," New York Times).  From the article:

Judge Andrew Hartman ruled that under a state law passed in 2003, cities and counties are barred from adopting restrictions on firearms that are otherwise legal under state and federal law, The Denver Post reported. Gun advocates made that argument when they sued to overturn the Boulder bans shortly after they were adopted.

The judge rejected the city’s arguments that the home-rule provisions of the state constitution gave it the power to adopt the bans as a matter of local concern, and that they were necessary because the state did not regulate such weapons. As of last week, lawyers for the city had not said whether they planned to appeal.

Given the number of mass shootings in Colorado, you'd think they could have had a reaction more like Australia's ("How Australia All But Ended Gun Violence," Fortune) or New Zealand's ("New Zealand tightens gun laws further in response to mass shooting," Reuters), where after mass shootings, the countries imposed strict limits on guns. Instead, in the US the reaction is to do nothing.

There is a serious disconnect between governments ensuring "public safety" and how modern interpretations of the Second Amendment have allowed for the wanton ownership of guns, especially high powered guns like assault weapons, which have no real public benefit or purpose outside of waging war.

Interestingly, while federalism is often touted as supporting innovation by the states, so called "Laboratories of Democracy," with conservative groups like the American Legislative Exchange Council, Club for Growth, other lobbying organizations creating platforms to disseminate and pass conservative legislation ("You elected them to write new laws. They’re letting corporations do it instead," USA Today), and state attorney generals seeing an opportunity to sue the federal government to support political ideology instead of policy ("Republican AGs take blowtorch to Biden agenda," POLITICO), it's difficult for there to be a lot of, let alone any, innovation at the state scale.

Yes, motive matters in mass shootings. But not as much as means.
Opinion by Kate Cohen