In response to the Great Financial Crisis many national governments rejected Keynesian fiscal responses and instead imposed austerity.  Perhaps the greatest adherent to austerity was the Tory Government of the UK (abetted by Liberal Democrats), which gained power in 2010, after successfully blaming the Labour Government for the crash. 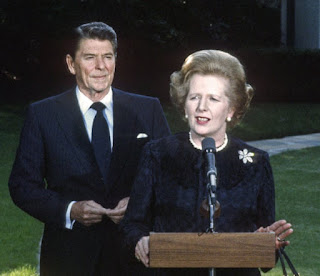 While it's commonly said that Ronald Reagan followed Margaret Thatcher's lead on neoliberalism, the fact is that Reagan pushed such approaches as early as his campaign for Governor of California, starting in 1965.  Photo: Rex Features.

Austerity was a way to further shrink government, although to be fair, plenty of privatization measures were adopted by the previous Labour Governments (although such initiatives started during the Thatcher years beginning in the late 1970s), now called neoliberalism ("Neoliberalism – the ideology at the root of all our problems," Guardian).

The Conservative Party blamed the adoption of austerity on the EU, even though it was their choice ("Budget 2010: Pain now, more pain later in austerity plan," Guardian, 2010), and likely the effects of austerity on the populace along with the blame is the primary reason that a slight majority of Britons voted in favor of Brexit in 2016.

Britain has a very centralized form of government, with the national government the ultimate authority, and prime funder even of local government--local taxation schemes are minimal, property taxes exist but are quite low.

In the ten years since austerity, some local governments have lost as much as 2/3 of their total funding ("The devastating numbers that show just how BADLY Liverpool is treated by the Tories," Liverpool Echo, "Here in Liverpool, we know what northern austerity looks like up close," Guardian).

Basically, it's easy for British Conservative governments to single out local governments run by the opposition for deep cuts, something that Trump wanted to do, but the US system has legal fairness requirements that make that impossible ("Trump signs memo to defund 'lawless' cities but experts raise legality doubts," Guardian).

Plus, in the British funding system, local governments are also responsible for providing care to the aged, which is a cost that continues to explode.

Most governments are cutting all discretionary services, such as culture (libraries, museums, etc.), buying property as an investment to generate rental income, often in communities distant from their own, and privatizing as many services as possible to reduce headcount and pension responsibilities.

John Harris of the Guardian reports that as many as 12 local governments are facing bankruptcy at the moment ("Levelling up? Most of the UK is still in the grip of austerity,"), while more than 150 local governments report that significant shortfalls are to come, abetted by the loss in business activity and increased costs due to covid ("Four English councils get emergency government funding," BBC).

US cities and states have a similar problem, but not nearly to the same degree.  While it is true that US state and local governments have serious financial overhangs from unfunded pension liability, Republicans are making similar fallacious arguments about local and state government financial exigency as a result of the pandemic, calling it a "bailout of blue states" ("The fiction of Mitch McConnell’s ‘blue state bailout’," Chicago Sun-Times) and being deliberately misleading ("Covid’s Comeback Means Washington Must Help Red And Blue States—Now," Forbes Magazine).

Yet another example of state failure/neoliberal overreach.  Adherence to neoliberalism results in significant disinvestment and underinvestment in government capacity.  For a long time this could be withstood because previous investment had been high, and was there to be consumed.  But after decades, the lack of investment finally reached critical mass and is weak in the face of any extranormal circumstances.

This was the logical result of the failure to invest in public health and to provide credible, scientific-based responses.  And the continual reduction of local government funding.  Although in the US, because of federalism, states and cities could act differently and professionally, while for the most part, British government centralism prevents this.  In the US, San Francisco, while not as successful as Taiwan, is a national best practice example of proper response ("What the San Francisco Bay Area Can Teach Us About Fighting a Pandemic," New Yorker).

Texas electricity failure.  But it's the same kind of state failure that resulted in the power crash in most of Texas two weeks ago -- while much of the state faced debilitating power losses the parts of Texas not part of that deregulated and lightly regulated system did not experience power losses ("Not being connected to rest of Texas helped El Paso in cold wave," El Paso Times).

Although Lubbock had already made a commitment to shift to the in-state system, which they may reconsider ("Sen. Charles Perry raising questions about ERCOT reliability as Lubbock prepares to join," KCBD-TV).

This is a function of climate change, more extreme weather and the belief that because Texas is in the South, it's not necessary to prepare for cold winters.  But the state has had multiple extreme cold events in the past 30 years, and each time it has blown off a concerted response.

Flint water crisis. The state government took control of the Flint government, because it was bankrupt as a result of the destruction of the local economy because of its abandonment by the auto industry.  To save a few dollars, Flint changed its water provider, but failed to add the proper chemicals necessary to minimize lead leaching into the water system.  State control, minimal regulation by the environmental agency created the problem.  It would have cost a few thousand dollars per month for the chemicals!  The cost of responding to the crisis approaches or exceeds $1 billion.

And local government bankruptcies in the UK...

The Guardian: There's too much airy optimism about post-Covid Britain. Prepare for brutal cuts.
https://www.theguardian.com/commentisfree/2021/mar/23/britain-post-covid-cuts-boris-johnson-budget-austerity