Union Station is a perfect example of this.  It should be planned at many scales to best leverage the opportunities it presents. 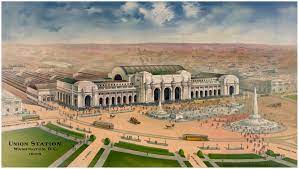 Yes, the planning has been inadequate as it relates to other modes, including pedestrian and bicycling, but also surface transit, subway transit and commuter rail ("A "Transformational Projects Action Plan" for a statewide passenger railroad program in Maryland," 2019, "Virginia’s $3.7 billion rail plan called a ‘game changer.’ Here’s what we know about it," 2020, Post).

Like my point about better planning around maglev ("DC, Transformational Projects Action Planning, and the Baltimore-Washington Maglev project"), so much more ought to be considered.

Washington's Union Station not multimodal enough?  Union Station is in the news again because plans for the station's expansion, combined with the construction of a mixed use development over the trainyard between the station and K Street NE, are said to be too automobile focused ("Federal agency to revise design for Union Station overhaul, criticized for being too focused on cars," Washington Post) and stint on accommodation of buses--providing less space for buses ("Virginia’s $3.7 billion rail plan called a ‘game changer.’ Here’s what we know about it" Post).

In the planning process, I made extensive written and verbal comments about the accommodation of motor vehicle traffic, pedestrians, and bicyclists, and especially in terms of aesthetic dimensions. 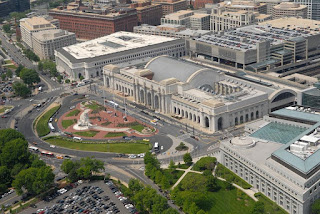 (WRT pedestrians, I said the intersections on Massachusetts from North Capitol to 2nd Street, along First Street, and the unit block of G Street needed to be treated as a network.  I made points about access to the rear of the station from H Street NE beginning with planning engagements starting in 2001!)

I also have an extensive discussion of how Union Station can be better leveraged as a tourist information and cultural center, with museum and tourist train functions as well ("New State Rail Planning Initiative in DC," 2015).

The front of the station is chaos, mixing pedestrians, tourist buses, taxis and ride hailing vehicles, and personal automobiles doing pick up and drop off.

These two parking lots in the foreground seem like a great place for a complementary inter city bus terminal for Union Station.

-- "Union Station bus terminal," 2011
-- "New bike parking facility at Maastricht train station in the Netherlands reminds me of the need to create high profile bike hubs in the US," 2018

This 1950s Hertz rental car ad promoted the idea that you would travel long distances by train, and then rent a car to get around your destination.  This ad mentions Washington's Union Station specifically. 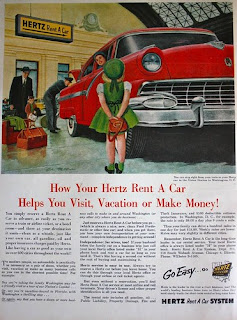 Separating bus services by placing them on different sides of train stations in Germany.  In my comments I referenced what I saw with city train stations in Hamburg, Dortmund, and Essen, where transit buses were on one side of the station, tourist buses on another, and intercity buses on a third, although with Hamburg they are accommodated in a separate terminal, a short walk from the station, but proximate to a subway entrance.

Underground bus concourses in Denver and Brisbane.  My preference was to move most of the surface traffic--taxis and automobile pick up and drop off, and local transit buses, but not tourist buses--underground, in front of the station.

Good examples of underground bus terminals are Denver's Union Station, where transit buses serve the station via an underground station.  And Brisbane, Queensland, Australia, where the Queen Street Station in the central business district, accommodates the inter city bus commuting services from the suburbs. 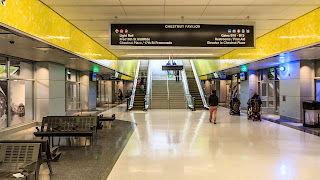 But there are decent above-ground inter-city bus terminals in many places, including Montreal and Hamburg.  They have gates, good wayfinding signage, integrated arrival and departure screens, etc.

But given the underground train and subway tunnels as well as the possibility of expansion of these tunnels, to fit in all this would require a couple of levels, and the space probably doesn't exist.

Between the train tunnels, limited space, and the high construction cost of underground facilities, I can see why they might have blown off my recommendations.  But when you're building something to last two or three generations and such a signature facility, you really ought not to satisfice, because you'll pay the price for generations (like with Penn Station in New York City).

A couple other ideas about inter city bus at Union Station.   First Street NE.  According to the Post article, the plan is to shift the location of intercity bus from one deck of the parking structure, accessible from H Street NE, to First Street NE, with outside staging of platforms on G Street NE.

The complaint, I think justified, is that it is not enough space.  Plus outside line up to get on the buses is not particularly comfortable for riders and is likely to be a visual and logistical mess.  Which is a high source of complaints aboutthe quality of intercity bus services now ("Taming the Inter City Bus Industry," Gotham Gazette). 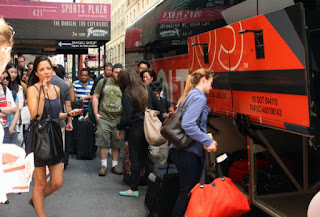 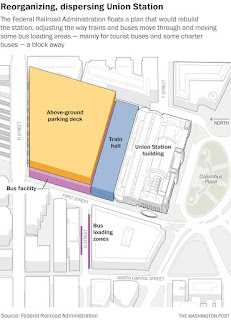 My preferred alternative: Put it across the street, off Massachusetts Avenue.  Alternatively, the bus terminal could be built underground and above ground on the two Senate parking lots across from the Station/Post Office, between Massachusetts and Louisiana Avenues, bisected by E Street, as shown on the left section of the satellite image below.  With an underground passageway from Union Station. 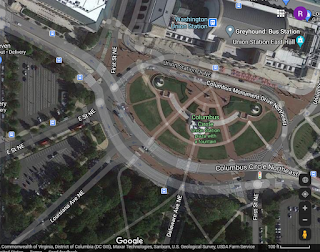 That's along the same lines of the current station planning, but without the physical constraints, and offering indoor accommodations for riders.  Providing the Senate is willing to give up their parking lots.

To deal with the bus traffic and congestion, I would create an underground bus tunnel on First Street NE, between New York Avenue and the Union Station complex, connecting to the bus terminal.

The Terminus Centre-Ville commuter bus station is proximate to commuter rail and subway stations.  Gates to buses are accessed from a central waiting area

Wikipedia photo by Henrickson.
The Downtown bus terminal in Charlottesville, Virginia, serving both local transit and inter city bus services, has an analogous set up, although it's above ground.  A nice waiting sized waiting room with seats protects riders from the weather.  Queen Street Station in Lancaster, Pennsylvania too.  And many others

The lots across Mass Ave would be a great location. And the project team wanted to evaluate them, but since those lots are controlled by Congress and the Architect of the Capitol, they were not allowed to include them in any analysis.

Look at an aerial view around Union Station, and you'll see lots of parking lots. And the chances are that Congress is in control.

And, sadly, any future plan for Union Station will likely need money from Congress, so no one wants to challenge AOC on those issues. This is one area where Statehood would help (particularly since this is the Senate side, and the Senate Sergeant at Arms is the one in control of those parking permits).

Makes sense. But dumb. You should still evaluate. You can't make an argument without information.

And it could even be possible to create an equal amount of parking as part of such a project.

wrt the community hub point about train stations, I meant to reference discussion about a "new" Downeaster station in Portland, Maine.

They tore down the old station for a building project, and in the process displacing the train station to an off the mainline location. Which doesn't work so well.

So now that the development no longer exists, they are talking about putting the station back where it was.

I can't seem to access the comments now, but someone made the point how the new station (where the old one was) could be served by local intra-city shuttle and transit buses, alongside inter-city bus, local taxi services, etc.

That's what should happen with all stations, in terms of leveraging the station as a key element within the local transit network.

1) There isn't a scarcity of in-demand land around the train station
2) The bus/rail services are highly complementary.

In the case of DC Union Station, there clearly isn't an abundance of land around the station to suit all of the interested parties. Moreover, I question how many rail/bus transfers are actually occurring. What you're left with is a moderate bus station, which shares amenities and the brand name with a much more well-developed adjacent train station.

If anything, it's local bus service, not intercity, which needs improvement at Union Station. Right now Union Station is served by a single Metro line, a single high-capacity bus route (Circulator), but very little else in the way of rapid transit.

By placing themselves adjacent to the rail service, intercity bus operators are more-or-less resigning themselves to be the low-market alternative to Amtrak in every circumstance. Why not aim for a bus station/terminal closer to the CBD - L'Enfant Plaza, with good highway and Metrorail connections, comes to mind.

Actually, that leads me to remember a thought which I've been carrying with me for a while - regional coach-based bus service (along the lines of NJ Transit commuter service) from the suburbs, particularly where rail infrastructure is scant, taking advantage of highway capacity.

A common hub at L'Enfant could add to network capacity by facilitating transfers and reverse service.

Plus with office demand down, there may be no better time to snatch up an aging office complex, build an underground bus terminal, and sell/develop the air rights.

In my "complementary transit network improvement" posts on the Purple Line and the Silver Line, I've mentioned the need to provide integrated and expanded commuter bus services. And I've mentioned that MTA Maryland was the only publisher of an integrated map. They've since put their long distance bus services on the train map. The Virginia services aren't integrated, but should be seen as complementary to VRE.

In writings about the Silver Spring Transit Center I suggested they should build a commuter bus waiting center, move the service office down to it, on the east side of the service entrance off Colesville.

And when I write my series of pieces on "national" rail planning, really national long distance transit services, it will include train, bus (the Bustang program in Colorado is a model) and waterborne services.

If you're interested in inter city bus -- and your points about bus-rail are reasonable but I disagree because if the need for the local-regional transit interface-- and you don't know about Joseph Schweiterman at DePaul, you should check out his work.

My thing about near Union Station is to limit the need for big buses to waste a lot of time traveling on congested center city streets.

Nice surface station not immediately by train stations is the bus station in Luverpool, although it is operated by the local transit authority, apparentlythe only instance of this in England (not sure about the UK). (Next to Liverpool One shopping center and across from the waterfront and on a main road separate from the inner city grid.)