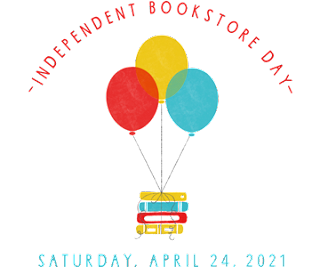 Although we never need an excuse to buy a book, why not do so tomorrow, at an independent bookstore.

Many are offering special incentives.

They've just announced they've bought their own buildings ("Baltimore’s Red Emma’s is moving again, this time to a ‘forever home’ of its own in Waverly," Baltimore Sun) in an example of what I call BTMFBA ("BTMFBA: the best way to ward off artist or retail displacement is to buy the building," 2016) in the Waverly neighborhood, which is home to one of my favorite farmers markets and the awesome Pete's Diner.

Red Emma's is one of the examples in "Update: Neighborhood libraries as nodes in a neighborhood and city-wide network of cultural assets

," as a multifaceted space -- the North Avenue store had a cafe, space serving the cafe could also be used for meetings, presentations, and author talks, the bookstore, and a separate private meeting space.  According to their press release, the two buildings will be renovated into a: 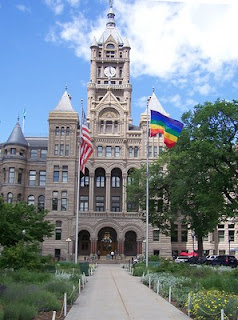 3.  Bookstores as hubs/community centers for cultural communities.  There was an article ("Utahn launches crowdfunding campaign to bring a ‘queer little bookstore’ to Salt Lake City") in the Salt Lake Tribune earlier in the week about the desire on the part of Kathryn Mahoney and others to create a LGBTQ bookstore.

At first, I was a bit skeptical, because the heyday of such bookstores in major cities has long since passed ("Book Store To End Chapter Of Gay Life," WAMU/NPR, 2009, "How Are There Only Three Lesbian Bars in New York City?," New York Times).

Then again, Salt Lake City isn't a major metropolis like NYC or DC or Montreal ("Gone ‘underground’? Lesbian visibility and the consolidation of queer space in Montréal," Social and Cultural Geography, 2006), so there is an even more compelling need for such "retailers," and more importantly, for community spaces e.g., a "social center," which I have written about in terms of cultural communities and "facilities planning." 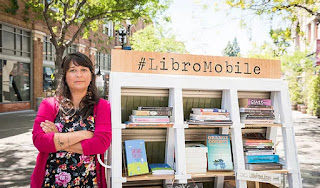 And this extends to other communities, such as Latinos.

There's a great popup Latino bookstore in Downtown Santa Ana, called LibroMobile which  in part a response to the closure of the area's foundational Latino bookstore in 2016 ("End of an era: Librería Martínez bookstore in Santa Ana becoming cultural and educational center," Orange County Register).  It's both an outside cart and an indoor space.

Some of the times I went, I had great conversations with the proprietor, Sarah Rafael García, an author, community educator, and performance ethnographer ("A Novel Bookstore Settles Down," Alta), and once with her husband, who wrote his dissertation on Chicano Park in San Diego,

The discussion in the journal article  "The Library and Its Place in Cultural Memory: The Grande Bibliothèque du Québec in the Construction of Social and Cultural Identity," about the National Quebecois library in Montreal (and others around Quebec) is relevant in how it discusses retention and communication of knowledge and media as an element of support for cultural communities. 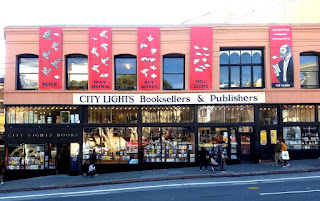 5.  Ken Sanders Books, Salt Lake.  People who watch "Antiques Roadshow" on PBS might have noticed Ken Sanders as a valuation expert for books and ephemera.  His used bookstore in Salt Lake is in a corridor that faces redevelopment, and his store needs to relocate ("Ken Sanders’ Salt Lake City bookstore will likely close next year," Salt Lake Tribune).

(I've suggested that he move to the Trolley Square development, home also to Weller Books.  That could create a "bookstore tourism" destination and there is a lot of vacant space in the retail center, so there is justification for a lower than normal rate.)