The Washington Post has an article ("D.C. is working on a futuristic plan: Less parking, taller buildings and a transformed city") about the likely approval of an update to the DC Comprehensive Land Use Plan.  The article focuses on how it promotes smart growth, the construction of new housing to allow for the city's population to grow, and sustainable mobility, that is, less of a focus on the automobile to get around.

Touching on everything from schools to parks to theaters to bike lanes, the Comprehensive Plan is a sprawling document that gets renewed every several years. The set of amendments proposed by Mayor Muriel E. Bowser (D), now being edited by the D.C. Council, reveal the potential for major changes meant to alleviate the city’s housing shortage, among other concerns, and prepare for a future shaped by climate change.

If the vision is carried out, it could turn D.C. into a place where fewer people drive cars, more pavement used for parking shifts to outdoor restaurant seating, and some people even pay a toll to drive downtown.

The plan envisions a city where Metro stations are public gathering places, apartment buildings have stoops where people congregate, and taller buildings abut older single-family houses. The amendments, which the council will vote on at two meetings this month before the bill heads to Bowser’s desk for final approval, allow for significantly more housing construction, especially along major corridors west of Rock Creek Park.

Obviously, I favor those kinds of policies, and frankly, those policies are in the existing plan, but sometimes in an unclear way.

But the fact is that the update process has been terribly flawed and in fact, undemocratic.

The problem with the process is that it was supposed to be an amendment cycle, not a full update, and there was a very limited and perfunctory public engagement process.

Then, after comments were received they said "oh, instead we're going to update the plan in its entirety."

There were some Council hearings, but not much of a public process, definitely nothing like what happened in the 2004-2006 cycle, where there were dozens and dozens of meetings, multiple hearings, a set of planning documents to set a foundation for thinking about the process and changes, etc.

Granted even if there had been a much more robust public process this time, a goodly number of people would oppose the density changes, which with no change to the height limit, aren't all that significant.

My complaint after the 2006 cycle is that there was never a post approval couple year road show to build consensus on what the plan meant in practice -- pro growth and anti growth people had very different readings from the same paragraphs.

So the reaction today is no surprise because the process is a repetition of earlier mistakes.

The zoning revision followed the 2006 plan and that was a 7+ year process (interminable) with plenty of gaps too.

Overall, I argued the city should have adopted a framework comparable to the Nashville Community Character Manual, where it's clear that most residential areas remain relatively unchanged in not threatened by massive change. The city considered the NCCM approach but decided it was too radical for people to absorb and accept.

My joke is I might be a s***** planner but I'm great at gap analysis and DC provides so many gap examples in planning that give me so many opportunities to think transformationally. (Even when I'm "stale" in coming up with new ideas and concepts, I'm way better than the average planner or elected official in DC...)

From the discussion in the article, it seems as if even with the various changes, there are still substantive gaps.

But that shouldn't be a surprise when there aren't multiple interpretations provided of the existing plan, and its "strengths, weaknesses, opportunities and threats."

Plans should include a chapter on urban economics.  Similarly, I think most master plans fail by not including an upfront chapter on urban economics and the revenue produced by different types of land uses, what is called "tax yield per acre."  Generally mixed use compact development has a much greater return, and lower costs to service, compared to more traditional sprawl forms of residential and commercial development.

People want the world but they don't want to pay for it.  By explaining how funding and financing a city works, maybe people would better appreciate the various tradeoffs and constraints that go into land use and transportation decision making. 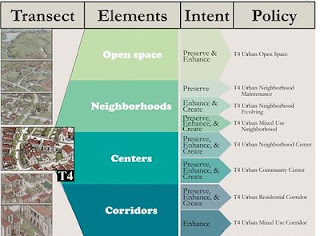 This graphic from the Nashville Community Character Manual is for "transect zone 4" (T4), which is the density scale and urban form of the neighborhood around the Takoma Metrorail station  It has 8 sub-zones, and the plan sets "community character priorities" which are set at the neighborhood/block levels and are defined through the "intent" category.
The manual defines three different intents, which can be used in various combinations:

Excepting ADUs (accessory dwelling units), of say 200 blocks in my greater neighborhood, only about 12--at the Metro and in the commercial district--plus 8-10 additional blocks along the railroad tracks that are zoned industrial, are subject to any intensification at all.

And that's pretty typical of the city.  Change is directed to the central business district (which the city extends as far as Union Station/NoMA on the east and the South Capitol Corridor on the south), and commercial districts and areas around transit stations.

While for the most part, residentially zoned areas don't change much at all.