Pre-pandemic, the biggest activity during National Bike Month tends to be "Bike to Work Day," which when people are working from home, isn't much of a thing.  The past few years I've used Bike Month and BTWD as the opportunity to opine on what I think should be advocacy priorities for biking as transportation. 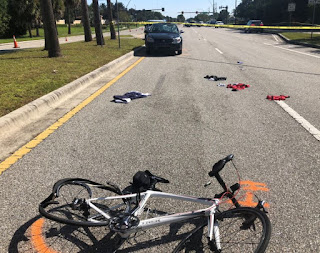 Will calls our attention to the Outside Magazine article, "Killing Cyclists Is As American As Mass Shootings."

To me the issue is more about how the US has set up a legal regime that excuses responsibility for motor vehicle related accidents resulting in injury or death, terming them mistakes that are avoidable usually but negligent, not malicious.

Journalist Malcolm Gladwell wrote about this a couple times in articles in the New Yorker, articles that are more than 15 years old "Wrong Turn" (2001) and "Big and Bad," about the drivers of SUVs (2004).

Only in cases of gross negligence like driving over 100mph or severe impairment from alcohol and drugs, are people tried and may receive jail sentences.  Otherwise, juries aren't inclined to "punish" drivers out of the belief that they could have done the same thing.

Bicyclists are merely collateral damage, as are deaths to pedestrians and other drivers ("Teen Son of LA Multimillionaire Admits to Manslaughter in Fatal High-Speed Lamborghini SUV Crash," NBC Los Angeles).

The Outside article recounts many examples of cyclist deaths.  Even if the specific stories aren't known to us cyclists, who tend to pay attention to such things, the general details are pretty common.

Driver screws up, cyclist dead, nothing of significance happens to the driver.

A car is much heavier and faster than a bicyclist (or a pedestrian) so we know how this turns out ("Cyclist deaths: Why you are 17 TIMES likelier to be killed on a bike than in a car," Mirror). 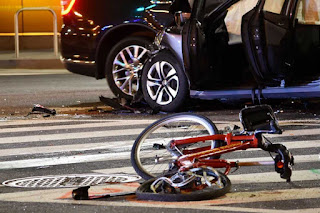 In DC, just last month, a bicyclist was killed by a negligent driver ("Bicyclist killed in crash tweeted just hours earlier about the danger of riding in D.C.," Washington Post).

Vulnerable road user laws.  The article does mention in a paragraph, something that would change things significantly, but doesn't develop it in detail:

Among the few slender rays of sunshine are so-called vulnerable road user laws (VRUs), promoted by cycling-safety advocates and currently on the books in ten states. VRUs provide stiffer penalties—six-month driver’s-license suspensions, large fines, and even 30-day prison terms, especially for drivers who injure or kill cyclists while breaking traffic laws. But widespread adoption of such laws may already be threatened by weakness in the knees among their very own advocates, some of whom apparently worry that VRUs will only give police new means of oppressing the oppressed.

US motor vehicle operator laws forgive negligence.  VRU laws aim to add some balance, recognizing that because cars are the most powerful vehicles, drivers should take more responsibility for this fact, and face extranormal consequences for their actions.

The Netherlands does this, making as the default charging the driver with responsibility for an accident.  But even in the sustainable mobility dominated Netherlands, it took a few decades before the nation changed its driver responsibility laws in this way.

And the law is more focused on financial consequences of being hurt ("Strict liability in the Netherlands," Bicycle Dutch).  The driver/car insurance is responsible for the costs, if any, imposed on the bicyclist from an accident.  It's not clear that drivers face more severe penalties.  From the article:

When Article 185 WVW is applicable, it means the motor vehicle user is liable for financial damage, unless that driver can prove the incident was caused by circumstances beyond his/her control. That will be hard, because the driver must then prove he/she drove flawless, or that his/her mistake was not the cause of the incident. If the mistake leading to the incident was made by the non-motorised road user, that mistake has to be so unlikely, that a motor vehicle user could not reasonably have considered it to happen. Failing to give way or jumping a red light (deliberately or by mistake) are not such unlikely events, they happen regularly, so drivers are not granted ‘circumstances beyond control’ very often.

But the Netherlands focuses on other elements of the road system as it relates to vulnerable users, prioritizing design treatments, reducing vehicle speeds, etc. in the aim of increasing safety and reducing crashes, injuries, and deaths.

-- "Vulnerable Road Users [in the] Netherlands," presentation, Ministry of Transportation

The issue is changing policy and practice away from the privileging of the automobile.  At least in those places where pedestrians, bicyclists, and transit users are much more prevalent.

-- "A reminder about how the entitlement of automobility is embedded into law and democratizes death by accident," 2014
-- "A "Vision Zero" agenda for DC," 2014
-- "DC and Vision Zero Revisited," 2015
-- "Updating Vision Zero approaches," 2016
-- "First global benchmark for road safety in cities published by International Transport Forum," 2018
-- "A more radical approach to "Vision Zero" is needed: reconstructing streets out of different materials to reduce speeds," 2019

The Washington Post: Metro: get virtual pay and ride a bike for free.
https://www.washingtonpost.com/transportation/2021/08/03/metro-capital-bikeshare-deal/