City and national politics, the rise in disorder and the Republican/Democratic narrative | Elections in Seattle and New York City

Last year I wrote about how the "defund the police" trope could be damaging to the Democratic Party's election prospects, in the same way that Nixon trumped Humphrey in 1968 ("Is it too late to change the messaging on "Defund the Police"? How about "Reconstruct Policing"?" -- although now I call for broadening the definition and delivery of "public safety" see "The opportunity to rearticulate public safety delivery keeps being presented"). 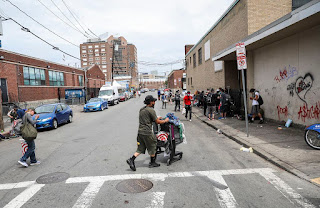 People gathered along the area known as Methadone Mile in Boston.  Photo: Erin Clark.    From "How should Boston fix the ‘Mass. and Cass’ area?," Boston Globe.

And it's fair to say that while Trump was not successful in fully painting the Democrats as the party of disorder, there's no question that Democrat losses in the House and the failure to take the Senate were in part because of suburban voters being fed up with Trump, but not in all cases, Republicans ("How ‘Defund the Police’ Roiled Competitive Races in New York" and "Has New York Hit a Progressive Plateau? The Mayor’s Race Is a Key Test," New York Times, "Is defunding the police 'Obamacare 2.0'? Democrats face challenge with voters heading into 2022," USA Today). 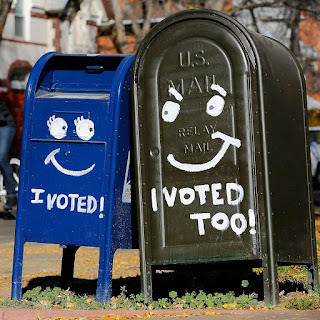 The cities where we are seeing steps backward especially are Portland ("Portland leaders condemn ongoing violence by ‘anarchists’," AP), New York, San Francisco ("The 'little things' are turning San Francisco bad in a big way," The Hill, "How California Homelessness Became a Crisis," NPR), and Seattle ("Why does prosperous King County have a homelessness crisis?," McKinsey),

Another place we are seeing that play out is in local elections this year in Seattle and New York City.  NYC's primary is today, but with ranked choice voting and many candidates it's hard to say who will win.  Seattle's primary is not until the first week of August.

In both elections, the rise in violent crime, especially murder (not unique to those cities, see "Murders Are Rising the Most in a Few Isolated Precincts of Major Cities," Wall Street Journal), and disorder associated with a significant rise in homelessness and people living on the streets is making it much harder for "progressive candidates" like Dianne Morales, who is especially hardcore compared to Maya Wiley, in New York and in Seattle ("Why 2021 might be the year of backlash in Seattle city elections," Crosscut).

And Republicans are working very hard to make rising crime the main argument against Democrats in the midterm elections next year ("Rising violent crime poses new challenge for White House," The Hill, "Biden launches an effort to head off violent crime — and political peril for his party," Washington Post).

In NYC, Eric Adams, Brooklyn Borough President and a former police officer, seems to be the leader, in part because of his police background, although it's possible as secondary votes are redistributed through the RCV process, he might not win.

Of course, Fox and similar media like the New York Post ("NYC progressives are going to lose the Dem primary to soaring crime") see this as all about crime and disorder.

OTOH, they might be right, and what happens in these elections, and maybe the Boston mayoral race, where crime and disorder don't seem to be prime issues ("Boston's Historic Race For Mayor Matters To The Entire Region. Why Aren't More People Paying Attention?," WBUR/NPR), will give some clues to how the Democrats will have to position in the 2022 House and Senate elections.

Cities and disorder.  Granted, dealing with crime and homelessness is complicated.  But I vividly remember what DC was like in the late 1980s and throughout much of the 1990s and what it cost me personally and I would never want to return to those times.

I have no problem with addressing crime, funding homeless services, and at the same time, broadening our definition of what public safety should be, how to fund it, and how to deliver it, while reversing the adoption by police departments of warrior policing, overpolicing and the crminalization of poverty and other social problems, which is thoroughly discussed in End of Policing.

While I agree with arguments about overpolicing and mass incarceration, at the same time, violent crime shouldn't be ignored, nor should disorder of various types including camping out in public spaces. 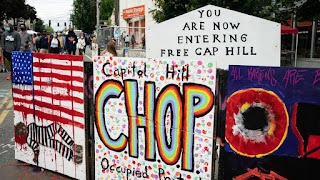 Seattle's CHOP/CHAZ certainly proved that expecting people to just all get along, not commit crimes, and self organize for security is "unrealistic" ("They envisioned a world without police. Inside Seattle's CHOP zone, protesters struggled to make it real," CNN, "What Really Happened in CHOP?," Seattle Met Magazine, "SEATTLE’S CHOP WENT OUT WITH BOTH A BANG AND A WHIMPER," The Intercept). 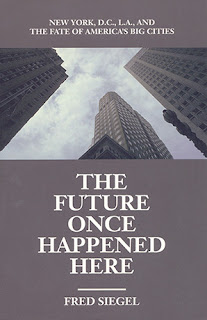 Somehow we need to strike a balance, but a kind of nullification of the recognition that disorder is not positive for cities, along the lines of Moynihan's "Defining Deviancy Down" is a move backward to urban decline, along the lines of what Fred Siegel wrote about in The Future Once Happened Here.
People seem to have forgotten that it was significant improvements in public safety--for example DC's number of murders went from  482 in 1991 to 88 in 2012, but have since risen, to 198 last year--that helped to spur in-migration back into the cities, for example DC has added more than 100,000 new residents in the past 10 years.

Siegel is considered conservative, but his book is very important.

In 2009, there was a column featuring an interview with Siegel in the Arizona Republic, called "3 Ways Cities Go Bad," and number one is disorder.  From the article:

Siegel believes there are three fundamental ways in which big cities go bad. The first is to lose control of order and civility in their public space - the streets, sidewalks and parks. This was an essential part of New York's deterioration and subsequent crime epidemic and the primary element of its recovery.

I told Siegel of a long walk my wife and I had taken from our hotel to Central Park and through Central Park to the Metropolitan Museum of Art, returning partially after nightfall. We felt not a moment of unease, were never panhandled and saw only three vagrants along the way. Siegel said such an excursion would have been unthinkable 15 years ago.

Even more remarkably, Siegel thinks this part of New York's recovery will endure. Previously, politicians dodged responsibility by saying that there was nothing that could practically be done to control the small acts of disorder and incivility - such as aggressive panhandling, public urination and a large presence of vagrants - that lead to a loss of control over public space and larger disorder that involves more serious crime.

This has been proved wrong and, according to Siegel, New Yorkers will not accept slippage among the politicians on this front.

In the book, he discusses "dependent individualism" and the "riot ideology."  The former I term "I can do whatever I want and you have to pay for it" and the latter as "if you don't give us x and y, we'll riot."

The other two elements of failure according to Siegel are dominance of local politics by municipal unions and a decline in the private sector as a fundamental element of the local economy.  He calls this  the "entitlement economy," where opportunity is derived from politics and political decisions.

Eric Adams won the #1 votes. Before absentees. Given the number of votes for women candidates, when they are redistributed, it's likely they won't go to Adams. So it seems as if Wiley or Garcia will win the primary.

The hardcore progressive candidate got few #1 votes, under 25,000.

A socialist wins the Democratic primary in Buffalo.

The stuff I've been reading think Adams has a strong lead that won't be countered by the two woman. We'll see. Overall like many changes RCV isn't a panacea, just makes more marginal candidates jump in and moves away from the hard work of coalition building.

Adams is an example -- basically the black and brown vote in NY.

Tried to send you this but the mobile version of wordpress just ate it up:


The Buffaloa candidate seems about as socialist as Marion Barry.

Yep wrt EA I was thinking more of the woman vote being more hermetic and it probably isn't, although it would have been interesting in either Wiley or Garcia ran but not both, and if they would have garnered more votes. There is the sexism issue wrt voting, so EA may still have won. Obviously we'll never know.

Actually I read that article. It's really great. I mean to put ii into the comments on my Oakland County articles. (Politico's articles on Elissa Slotkin were also excellent.)

BUT AT THE SAME TIME, it and an article by John Harris in the Guardian, are really insightful wrt messaging and the need for segmentation in the Democratic message.


I'd say very similar to the Guardian piece in some ways.

But these places are very oppositional to suburbs -- and the new, post Trump national democrats are very much a party of suburban white woman. So I'm not shocked that candidates are moving to extremes.

I'd say Cuomo's take is very good -- the incumbent was sleeping. US elections are about people, not just policy.

Hmm, part of the discussion about "India is deeply connected to her community" reminds me of articles about the Rashida Tlaib race. Tlaib faced again the Detroit City Council President, a woman who is black, and just over 60. Comments in the articles discussed how Tlaib was way more focused on constituent services and helping, especially during the pandemic. Despite her national profile, she remains connected.

(I remember a similar article about a state rep in Florida, who was more active providing help during the pandemic than many of her colleagues).

2. But yes, it is like the Harris article in some sense. You need to focus your message.

There were some other articles about the byelection. One guy wrote how Lib Dems would get crushed, he's a Lib Dem. And then wrote a mea culpa.

He said he wanted them to lose because they were running a pro-nimby campaign against planning changes allowing for more housing construction, and against HS2, and he thought those were bad positions.

Suzanne just got back from a trip to Seattle. She lived there for not quite 10 years in the 1990s.

She said many buildings the storefronts are boarded up even if the business is open. That the street people are angry and violent and heckle. There is a great deal of trash. And frequent defecation present on the sidewalks. She was really disturbed about what she saw.

Based on this, which sounded very grim, I do wonder about "backlash", if people will temper their progressivist support for the downtrodden with a desire for more order.

I'd say it's probably more pragmatic, a bit less focused on social justice that "defines deviance down" as opposed to equity issues.

I have written about her before.