Closing investigations without resolving them: the Nashville bomber 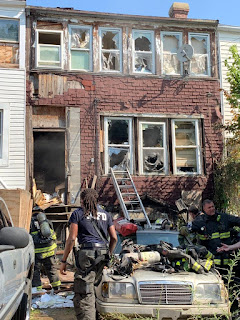 In 2019, there was a terrible fire at an illegal rooming house on Kennedy Street in DC, killing 2 people.  The thing is that a police officer had responded to an incident there, and reported the conditions to DCRA.

An inspector went there three times, couldn't get in, so he "closed" the complaint.  He had the legal authority to get a warrant for entry, but he didn't take that step.

It remained unresolved and dangerous.

The inspector was fired for "dereliction of duty" but says it wasn't his fault because he wasn't trained ("DCRA investigator speaks out about fatal Kennedy Street fire: 'People died in that place. It didn't have to happen'," WUSA-TV).

The city came up with a convoluted way to "deal" with this failure, creating a personalized process relying on people, not systems..

I countered saying the solution was simple ("Unresolved versus Closed as a determination in handing City inspection/service matters").

1.  Instead of having police officers call a supervisor who then was supposed to call DCRA, create a category for the complaint in the city's 311 "complaint" system.

2.  Don't allow complaints to be closed without being resolved. 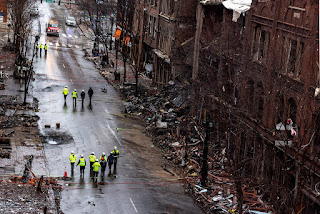 A row of historic buildings damaged by the the detonation of an R.V. packed with explosives in downtown Nashville on Christmas morning.Credit: Alex Kent/Getty Images.

The same thing happened with the Nashville bomber ("Suspect in Christmas Day bombing in Nashville acted alone and was driven by 'paranoia,' FBI says," ).

A complaint was filed, police went there, never got in, and closed the investigation without doing anything other than knocking on a door once or twice.

A report analyzing what happened said they could do more ("As Nashville Bomber Plotted, Police Investigation Into Warning Sat Dormant," New York Times).  From the article:

But a report released on Wednesday found no documentation of any attempts to reach Mr. Warner after officers knocked on his door and got no response. The report added that the police should have acted more aggressively, keeping closer tabs on Mr. Warner and trying to establish the probable cause needed to search his home. Instead, the case sat open for months, as Mr. Warner stewed in conspiracy theories and plotted the attack.

The report emerged from an inquiry into the police investigation conducted by a panel that included senior officials from the Metropolitan Nashville Police Department and others from outside the agency. The panel concluded that there was “no way to know for sure if the suicide bombing on December 25, 2020, could have been prevented.” Yet it identified ways in which the Police Department had failed to conduct a robust investigation into the earlier warning....

... the Police Department began drawing scrutiny as an incident report surfaced showing that a friend of Mr. Warner’s had called the police in distress more than a year earlier. She had told officers that he was building bombs in the R.V. parked beside his house; her lawyer, who also knew Mr. Warner, told the police that he was capable of building explosives.

The officers went to Mr. Warner’s home in August 2019 and tried to follow up, police officials said, but they had no probable cause to search the home or R.V.

Yet the panel said that the officers should have taken advantage of legal resources available to them to determine probable cause and gone further in pursuing the investigation...

The report ends with the police department saying they could have done better.