(It makes no sense to me that the National Trust for Historic Preservation releases its list of the "most endangered properties" in June, when National Preservation Month is in May.  2021 Blog entry.)

The National Trust for Historic Preservation released its annual list of most endangered properties last week.  This year each of the properties highlighted has to do with "people of color."

While I think that's great, and as usual, all of the properties listed have interesting, important histories that are deserving of protection, I don't think NTHP adequately leverages the public media and communications aspect of the list to draw attention to "structural issues present that make preservation more difficult."

By contrast, Preservation Chicago, in their annual "Chicago 7" list of endangered properties, often features at least one example that illustrates a systemic issue, such as lack of teardown protections for heritage properties, etc.

For me, there are a bunch of issues.

1.  Conservative state legislatures that preempt of the creation of local historic districts.

2.  Which is related to the rise of the property rights argument, and making it more difficult to designate properties or districts as historic, through the imposition of difficult rules, etc.

3.  Lack of local protection legislation in general.  People get all hung up about being listed on the National Register of Historic Places, but that only provides protection against federal action, not against anything else--especially private owners or local governments.

5.  Teardowns and the failure to have design review requirements to maintain the architectural integrity of what are rapidly diminishing attractive places.

6.  Lack of revolving funds and other monetary sources at the ready to respond to threats to historic properties.

7.  Local government officials being more interested in new development rather than the protection of particularly remarkable historic resources.

-- "Without remedies there's nothing you can do: historic preservation in Chicago and DC," 2014
-- "Historic Preservation Tuesday: Saving buildings vs. the right to petition to redress grievances," 2015
-- "Preservation advocacy may be more successful when companies are vulnerable to public pressure: Baltimore County vs. Fairfax County, Virginia vs. Robbinsdale, Minnesota," 2016 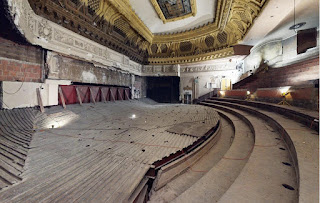 Utah Theater, formerly the Pantages theater, and part of a circuit of similar theaters in the Northwest.

In Salt Lake Ciy, the government is giving a historic theater to a developer for the site--after the building is demolished--to be incorporated into a tall apartment building ("With plans for a new downtown park, city moves closer to giving derelict Utah Theater to developers for demolition," Salt Lake Tribune).  It's true that the Downtown is home to other large performing arts facilities in preserved theaters.  But this building the Pantages is pretty amazing, at least before it was denuded of many of its distinguished features. 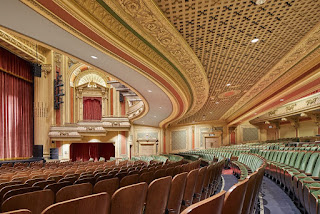 However, the city of Tacoma, Washington has preserved its Pantages theater ("Here’s a sneak peek inside Tacoma’s renovated Pantages Theater," Tacoma News-Tribune), which demonstrates just how remarkable the potential and opportunity remains with the theater in Salt Lake.  It now operates as part of Tacoma Arts Live, an arts presentation and revitalization initiative ("Tacoma Arts Live Releases Impact Report," South Sound Business).

Interestingly, apparently there is a mechanism that citizens can challenge the decision of the Salt Lake City Council, in a referendum, and there is an effort underway to do so.  Apparently it was not successful in getting on the ballot ("Movie buff chains himself to Utah Theater in last-ditch bid to save it from demolition," Salt Lake Tribune).

When places already have similar buildings preserved, sometimes it's hard to convince elected officials that it's worth preserving additional buildings.  To them, one or a couple is enough, three or more is too many, or unnecessary.