Riffing off the previous entry ("The East-West Divide | DC area regional economic development: anchors and where they are placed matter + airports | But military spending matters the most"), I don't think that the Connected DMV report touches on Baltimore "versus" Washington economic development.

1. Each metro needs to “get its house in order” by functioning and acting at a “best practice” level;

2. More efficient physical connections need to be constructed within and between the metropolitan areas; and

Baltimore used to be a major business center--in fact it was one of the nation's earliest centers for venture capital (Alex. Brown), but as corporations have consolidated (Alex. Brown, Legg Mason, T. Rowe Price, insurance companies) outside of the area, and as the US has deindustrialized--Baltimore used to be a major center for clothing manufacture, steel and ship production, and other production (GM had a plant there, etc.), in part because of the Port of Baltimore, that economic activity has declined.

Baltimore has regrown around its major universities, Johns Hopkins and the University of Maryland in Baltimore, which is centered on the medical and health sciences.  Both universities have spillover economic development initiatives in biotechnology, which are quite significant, but pale compared to Boston, San Diego, and San Francisco.

University of Maryland College Park has been interested in leveraging the sister campus in Baltimore and its medical and biotechnology focus.  UMCP has an engineering college, but no medical education facilities.  It does have an Agricultural college and USDA has an experiment station and the National Agriculture Library in nearby Beltsville.

The UMD Medical System (UMMS) is building a hospital in Largo, taking over the Prince George's Hospital system.  In the previous entry, I suggested that they could make a medical campus there in association with it.

Baltimore does have a tourist industry, although it has been dampened by the public safety fallout since the Freddie Gray death ("Broken windows/collective efficacy: Baltimore; Newark; Grand Junction, Colorado; Pittsburgh; Albany" and "Social urbanism and Baltimore").

Under Armour is a large producer and knowledge generator there, but it has had a problem moving to the next phase of development in comparison to major competitors like Nike ("How Under Armour Lost its Edge," New York Times).

I've argued that with Maglev, it would give another opportunity to redefine Baltimore's central business district as a major MidAtlantic business center, but I haven't yet written a post about it.

By contrast, DC has the advantage of the steady employment engine of the federal government and related contractors and such (lawyers, lobbyists, trade associations, etc.) and a transit network, and some federal requirements on maintaining various federal agencies in the city proper, which supports the health of the central business district and a thriving residential real estate market.

1.  My big thing is that Baltimore City and Baltimore County should merge, becoming the nation's 9th largest city, and redefining Baltimore's place and position in the regional, Mid Atlantic, and East Coast economy. 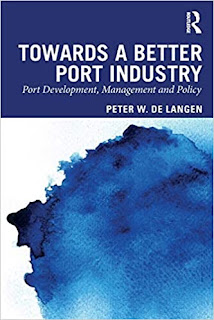 2.  Leveraging the Port of Baltimore even more, along with BWI Airport.  Maryland puts a lot of energy in maximizing the economic development potential of the Port.  According to Freightwaves:

The Port of Baltimore creates $3.3 billion in total personal income and supports 15,330 direct jobs and 139,180 jobs related to the work of the port. In addition, the Port generates nearly $400 million in taxes and $2.6 billion in business income.

Many ports have shifted to tourism-based activities.  Baltimore has managed to develop both, shifting to tourism in the Inner Harbor, while in Canton and Dundalk, maintaining and expanding economic activities focused on industry and maritime activities.
Can they do even more?
Are there opportunities to shift the mix towards industry as opposed to consumption.  It's a big center for transshipment of cars from foreign countries like Japan.
There is a cruise center aiming to make Baltimore a port of call for the cruise industry.
While there are maritime focused universities or colleges elsewhere in the US, Baltimore doesn't have one.  Rotterdam has a number of maritime-business focused education programs at its universities, including Erasmus, the Maritime & Logistics University of Applied Sciences, and the Netherlands Maritime University.
3.  Is the "aerotropolis" potential fully being captured by BWI Airport and are there linkage opportunities with the Port? ("Aerotropoli and rethinking the scale of mobility networks in the context of a global economy," 2013; "The BWI Aerotropolis: Is Now Its Time?," Business Monthly, 2016).
4.  Maglev could also help redefine the importance of the Central Business District.

5.  At the same time, Baltimore needs to build a true regional transit system comparable in scale and scope to DC's transit network, which while it has plenty of gaps, is more of a network than Baltimore's collection of somewhat connected lines ("From the files: Transit planning in Baltimore," 2012; "What to do transit-wise in Baltimore since the Red Line light rail program has been cancelled," Transformational Projects Action Plan" for a statewide passenger railroad program in Maryland," 2019; "Baltimore City Mayoral candidates views on transportation (and other matters)," 2020). 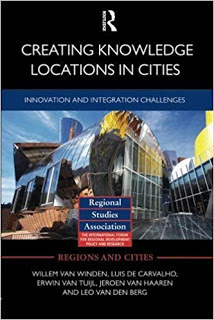 7.  Like DC, Baltimore needs to do a better job leveraging all of the higher education institutions within the city, not just Hopkins and University of Maryland. How do the engineering colleges at  JHU and Morgan State do with spillover business generation?

Creating an innovation district like Liverpool or "creative quarters" or "knowledge districts" is something to consider.

-- Creating Knowledge Locations in Cities: Innovation and Integration Challenges, Routledge (2010) [full text of the book, preprint]
-- "Developing Creative Quarters in Cities: Policy lessons from “Art and Design City Arabianranta, Helsinki," Urban Research & Practice v. 6:2 (2013)
8.  Work to improve the multiplier effect of federal agencies.  Another example of how certain types of federal agencies don't have spillover benefit for business development, Baltimore City and County are home to the Social Security Administration and the Center for Medicare and Medicaid Services.  But they haven't done much.
As discussed previously, the Aberdeen Proving Ground hasn't done much either.  However, the National Security Agency and Fort Meade have contributed to development around BWI Airport,  Lockheed Martin continues to close area facilities ("‘A major, major loss’: Closing of Lockheed Martin plant is end of an era for eastern Baltimore County," Baltimore Sun).
Figuring out how to better leverage federal presence should be a priority.

Well written and reasoned piece. Would love to see the city and county combine as you said hadn't seen anything on that before.

Arizona, Texas, Oklahoma, New Mexico. Tax incentives etc. Although I'd wonder about long term access to water, and the Texas political environment, which caused havoc with electricity access. Companies lost billions of dollars as a result of the freeze and the failure of the electricity generation system.