Republished from Friday September 10th, because I forgot to mention that effective last week, the City of Alexandria Virginia made its local transit service free. 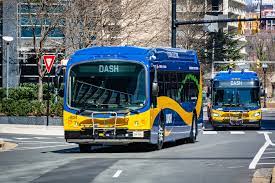 New graphic design for the livery of Alexandria's buses is considerably more spiffy than the old design.

I can't believe I forgot to mention that Alexandria, Virginia, which runs intra-city transit under the DASH banner, including a previously already free "trolley bus" on King Street between the Metrorail station and the business district and waterfront, implemented free transit last week ("Alexandria’s DASH is going fare-free. The city says transit should be considered public infrastructure," Washington Post).
That's a big deal.  It's the only jurisdictional bus service in the area where all the transit is now free.

It will be interesting to see if this has any affect on other jurisdictions, especially Arlington County, which for the most part is the most innovative community when it comes to sustainable mobility policy and practice.

And DC as it relates to Metrobus.

Dash didn't really make a lot of money from fares, so the amount of funding the city requires to substitute for fare revenue is comparatively small.  From the Post article:

The conversation probably started even before my time at DASH, and I’ve been here for a little over 4 1/2 years now. The question of the value of charging fares as compared to a fare-free service has come up quite frequently. And it really comes down to a question of how you view transit — whether you view it as a pay-as-you-go service or if you view it more as a public infrastructure, much like a road or a bridge or some other type of method to help people living their lives. And I think we’ve got local officials and DASH Board [of Directors] leadership who are coming together and recognizing that transit probably should be viewed more as infrastructure and as something that is open to all, regardless of your means. 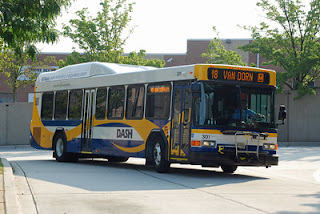 In the immediate term for this fiscal year, the city’s additional subsidy that they had to provide was about $1.47 million. Now, consider that DASH typically budgets for approximately $4 million or so in fares. But in the current year with the [pandemic] climate and with all the things that have been going on and reduced ridership in our projections, the gap was much smaller to fill this year. So I think in the immediate term, it was easier to figure out. 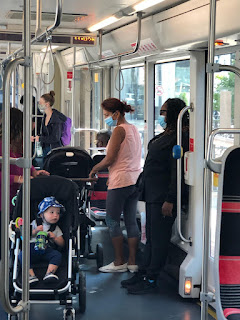 Will was on the streetcar today, running an errand on H Street NE in DC and sent me this photo.

It reminded me of something I was thinking about in terms of "transit equity."  I believe in it, but haven't always paid the right level of attention to it.

While I believe that free transit would be best, in most places that isn't practical ("Revisiting free transit in the wake of the decision in Kansas City ... and Lawrence, Massachusetts," 2019).

While I don't believe in decriminalizing fare evasion I do believe in facilitating transit access to low income riders, through discounted or free passes, something that the DC area hasn't been great about ("WMATA to consider lower cost/free transit pass for low income riders," 2020).

And rather than prepaying for a month's worth of a discounted pass, it's possible to create systems that do "pay as you go," which stop charging once the cost of a pass has been reached, as a result of paying fares one at a time ("New smart cards for Edmonton Transit boast a 'social justice' edge," Edmonton Journal). 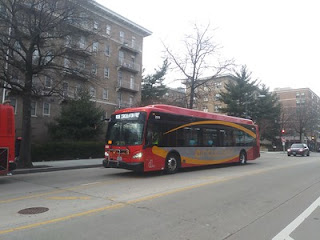 DC runs this system independent of the Metrobus system.

Although this was countermanded by City Council, but as many transit agencies did during the pandemic, the service was made free, although this will end September 30th.

In Boston, a couple years ago, then City Councilor Michelle Wu (now the leading candidate for Mayor) suggested that one of the bus lines running in the city be free, since it was relied upon by so many low income riders ("Two Boston city councilors want to make the Route 28 Bus free," Boston Globe).  From the article:

Boston City Councilor Michelle Wu, one of the outspoken advocates in the charge against the price hike, says it’s time for the “next step:” a public discussion on how to ultimately make one of the busiest bus routes in the city, free of charge.

The Route 28 Bus, making stops between Mattapan and Ruggles Station, carries around 12,000 riders on weekdays. The majority of passengers are low-income residents without cars and almost half don’t have a driver’s license, Wu told her fellow councilors this week. ...

“This would be a measure that would also ensure people have no barriers to access that economic opportunity corridor,” Wu said during a meeting Wednesday, where she and Councilor Kim Janey filed their request for a hearing on the proposal. “This is the route I think we need to have the conversation about.”

In Greater Boston, all of the transit services are run by the Massachusetts Bay Transit Authority, a state agency.  In July, MBTA announced they would test free transit on Route 28 ("MBTA launches fare-free pilot program on busiest bus route in Boston," WCVB-TV). 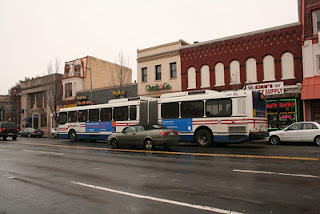 Should DC do the same thing on H Street NE?  It made me think about the X bus service along H Street NE.

It's one of the city's busy bus lines, with about the same pre-pandemic ridership as Route 28 in Boston.

But it "competes" with the DC Streetcar, which doesn't charge a fare.

Some people argue that the streetcar is a premium service, having free transit for the streetcar only is inequitable ("Transit "wokeness" in DC and Baltimore," 2021). One way to address this would be to make the X bus free, just like the streetcar.

Like the Circulator, the streetcar is a 100% DC funded and operated service.  And for DC to have Metrobus free there might be some things they have to negotiate with other members (Maryland and Virginia) of the Compact, and of course, they'd have to come up with the funding for it.

(Back in the day, when Seattle had a Downtown free fare zone, they made a separate payment to King County Metro to pay for it.  But it probably wasn't near enough, less than $1 million annually.  As a result of declining revenues due to the 2008 recession, the Free Fare Zone was discontinued.

Another way to improve DC bus service.  Elsewhere I've argued that bus service could be rebranded and repositioned is by switching to double deck buses ("Making bus service sexy and more equitable," 2012).

This wouldn't be a problem in DC in most cases, because traffic signals and powerlines don't cross the street in ways that would impede tall buses.  But it wouldn't work in the suburbs. 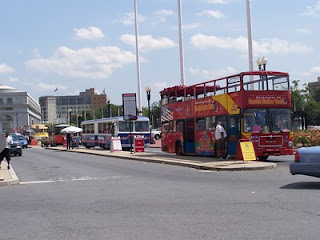 For profit double deck tourist buses already operate in DC, proving it can be popular and isn't particularly difficult operationally.

A few transit agencies in North America use double deck buses, but not many including Ottawa, Las Vegas, and Snohomish County, Washington.  They get tested from time to time in various places.

But I think the infrastructure issue--not just traffic signals and utility wires, but bus terminals need higher ceilings and such--ends up scotching the idea.