Every year Money Magazine publishes a list of communities under 500,000 population that it deems the "Best places to live," based on the following factors:
Interesting that these factors don't seem to include automobile dependence, transit access, walkable communities, etc. ("Extending the "Signature Streets" concept to "Signature Streets and Spaces"," "50 Reasons Why Everyone Should Want More Walkable Streets: from the Arup report, Cities Alive – Towards a walking world," "Further updates to the Sustainable Mobility Platform Framework").
The 2021 Best Places to Live list strongly leans to sprawl and automobile dependence, even if many of the communities on the list, like Franklin, Tennessee (#3), are more traditional towns with a Main Street like core.
And Boise, a larger city with a nice core, is #10--it's the rare example of a state capital that is actually nice. 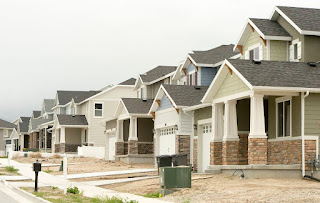 Rushton Meadows subdivision, South Jordan, Utah.  Photo: Rick Egan, Salt Lake Tribune, from "Some homeowners are at the mercy of unmonitored and predatory management companies."
"Ashburn" Virginia is listed as #5.  Is that a community or just a sprawl of subdivisions?  Same with Syracuse, Utah (#6), South Jordan, Utah (#27)  or Mission Viejo, California (#48).
These places are textbook examples of the sprawl land use and transportation planning paradigm.  (Even though Mission Viejo is gross, it is Southern California!)
For me, I'd be much more interested in the neighborhoods identified in the lists that were once published by This Old House Magazine.  Sadly, they stopped publishing this feature in 2014.
And looking at amenities in terms of some of the elements identified in "8 Components of Housing Value" and "Revisiting factors influencing housing purchase."